Last summer I put Dropbox on my Android phone, then panicked when I realized confidential documents were unsecured and only a click away on a device that was easy to misplace.

Today I installed a new release of the Dropbox app for Android from the Google Apps market with confidence. Dropbox has added lightweight security that is sufficient for my level of paranoia.

Dropbox was already an essential utility for anyone who uses more than one computer. What’s the next step beyond “essential”? Mandatory? Dictatorial? Godlike? The Dropbox features designed specifically for smartphones and tablets give you powerful, easy tools to move files and photos on and off the devices.

You can configure Dropbox version 1.1 on an Android phone to demand a four-digit “passcode” before it opens. It’s not the same as the password for your Dropbox account; it’s just four numbers, so it’s easier to remember. That makes it easier to guess, also, but there’s a checkbox to delete all Dropbox data from the phone after ten failed attempts to guess the passcode.

At some point Dropbox added the same feature to the apps for iPhones and iPads, so all mobile devices can have rudimentary security on files in Dropbox folders. 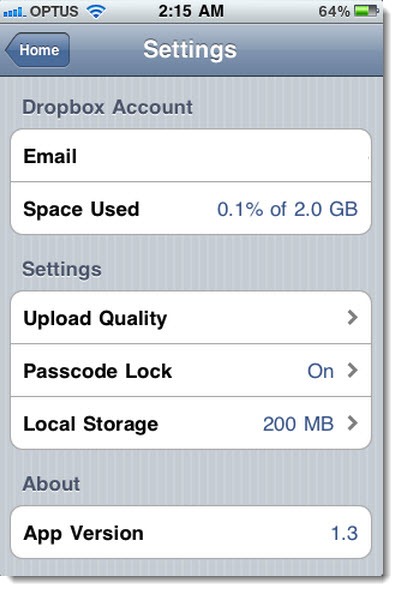 It was a big day for Dropbox. The iPhone and iPad app was upgraded to version 1.4, with a new, improved interface and new tools to upload groups of files and photos on your phone or tablet into Dropbox with a single click. Now Dropbox has become the easiest way to transfer photos and files from your iPhone to your computer, bypassing the hated iTunes USB cable. (One of the world’s great mysteries is why Apple has not given us a way to sync its devices with iTunes wirelessly.)

At the same time Dropbox announced that it has grown to more than 25 million users, moving and updating over 200 million files every day. I couldn’t understand how Dropbox had scaled to handle that volume of data until I discovered that Dropbox files are stored in Amazon’s massive global S3 storage system, which has essentially infinite capacity and has been built to be rock solid. You didn’t know it but behind the scenes Amazon is currently the world leader in cloud infrastructure and services, storing a mind-boggling number of files (262 billion objects at the end of 2010) and providing enterprises and developers with a huge array of services – databases, virtual servers, much more – with nary a hiccup.

Dropbox is the right program at the right time, now that we demand to have our stuff available on every device, all the time. Give Dropbox a try – get a free account, read about it, watch the videos on the Dropbox web site, and put it to use!