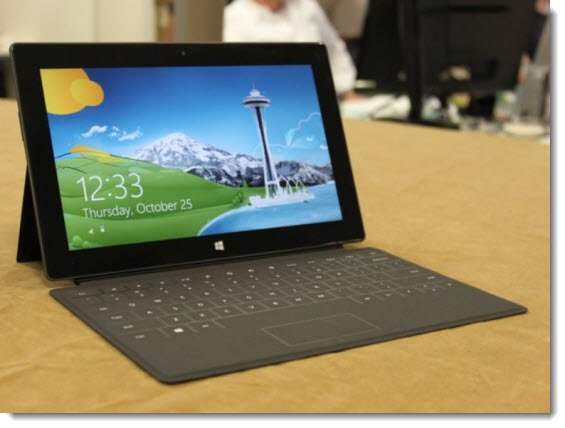 Previously: Some Thoughts On The Microsoft Surface Tablet (Part 1)

Because it is built on an operating system that appears identical to Windows 8, Microsoft’s Surface tablet has some features that set it apart from an iPad. This isn’t a full review of the Surface, just some of the reasons that my first impression is different than I expected.

The Surface screen has about as many square inches as an iPad in a different shape – wider, less tall. It feels different in the hand as a result, more like a notebook computer. Everything about the Surface reinforces that impression – the magnesium chassis, the squared off corners and the seamless high quality build, everything makes the Surface feel like a real computer instead of “just” a tablet. The Surface is about the same weight as an iPad but it’s more solid, denser somehow. 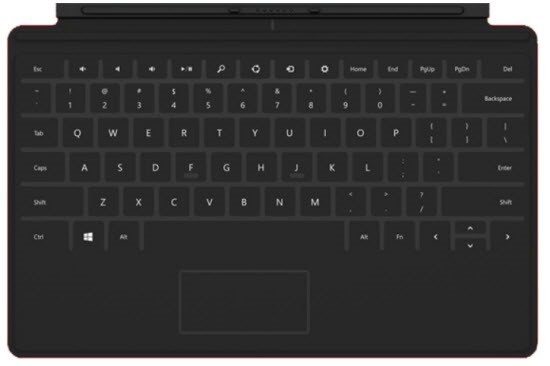 The thin “Touch” keyboard is about the thickness and weight of Apple’s folding iPad cover. It took some practice to get used to typing on it. (It’s shifted over to the left more than I expect so I keep missing the “a” key.) After an adjustment period, it’s become fast and natural to use on a desk. It’s not easy to use it in my lap, though.

When the Surface is set up with the keyboard and kickstand, it is so much closer to a notebook computer than it is to a casual consumption device like an iPad! It can even be connected to a Bluetooth mouse for better control over programs like Word and Excel that can be a little finicky for touchscreen use, making it completely indistinguishable from using a notebook.

The Surface has a login screen. It’s a Windows computer, after all.

Anyone in business whose documents or mail should be confidential has had a real problem with mobile devices. It’s possible to sync documents on an iPad with Dropbox or other services but the lack of security on those devices means that confidentiality will be compromised immediately if they are lost or stolen.

The Surface login means it can’t be used when it’s picked up without putting in a password. That’s an extra step that provides a crucial bit of protection for business users.

It also makes it less easy to pick up the Surface on the fly for casual use. There are two things that minimize the inconvenience with the Surface.

By default the Surface keeps you logged in for fifteen minutes before it returns to the login screen. You can close the cover, then open it within fifteen minutes and return to where you left off without logging in. (The time is configurable, and it’s possible to turn off the login requirement so the password is never required.)

Even better is the picture password to take advantage of the touchscreen. Choose a photo, then pick three gestures to draw on the picture as your visual password – lines, taps, circles. It’s far easier than typing a password and reasonably secure. Typing in your password is always available as a backup if you forget the visual gestures.

These aren’t unique to the Surface. iPads and Android tablets have various similar password protections available but seriously – have you ever seen anyone lock an iPad with a password? It misses the point. iPads are for fun.

Windows RT supports multiple user accounts on the same device. You can share a Surface tablet without giving up access to your mail and documents. This is a big deal.

iPads and Android tablets are essentially single user devices. An iPad is tied to a single Apple account, a single Dropbox account, and a single Amazon Kindle account, for example, and it does not handle mailboxes well for multiple people.

Windows RT handles multiple user accounts just like any other Windows computer. Each person gets a personalized Start screen, apps that are tied to their individual accounts, their own mail/contacts/calendar, their own file and photo libraries, and access to their own Skydrive accounts.

It’s easy to set up a Guest account so the Surface can be handed off with confidence that your mail won’t be read.

Windows 8 comes alive when you get your second Windows 8 device.

I’ve been using Windows 8 on my desktop computer and notebook, tied to a Microsoft account for syncing settings, so I had some idea of what to expect.

When I signed into the Surface with my Microsoft account, it immediately synced a long list of things that minimized the amount of setup. It was personalized the minute the Start screen appeared the first time.

My account picture is on the login screen. The lock screen shows the same photo that appears on my computers. The desktop wallpaper is synced. The color scheme for the Start screen is the same.

Because my Microsoft account is also my Office 365 account, my Office 365 mailbox showed up in the Mail, People, and Calendar apps automatically.

My long list of Internet favorites was waiting for me.

Skydrive on the tablet was connected to my account, providing instant access to all my documents and pictures.

One thing happened that I didn’t expect. My initial setup of the Surface happened when I was out of town on a hotel Internet connection. When I got home, I realized the Surface was online, connected to my office wireless network, but I hadn’t put in the security key. It turns out wireless network keys are synced by Windows 8, so my notebook and Surface tablet will constantly update each other as I connect to more networks.

Windows 8 can also sync passwords memorized by Internet Explorer, after a short bit of setup to confirm that each new device is “trusted.” I haven’t tested that because I’m a dedicated LastPass user (which has a Windows RT app).

Windows 8 and Windows RT tablets are something new, not just iPad wanna-be devices. They are designed for creating content and enhancing productivity, not just consuming content.

The limitations of Windows RT would disappoint many of you, especially in these early days when the Microsoft store is missing many important apps. Watch for Lenovo’s Thinkpad Tablet 2, running the full version of Windows 8 and due within the next two weeks, and Microsoft’s Windows 8 Pro Surface tablet early in 2013 – similar design but able to run all Windows programs.

Personally, I find the Surface RT tablet feels just right, satisfying my needs in a way that the iPad never could. Much of my work life is spent in email and Microsoft Word and Excel. That kind of work is comfortable on the Surface and virtually impossible on an iPad. Sure, there are apps that I miss and that I’m impatient to get on the Surface, but I don’t think I’ll be picking up the iPad often in the next few months.