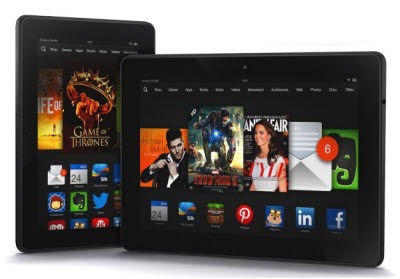 Although specific sales numbers aren’t available, we know that Amazon is selling millions of its Kindle Fire tablets to people who want a tablet for the lowest price and who are happy living in the Amazon ecosystem.

Last month Amazon announced the next generation of Kindle Fire HDX 7” and 8.9” tablets (available on October 18), with better specs and lower prices than anything else on the market.

The 8.9” Kindle Fire HDX has a very high resolution screen – 2560×1600, higher resolution than most 24” monitors – matched with a decent processor and reasonable amounts of storage and memory. Amazon claims at least 12 hours of battery life, much more if you’re only reading Kindle books. The Kindle HDX tablets are thinner and lighter than comparable iPads and Android/Nexus tablets.

Perhaps most important, the Kindle Fire HDX prices start below comparable Android tablets, and significantly below iPad prices – a full hundred dollars less for the 7” model, which starts at just $229. The larger Kindle Fire HDX is also priced well below Microsoft’s Surface 2 tablet, which has much less impressive specs.

Amazon starts with Android but customizes it for the Kindle Fire tablets until it is virtually unrecognizable. Some (but not all) Android apps can be run on the Kindle Fire tablets. In a twist, Amazon also built enterprise features into the new Kindle Fires – VPN client, encryption, and support for some mobile device management systems – and claims that Kindle Fire is already the second most popular tablet in the workplace.

Kindle Fire tablets are the best way to enjoy the Amazon ecosystem. They make it easy to buy Amazon products, easy to read Kindle books, easy to watch Amazon Prime videos, easy to listen to your Amazon music collection. That’s great, if that’s your world! Most of us are halfway there already. My e-books are all Kindle purchases and I use my Amazon Prime subscription constantly to buy everything from computers to paper towels.

In fact, one way to look at the Kindle Fire is as a device that helps you spend money at Amazon. Last year Jeff Bezos confirmed that Amazon happily sells Kindles at cost because its profits come from the books and other content people buy, not from the device sales. That gives Amazon a pricing advantage on the tablets that Apple, Google and Microsoft cannot match.

So what’s not to like? Cheap, great specs, more for your money than anything else on the market – it’s all good.

The same consideration should guide you on all your device purchases now: it’s all about the ecosystem. You’re not buying a device; you’re buying entry to an ecosystem, and your life will be easier if you stay within one walled garden.

Similarly, if your life is lived in Google’s universe, using Gmail on an Android phone, a true Android tablet will tie you into your Google world far more cleanly than the Kindle Fire.

Microsoft hopes you will feel the same way about getting a Windows 8 tablet and phone to tie you into the Microsoft ecosystem that starts on your computer running Microsoft Office. One of the important things to know about Windows 8 is that many of its best features come to life when you get your second Windows 8 device. It is very satisfying to see programs, settings, and files set themselves up on the second device because everything is synced through the cloud.

The Kindle Fire is a winner, then, unless you have some ties to another ecosystem that points you to another tablet instead – and many of you have those ties. Choose wisely!

It’s worth noting that Amazon has also released a slightly updated version of its Kindle Paperwhite reader for $119 (or $139 for a version that turns off modest ads on the sleep screen). The Paperwhite is for reading books, nothing else. It is perfect. It is the most perfect single-purpose electronic device on the market. You can read Kindle books on any device – phone, tablet, notebook, computer – but trust me and get a Kindle Paperwhite for reading anyway.