LastPass released a major update this week. LastPass 3.0 gives the essential password manager a streamlined look and introduces some new features. If you’re a LastPass user, you’ll see some new things happening onscreen as you move around password fields. Don’t be unnerved! The changes will seem to be for the better, I think, after we get used to them.

LastPass is a free program that memorizes each password typed into a web site and automatically fills it in when you return to the same site. Once it’s up and running, the master password for LastPass is the only password you have to remember. Here’s an introduction to LastPass basics.

It can also be used as a digital encrypted notepad to record other private information – bank account numbers, credit card information, Social Security numbers, locker combinations, and anything else you need to remember.

LastPass syncs your passwords with all of your devices. There are versions of LastPass for all major browsers on Windows, Mac and Linux. For $12/year, LastPass Premium lets you run its app on all mobile platforms – Apple iOS, Android, and Windows. When a password is memorized by LastPass on one device, all of your other devices immediately know the same password.

It’s worth mentioning the most important consideration: LastPass is safe to use. As long as your master password is private, no one can get into your LastPass Vault. The company never has your master password in any form and never has a decrypted copy of your data. If the bad guys or the NSA got into the LastPass servers, they would not be able to decrypt your data. And yet all your computers can open the vault in seconds. It’s a very clever, very safe system.

There are many other password programs – KeePass, Roboform, and many more. Which one is best? You will decide firmly that the best one is whichever one you learn how to use. I’m convinced that LastPass is the best because it’s the one I know. Here’s a pro secret: it doesn’t really matter which one you use as long as you use complex passwords and you don’t use the same one on multiple websites.

The password programs sometimes do not work automatically when confronted by web sites with difficult designs. LastPass does not always fill in the blanks. Think of a password program as a secure and flexible notebook to jot down your passwords – better than the notebook in the drawer but the same effect. If it also magically fills in forms and password boxes, that’s a nice bonus, but its main job is to give you a place to look things up.

I’ll mention some of the new features briefly. This article from LastPass describes everything in more detail. If you’re a LastPass user, you should take the time to go read about the improvements at more length! Knowing how to use LastPass can improve your experiences online many times each day. 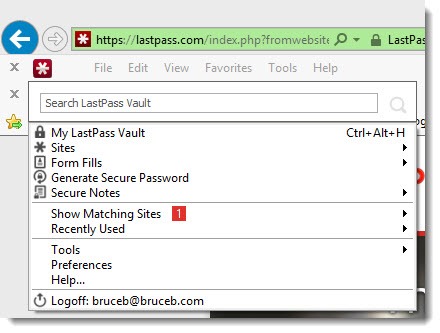 Your first task is to make sure you have the new version. Click on the LastPass icon in your browser. The menu has been streamlined and shortened in the new LastPass version. You have the update if it looks like the above picture, with a search box at the top and Secure Notes at the end of the first section.

If you don’t have it and you’re not prompted to install the update automatically, go to this download page and install LastPass 3.0.

There has been an overall sprucing up of the program design. It’s more consistent in all the browsers on the different platforms. The iOS and Android apps got a big overhaul to make them more attractive and simpler to use. 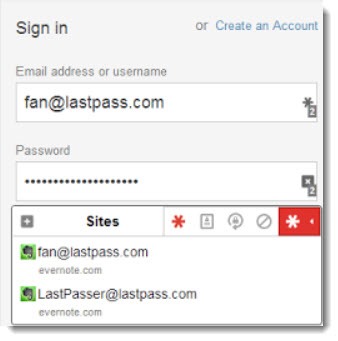 When your cursor hits a field for a login name or password, LastPass drops a window down immediately below the field with the options that make sense. You don’t have to look at the top of the browser window for the LastPass bar.

In the picture above, LastPass has dropped down the “Sites” window showing possible matches to fill in the user name and password fields. You’ll get a similar dropdown to generate a secure password, to save a new password, and to fill in forms.

You’ll see LastPass icons on the right side of user name and password fields. Clicking on the icons drops down the LastPass choices for that field. You can also right-click in fields and use LastPass from the right-click menu, as before.

When you click the LastPass icon at the top of the browser, you’ll see the simplified menu with one addition: you can search the LastPass Vault right from the menu, without opening the Vault in a separate tab. That’s subtle but important, the kind of change that might save you time every day.

This isn’t new but you might not have noticed: when you look up something in LastPass, in the Vault or by searching from the new menu, you can right-click and copy the username or password to the clipboard. That makes it easy to look up a password and paste it into a web site when necessary.

This is a major upgrade that affects releases of LastPass for multiple browsers on several platforms. It’s probably not a surprise that the LastPass forums are buzzing with people reporting various problems. You might have some unexpected issue after the upgrade. (My issues: Internet Explorer is crashing more frequently and the search menu is missing from the top of the menu in one browser on one computer.) Frustrating, I know. All I can offer is perspective: you might have unexpected issues after any update to any program or to the OS, and there are updates constantly. Be patient and generous of spirit.

Get your passwords under control and – be careful out there!