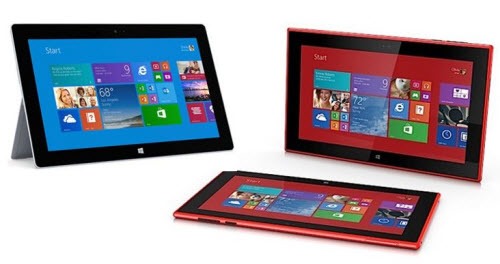 A few quick notes about recent developments in the world of Windows tablets.

Nokia released the Lumia 2520 before Christmas without an accompanying keyboard. It’s been an odd delay, since the keyboard is an important part of why Windows tablets are more of a productivity device than iPads or Android tablets.

Nokia is not exactly being transparent but it tweeted this week that keyboards are finally beginning to ship.

Consider the Lumia 2520 if you’re shopping for a Windows tablet. The Lumia 2520 is a great tablet, comparable to the Surface 2 but with a softer design and built-in 4G LTE connectivity with a Verizon or AT&T data plan. The keyboard includes an additional battery, adding another five hours to the already generous uptime.

Microsoft’s acquisition of Nokia will be complete next week. There is no word yet on what that will mean for the devices on the market today. Microsoft will support the Lumia phones and tablets that have already been sold, but it also might re-brand them or even yank some off the market. The Lumia 2520, for example, is a close cousin of the Surface 2. It’s possible to imagine that Microsoft will decide it wants to focus on the Surface line and the Lumia 2520 will disappear. Or not. No one knows.

When Microsoft introduced the Surface tablets in 2012, it was optimistic, so it manufactured huge warehouses of them ahead of time. Most of them went unsold, leading to a highly embarrassing writedown in 2013.

When the holiday season approached in 2013, Microsoft had nice new upgraded models of the tablets but did not want to be caught in the same PR debacle, so it pessimistically ordered relatively few of the Surface 2 and Surface Pro 2 tablets. They almost immediately sold out and the tablets continued to be unavailable for the last few weeks of the holiday shopping season. In fact, it was nearly impossible to buy a Surface tablet until this week, when a few models began to appear in Microsoft’s online store. Tonight you can buy a 32Gb Surface 2 (but not a 64Gb model) and a 128Gb Surface Pro 2 (but not a 64Gb, 256Gb, or 512Gb model). The keyboards – Type Cover 2 and Touch Cover 2 – just came back into stock in the last couple of days.

It’s better than a $900 million dollar writedown but it’s still not a good reflection on Microsoft’s retailing skills.

There are reports that a firmware update released a few days ago fixes the battery issue. It’s not clear if the fix is reaching all affected Surface Pro 2 owners but it’s imminent, in any case.