Upload Your Photos To Google: Trade Privacy For Big Rewards

Google Photos is the free service introduced last week that gives you unlimited online storage space for your photos and makes them as easy to search as email or files. It has taken the world by storm, and for good reason: the data analysis transforms it into far more than just another photo app. Google is giving away the ability to relive our memories in a way that requires no effort, with tremendous rewards. We are paying a price when we give mounds of private information about ourselves to Google but most of you will find it a price worth paying.

Auto upload photos from your computer

Google Photos was presented as a mobile app for iOS and Android to upload your phone’s Camera Roll, but the next day Google added desktop apps for Windows and Mac to upload the photo library from your computer. You can install a small free program and set it to watch your Pictures folder or any other folder you choose, including folders on network devices and SD cards. The app uploads all of the pictures and videos from those locations, then watches them and uploads any new files added to them later. 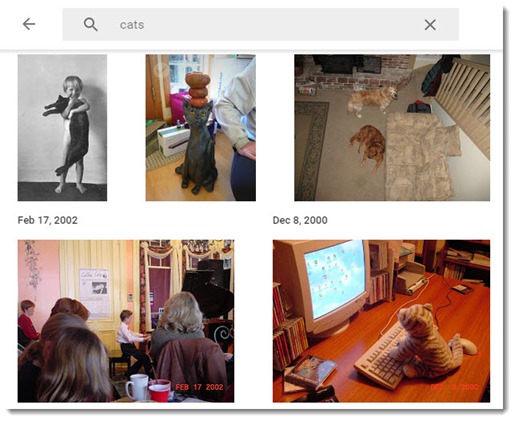 It took 2-3 days to upload our 20,000 family photos. A few days later, I’m able to click on a thumbnail of one of my sons and see pictures that pick him out in photos extending from college back to kindergarten. It is a dizzying display of techno-magic to see it identify him correctly through the years! I can click on my dad and see dozens of forgotten photos from my childhood. If I search for “cats,” I get cat pictures. And a picture of a goofy cat statue. And a stuffed cat. And my son playing piano under a sign that says “Coffee Catz” hanging on the wall behind him. Trust me, if you’re not amazed, I will give you all your money back!

Apple CEO Tim Cook delivered a broadside attack on Google at a conference last week, making the case that Apple will guard your privacy more vigorously than Google. "You might like these so-called free services, but we don’t think they’re worth having your email or your search history or now even your family photos data-mined and sold off for God knows what advertising purpose," Cook said. "And we think someday, customers will see this for what it is."

His point is well taken but it deserves close consideration.

Your photos are not shared by Google with anyone. There is some ambiguity in the privacy policy about what it might do in the future but for now, "we have absolutely no plans to do anything from a monetization or ads perspective," says Google Photos boss Anil Sabharwal. Google says fairly explicitly that it will not use your photos for any promotional purpose without your permission.

There is, however, a staggering amount of data analysis at work on your photos to extract information about you. Google has developed so much computing capacity and has made its algorithms so robust that it is giving away big data analysis for free. From our perspective, that allows us to do magical searches and bring up party pictures by doing a search for “birthday.”

The same analysis means that Google knows everything about us that can be learned from our pictures. It knows where we live and who’s in our family. It can figure out what brands of clothes we buy. It knows where we go on vacation and who we travel with. Google can figure out if you’re house shopping or pregnant or celebrating a new grandchild. It can guess your income level. Even more of yourself is opened up if you use Gmail or Google Calendar. Imagine how little is secret if you plan your trips with Google Maps and your Android phone tracks your location through the day!

Obviously Google intends to make money from advertisements and plans to use its deep knowledge of you to target those ads. The results will sometimes feel creepy or invasive – “how did it know?” There’s an interesting thing to remember, though: Google may know everything about you but it does not share that knowledge with advertisers. That’s not Google’s business model. Instead, it takes money from advertisers and promises them that it will use its best efforts to get their ads in front of people who will be receptive to them. Google runs the ad network and it makes decisions about which ads appear on the web pages you visit.

You’re always being shown targeted ads as you travel around the Internet but most of them aren’t being targeted very well. If Google leans on the data it has analyzed about you to show you more relevant ads, that’s actually a step forward, not backward.

The tradeoff, then, is whether the rewards – the searchable photos, the magically relevant cards that turn up in Google Now – are worth the price of having Google know everything there is to know about you. There are two risks: (1) the risk that the government will obtain that data from Google and use it for purposes that you don’t like, and (2) the risk that Google will turn out to be an unreliable partner and will give that information directly to advertisers who will abuse it. Both are reasonable concerns. The answer ultimately comes from a gut decision about whether we trust Google. To some extent, many of us have already made our decisions by using Gmail and Google Maps and the other Google services.

Apple’s business model is based on selling premium hardware. It may differentiate itself by collecting less of your personal data and therefore creating less of a risk that it might invade your privacy, as Tim Cook said this week. The reward for being in the Apple ecosystem, then, would be the pleasure of having premium gadgets and feeling more secure in your privacy, but getting less personal feedback – ads that are targeted less precisely, photo services that seem half-baked in comparison to Google Photos.

Google Photos is an incredible tool for organizing and searching our growing collections of photos and videos. It’s unsettling to give away all the details of our lives and our habits to an advertising company. I’m doing it anyway, because the rewards are worth it.