A lot has happened with LastPass recently – an acquisition, a new version of the program, a redesigned logo, and maybe some new problems running LastPass in Internet Explorer. Let’s take it one step at a time.

If you’re new to LastPass, it is the essential cloud service for storing passwords and other confidential information. Here’s a brief description of LastPass 3.0, and here’s a series about the basics, the Secure Notes feature, and Form Fill. I recommend LastPass for everyone. If you’re not using LastPass, go read about it and start to use it! It’s an essential part of your online security. The more you use it and become familiar with it, the more you will appreciate it. Trust me.

In October 2015, LastPass was acquired by LogMeIn.  That caused some anxiety – LogMeIn is well known for being a terrible company with abusive business practices. It is telling that the LastPass blog post announcing the LogMeIn deal had to be edited after a day of fierce criticism, with the CEO feeling it was necessary to add: “I want to personally assure you that this is good news . . .”

So far there have been no changes traceable to the acquisition. Despite the fears of LogMeIn critics, the price for LastPass has not been suddenly jacked up and it hasn’t been filled with useless “features.” LastPass appears to be operating independently, as promised. So far. 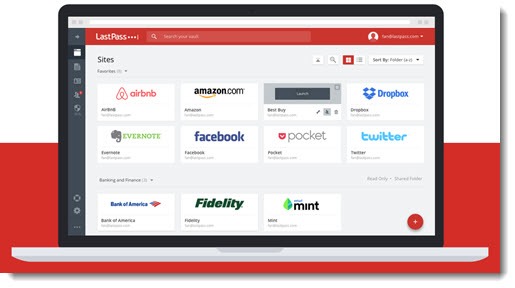 In January LastPass 4.0 was released, combining a major refresh of the online view of your passwords – the “LastPass Vault” – with updates to the Windows and Mac desktop programs and all  the mobile apps. There are some interesting new features and the Vault looks great. Upgrades are automatic; you almost certainly have the upgraded version by now.

In February, LastPass changed its logo. The new logo is at the top of this article. It displays three dots and a cursor instead of asterisks. The announcement of the new logo made it clear that this was a decision forced by “an unanticipated trademark lawsuit,” which must not have ended well. (The lawsuit was brought by E*Trade. Be glad you don’t practice intellectual property law, where you might have to argue with a straight face that E*Trade’s logo was somehow compromised by the LastPass logo because they both have an asterisk, despite having no other similarities and involving wildly dissimilar businesses. Yuck.)

If you’re a LastPass user, that’s why your browser has three dots in the upper right corner, and password fields have three dots on the right. Personally, I think it’s horrible. A month later and I still keep thinking that LastPass isn’t running because the three dots don’t look right. 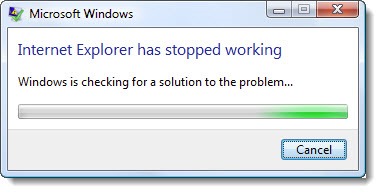 I’m suspicious that LastPass has been causing crashes in Internet Explorer in Windows 10. I can’t prove it and I don’t see much online feedback about it. See if this description sounds familiar.

All too often for the last 2-3 months Internet Explorer would display any or all of the following symptoms:

•  When IE was started, it would hang on a white screen for 3-5 seconds before loading the home page.

•  Some page changes would display the new page but then refresh the page after 5 seconds or so, undoing anything I was doing on the page during those five seconds. That seemed to happen more often (or perhaps exclusively) on pages with a password field.

•  IE would crash with a “stopped working” window. Clicking “cancel” or “close program” would frequently cause the error window to close but leave the actual IE window displaying the new page in place, apparently fine, as if no crash had occurred.

I saw it on my aging desktop computer. I saw it on my new Thinkpad laptop. I’ve seen it on client computers. And I got really annoyed when I started seeing the same symptoms on a brand new desktop PC that I’ve been setting up this week.

There was nothing specifically pointing to LastPass, but it kept coming back to mind because bugs in the LastPass add-ins have caused problems in browsers before. A few days ago, I disabled the LastPass add-ins in Internet Explorer as an experiment. (Click on the gear in the upper right / Manage add-ons.)

Since then, Internet Explorer has been solid as a rock. It loads fast. It hasn’t crashed once. There have been no odd page refreshes.

That’s when I realized that I had turned an interesting corner. LastPass is far more important to me than Internet Explorer. I use LastPass more heavily than you do, sure, because I have client passwords stored in it as well as my own passwords and secure information. I’m in LastPass dozens of times a day. I pay $12/year and run LastPass on my phone – an experience which has become compelling now that LastPass integrates with Touch ID on the iPhone so it can be opened without typing in the master password.

You may not use it that heavily but I’ll bet it’s still valuable for you, maybe enough to get you to switch browsers. Because you know what else runs fast, steady as a rock, with no crashes? Google Chrome, running LastPass.

Internet Explorer is on its last legs. Microsoft is struggling to get its replacement, the Edge browser, into shape so it can run LastPass, but that is months away at best. I’ve switched over to Chrome nearly full time. For me, it just works.