Windows 10 Tip: Turn On System Restore! (Because You’ll Really Miss It If You Need It And It’s Not There)

System Restore is turned off by default in Windows 10. It’s not used often but it’s absolutely crucial when you need it. If you’re running Windows 10, I want you to go turn it on if it is disabled on your computer. (As always, this advice is for normal non-technical individuals and small business users. If you are technically savvy or have complicated computer setups, I encourage you to do more research and draw your own conclusions.)

Let’s do the useful part first, then go through some background.

•  How to enable System Restore on Windows 10

•  What is System Restore?

•  Why did Microsoft disable System Restore?

How to enable System Restore on Windows 10 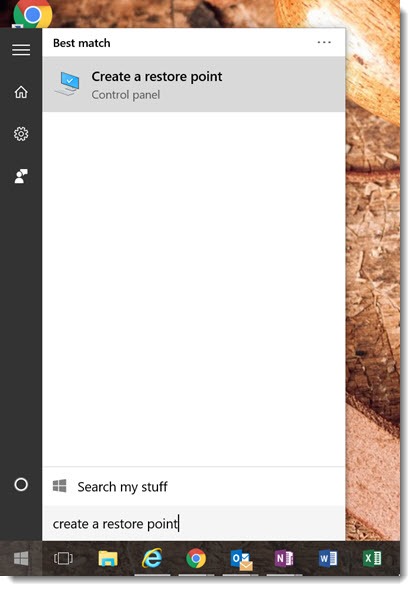 Click on Start. Type in Create a restore point and click on it when it appears on the menu. 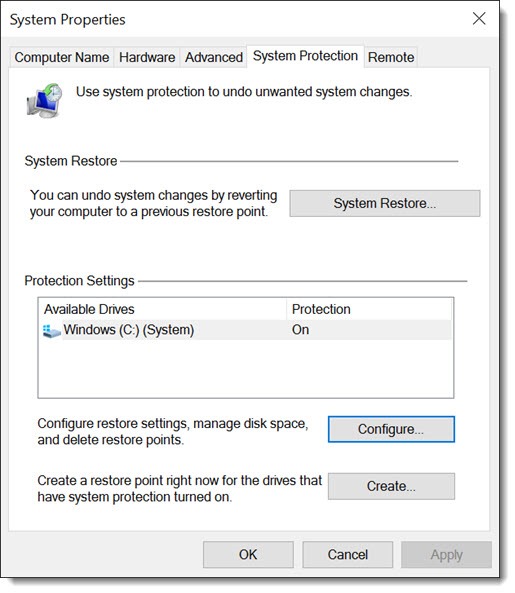 System Restore is set up separately for each drive. It only needs to be turned on for the drive where Windows is installed, usually the C: drive. If it says “Protection: On”, like the above screenshot, then you’re done. System Restore is running.

If it says “Protection: Off”, then highlight the C: drive and click the Configure button. 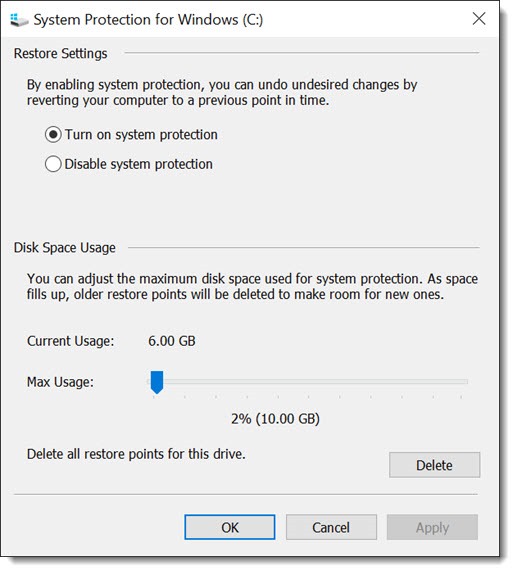 What is System Restore?

First let’s make sure you understand what it’s not. System Restore has absolutely nothing to do with your data. It does not back up your files or pictures. Your stuff will not be better protected after you turn it on. You still need to turn on File History or do cloud backups or whatever your choice is to back up your files.

System Restore backs up files related to running Windows – registry files, drive and boot configurations, and hardware drivers. It takes snapshots automatically before certain kinds of changes: before updates are installed to Windows; before some drivers are installed (an update for the video card, say); and before some software updates. If the changes cause problems for your computer – anything from distorted colors to being completely unable to start – System Restore allows the computer to be rolled back to its previous condition. Again, to be clear, System Restore does not touch your data. If you use System Restore to restore the computer to its condition three days ago, you will not lose three days of files or email.

Windows 10 requires timely installation of updates. Microsoft has removed many options to delay or avoid updates as a way to ensure that all computers are continually protected and up to date. In the six months since Windows 10 was released, there have been the typical security updates and bug fixes, there have been several “cumulative updates” that include many different fixes in one package, and in November there was a major refresh of the entire operating system that added new features. The update system has been smooth and trouble-free for almost everyone.

That’s the situation that System Restore is made for. It allows you to roll back to the condition of your computer the day before the failed updates. It replaces the registry with an earlier version, it restores hardware drivers to their pre-update condition, and it frequently returns the computer to a usable state. There will still be some work to be done to find out why the update failed or else the same thing might happen again, but at least the computer returns to being functional.

In the right circumstances, using System Restore is far easier than the Reset and Refresh features built into Windows 10. It is one of the options in the automatic repair environment that appears when your computer is unable to boot up three times in a row. There’s a nice summary here of how to access it and use it. This is an advanced tool that might be better suited for your IT support person – but trust me, your friendly IT consultant will be very happy to find it running if needed!

Why did Microsoft disable System Restore?

This one has taken me completely by surprise. I had two dismal experiences with Windows 10 computers that could not start after updates went sideways. In each case I found myself staring at a message that no restore points were available, turning each recovery into a much more difficult ordeal. It took me a month to tumble to the reason, which is that Microsoft has deliberately turned off this feature in Windows 10 for some computers. I have been looking at Windows 10 computers in the last few days and cannot find any pattern to when it is enabled or disabled.

The worst part is that Microsoft has offered no explanation whatsoever. Do a search through Microsoft’s technical bulletins for Windows 10 System Restore and you will turn up . . . nothing. (There is an inaccurate reference to it on this page about Windows 10 recovery options, which is written as if System Restore will be readily available. In fact, it encourages you to turn it on.) It’s been fully documented in previous versions of Windows but something has caused it to be the Recovery Tool That Must Not Be Named in Windows 10. I cannot find any public comment by Microsoft whatsoever that explains why it has been deprecated in Windows 10.

System Restore was introduced more than 15 years ago in Windows ME. (Remember Windows ME, the disastrous followup to Windows 98? When I think of Windows ME, Vista, and Windows 8, I get misty and emotional about Microsoft’s commitment to keeping IT consultants employed.) It has been part of every desktop version of Windows since then – and it’s always been turned on by default until Windows 10.

Unlike previous versions of Windows, there is no direct access to System Restore from the Windows 10 Start menu. There is no tile to provide quick access. A search for “system restore” will sometimes (but not always) bring up the unintuitive “Create a restore point” item that brings you to the correct window.

The only thing I can guess is that System Restore is considered to be a legacy tool that can and will be supplanted by the Reset options in the modern Settings panel (Settings / Update & Security / Recovery). Those options are invaluable but they also require much more work when a simple hardware change or failed update has caused a problem. You can reset your PC in Windows 10 and leave your files intact – but it will remove every program you have installed other than the apps you have installed from the Windows Store, which is roughly none of them. That mean reinstalling Office, Acrobat, Quicken, utilities, and all the other programs you use to get work done. Here’s Microsoft’s explanation of the recovery options in Windows 10.

Turn on System Restore. With luck, we will never mention it again and you’ll never need it. But if that day comes, our conversation will be much more upbeat if I can find a System Restore point to get you back up and running.