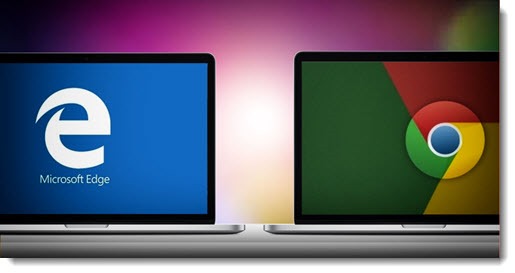 Microsoft Edge is the web browser that Microsoft developed to replace Internet Explorer. When you upgrade to Windows 10, Edge is set as the default browser, regardless of your previous settings. It is also set as the default program to open PDFs, even if you were using Adobe Acrobat or some other program designed for PDFs.

Microsoft Edge is a terrible browser. When Windows 10 was first released, Edge was so unfinished that it would not even fairly have deserved the label of being a beta. In the eight months since then, Edge has not matured one whit for regular users. Microsoft has recently released early previews of upcoming features for testers, and it’s possible – not even promised, just possible – that Edge will be slightly improved when Windows 10 gets a major update in July, a full year after its release.

If Microsoft delivers all the updates on the roadmap in July, then Edge will finally – finally! – be ready to be judged. And when it is judged, by all indications today, it will be judged to be inferior to Google Chrome in almost every way.

It is embarrassing. I don’t care what the consequences would have been. Windows 10 should not have been released with Edge set as the default browser. Maybe Microsoft should have bitten the bullet and left Internet Explorer in place until Edge was ready. Almost certainly it should have left our defaults alone during upgrades. The choice they made – to have you see this unfinished, unappealing, barely functional browser as your first experience with Windows 10 – is the biggest mistake that Microsoft made with Windows 10.

Let’s go through some of the specifics. Don’t get lost in the details. The big picture is that there is nothing whatsoever where Edge is expected in July to do a better job than Google Chrome does today.

The first thing a browser has to do is display web pages. Internet Explorer is showing its age and there are more sites all the time that do not display correctly in IE as it fails to keep up with evolving web standards. Edge is built to support current standards and most websites display correctly in it. Yay! Microsoft’s web browser can display websites! It’s not much, but a journey of a thousand miles begins with, you know, a step. Given that it was a priority to make Edge standards-compliant, it’s a bit surprising that Edge came in last on one recent test of HTML 5 compatibility, but it is good enough and that’s unlikely to be a problem.

The marketing angle for Edge was intended to be its speed. From Microsoft’s web page promoting Edge: “Microsoft Edge leads other browsers in speed performance. Microsoft Edge ranks first when put to real world page load tests.” Chrome has been the undisputed speed champ for years. As of today, Edge is quite fast in some tests . . . and pretty mediocre in others, according to the same recent test. It’s fine but Microsoft has its work cut out for it if it’s going to advertise Edge as the best choice because of its fast performance. To be honest, the speed difference between Edge and Chrome is unnoticeable in daily use.

Lack of support for extensions

An asterisk has to be put on those speed tests, though. Google Chrome is known to slow down when you begin installing extensions, little add-in programs that run in Chrome to add features. For example, the LastPass extension fills in passwords on websites and puts the icon in the toolbar to look up passwords. The Acrobat extension puts the icon on the toolbar to convert web pages into PDFs. AdBlock Plus is the extension that blocks ads from appearing on websites. Pocket and OneNote have extensions to clip web pages for reading later. There are literally thousands of Chrome extensions. You can see what you’re running in Chrome by typing in chrome://extensions/.

Remember how computers would slow down ten years ago if you filled them up with little junk programs? Chrome is like that. It will start to use more memory and slow down if you go crazy with extensions.

Edge does not have that problem. Do you know why? It’s a trick question. Edge isn’t slowed down by extensions because Edge doesn’t support extensions.

Microsoft just began testing the first  support for extensions for Edge last month. And what an exciting day that was! Testers could install support for the “Reddit Enhancement Suite,” to “enhance the Reddit browsing experience.” There was a “mouse gestures” extension, to “let you perform basic browsing tasks, like scrolling or opening and closing tabs, with your mouse.” And there was an extension for Microsoft Translator to translate web pages into different languages – you know, like Google Translate has been able to do for years.

That was it. Seriously, that was the first reveal of eight months of work to improve this broken browser – an extension to open and close tabs with your mouse.

Of course, Microsoft says that LastPass, AdBlock Plus, Amazon, EverNote are working on bringing their extensions to Edge. But that actually reveals a huge problem. At one time, the hope among Microsoft watchers was that Edge would be able to run all of the extensions currently available for Chrome, making Edge instantly competitive with Chrome. It’s now obvious that extensions have to be rewritten by developers for Edge, and will only be available through the Windows Store – you know, the place you’re not using. Although top tier companies like LastPass and Amazon will write extensions for Edge, there will be no incentive for smaller developers to rewrite their extensions for Edge. Why would they? It’s Microsoft’s chicken and egg problem that led to the death of Windows Phone: No one is using Edge; no one will switch to it if there are no extensions; and developers won’t write extensions if no one is using Edge.

Missing features and lack of support for syncing

We have quickly become accustomed to having things follow us from device to device. Google uses your Google account to sync many things from Chrome on one computer to Chrome on other computers and to your Android phone.

When Edge was released, it could not even sync your Favorites from one computer to another. That was so glaring a flaw that it really drove home how badly Microsoft had dropped the ball with Edge. Microsoft is just now starting to support syncing of Favorites and History, but Edge still does not support syncing open tabs and other basic browser features.

There are more features missing from Edge. Edge cannot save groups of open pages in a folder in Favorites, or open groups of pages with a single click. The back button only goes back one page at a time, with no option to go back multiple steps by holding down the back button. Edge ignores touchscreens and does not support going back or forward through pages by swiping the screen. At the moment there is no way to pin tabs for quick access.

Microsoft promises that some (but not all) of those features are under development and will perhaps (but not definitely) be part of the Windows 10 Anniversary Update. If Microsoft carries through on all of its promises for Edge, it will still not do everything that Google Chrome does today.

The latest Edge announcement highlighted the problem. Microsoft announced yesterday that the July update will include support in Edge for WebM, a technology used to deliver online video. Can you guess which company developed WebM? Spoiler alert: Google. It’s the video format used by YouTube and many other sites. Okay, a bonus question: can you guess which browser already supports WebM and has for a long time? Shucks, you’re way ahead of me.

When you look at Microsoft’s web page promoting Edge, it calls attention to the features that set Edge apart. For example, Edge is integrated with Cortana for search results, which is at best mildly interesting. Cortana is another Microsoft project where the promise has so far wildly outstripped the reality. Another example: Edge has a nice Reading View for clearing ads off a page. 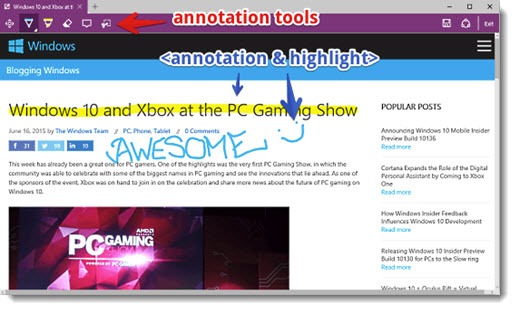 But Microsoft is most proud of Edge’s support for handwriting notes on a web page, then sharing the handwritten annotations with people. It looks like the above picture.

Sometimes I feel like a cranky old guy living in a different universe than the young whippersnappers.

Will anyone actually do this? Is this a thing? Am I missing something that makes this interesting?

Enough ranting. Microsoft Edge is a mess, another sign of Microsoft’s decline and lack of competitiveness as a software developer for individuals and small businesses.

If you have the Edge icon in your Windows 10 taskbar, make it go away. The instructions are here. Internet Explorer works well enough but consider switching to Google Chrome. (Firefox is a nice browser but it has its own development problems and is losing market share fast. Use it if it’s already your favorite but don’t choose it if you’re starting a new relationship.) And if you have a long memory, feel nostalgic for the days when Microsoft drove the industry forward and gave us our best toys.