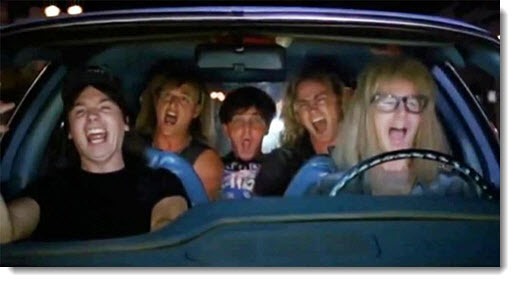 Remember the lyric in Bohemian Rhapsody? “Thunderbolt and lightning, very very frightening me!” It’s right before “Galileo, Galileo” and the part where everybody starts shaking their heads back and forth.

This article has nothing to do with Bohemian Rhapsody. I want to tell you what you need to know about Thunderbolt and Lightning ports on computers and phones.

Wow, that was fast! Almost everybody left the room. Hmm.

I’m not discouraged. I’m going to proceed with the lecture for the few of you who are left. 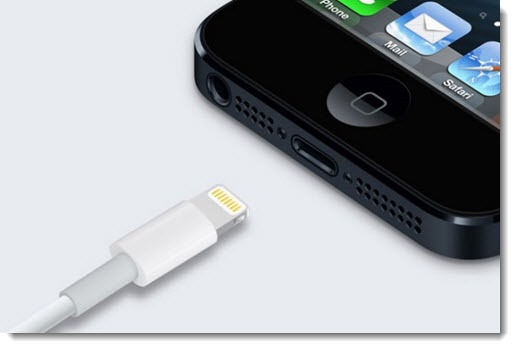 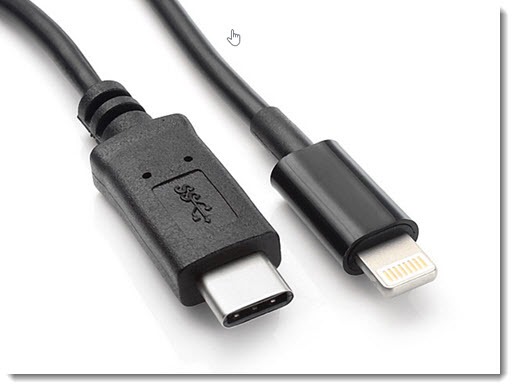 For comparison, the photo below shows the varieties of USB cables that you’re familiar with. We’re going to lump them together and call them all “USB.” You don’t want to know about USB Type-A (the connectors on the left in the picture below) and USB Type-B (on the right) and all the varieties of USB that co-exist today (USB 2.0 and 3.0 and 3.1). Just assume everything you’ve used up to now has been “USB.”

There are infinitely complicated details of how all the varieties of USB and USB-C have developed and what is supported by each variation. Here’s a reasonably clear explanation, if you’re interested. I’m going to gloss over all the details in the hope that a little bit of mildly inaccurate information is better than no information at all.

•  These are all just ways for devices to talk to each other.

•  As time goes on, each new generation is capable of doing more things and doing them faster than the previous generation. USB ports are a good way for a computer to talk to a printer or an external hard drive, for example. USB-C and Thunderbolt ports can talk to USB devices but can also handle video, audio, power charging and a whole lot more, all through the same cable at far higher speeds than USB.

•  The ports do the work – the part inside the computer or the phone or the device. You’ll have to use the right cable but that will only be part of the story. There is special stuff built into the devices to make the magic work. Chips inside the device or the computer define what goes through the USB-C and Thunderbolt cables.

•  There is literally no way to make your eyes focus on the information about what things will and won’t work. I just tried to write that up and started to doze off before I had finished more than a few sentences.

•  Lightning is a special Apple proprietary way of connecting to plain old USB. Apple created it partially to make iPhones and iPads thinner and partially to lock you into their proprietary gear. They kept the Lightning port for the new iPhone 7 models, but switched to Thunderbolt 3/USB-C for the brand new MacBook Pros introduced this week. You’ll actually need to buy an adapter cable to hook an iPhone to a new MacBook Pro.

•  In fact, making things work will require an alarming number of adapters and dongles to convert one kind of port to another. For example: Need to connect an iPhone to a computer? Here are Apple’s cables – Lightning to USB-C ($35) and Lightning to USB ($19). 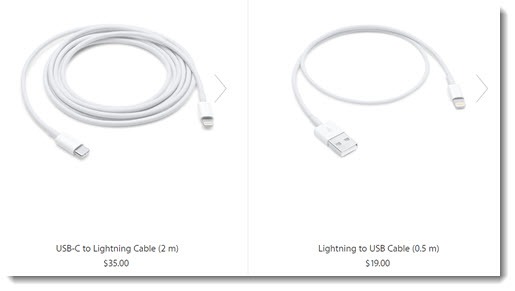 •  You would not believe how many adapters and dongles there are. You will have drawers full of them. A couple of years ago I wrote about the confusing world of video adapters – VGA, DVI, HDMI, and DisplayPort – and the various cables required to hook up a computer to a monitor. Many of you have had to puzzle out the right choice on Amazon – HDMI to DisplayPort, mini-DisplayPort to DVI, or who knows what. Now imagine that puzzle becoming far more difficult, with more choices and more ways to get it wrong when you discover that two things aren’t compatible.

•  Cable quality will start to matter for speed, charging, and video. Cheap cables might not work. We’re not used to that; almost any cheap USB cable will let you connect to a printer. You won’t like buying $30 cables but that might become necessary as we start using these ports to run our monitors or more complex devices.

•  We’re in a transition. USB-C will become the standard port on PCs, Macs, and phones. Eventually almost everything will use USB-C but during the transition you’ll have older devices to plug in and there will be much confusion and gnashing of teeth.

•  Thunderbolt is a proprietary add-on from Intel that is now fully compatible with USB-C. It’s incredibly fast and has some real advantages but no one knows if it will catch on and become the even-better-than-USB-C-industry-standard. Here’s an example of how things will get difficult. USB-C devices can plug into Thunderbolt 3 ports. But upcoming Thunderbolt 3 devices (a super-fast external hard drive, or a Thunderbolt 3 external graphics adapter, for example) will only work if they’re connected to a Thunderbolt 3 port on the other end. They won’t work in a USB-C port, even though the cable will fit.

USB-C cables can be plugged in either way – there’s no up or down like a USB cable. That might be their most important advantage. After years of always plugging in USB cables the wrong way the first time, the joy of knowing that USB-C cables are reversible will get us through the transition.

USB-C and Thunderbolt ports are starting to turn up on high-end laptops and will work their way down to more devices in the next couple of years. In the meantime, be prepared to accumulate a few dongles and to deal with some confusion while you’re trying to get devices to work together.