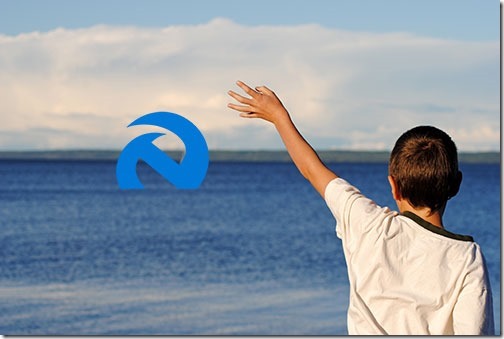 People spent more time browsing the web on their phones than on their PCs in October, according to StatCounter. Think about that for a second. It’s another remarkable statistic. More than half of the time spent online globally now happens on phones! What an extraordinary shift in a few years. PC Internet usage still slightly outweighs mobile usage in the U.S. and UK, but the same trends are happening here and it won’t take long for the lines to cross. The shift to mobile devices and away from computers continues at full speed.

Still, there are a lot of PCs in the world and a lot of battles to be fought on them. Google, Microsoft, and Firefox are battling to control your choice of web browser – and in an unexpected development, Microsoft is badly losing the battle of the browsers.

When it released Windows 10, Microsoft replaced Internet Explorer with Edge, a completely rewritten Internet browser, in the belief that a fresh start would help it compete against fierce competition from Google Chrome. Unfortunately, the Microsoft Edge browser was unfinished and unappealing when it was first released, so it made a poor first impression on Windows 10 users. Edge was only one of a series of poor decisions by Microsoft that blunted enthusiasm for Windows 10 but arguably it did the most damage at a time when Microsoft needed Windows 10 to be perceived as an unambiguous winner.

It’s more than a year later, and Microsoft has steadily been improving the Edge browser. After all this time, I’m perplexed to tell you that the Edge browser is . . . unfinished and unappealing.

Perhaps that’s why nobody is using Edge.

Edge was clinging to only 5.21% of the browser market on computers in November, according to NetMarketShare, a decline from the previous month. That’s bad. But it’s worse than that. Another report estimates that Edge and Internet Explorer will have collectively lost a staggering 331 million users in 2016, meaning it’s not just Edge – it’s Microsoft that is being rejected. Microsoft’s browser decline started some time ago but accelerated dramatically in the last six months. Chrome and Firefox have both benefited from Microsoft’s fade.

Edge is missing many basic browser features. A year ago I wrote about some of the UI and navigational issues that kept me from recommending it then. Many of those are still not changed or fixed. But the most glaring problem is one that Microsoft may not be able to fix.

Modern browsers support extensions that allow the browsers to run programs. Google Chrome has tens of thousands of extensions and an eager community of developers working on more. You may be familiar with the LastPass extension for memorizing passwords and filling in login prompts. Acrobat has an extension for converting web pages to PDFs with a single click. Ad blockers, web clippers, oh so many more – you probably have your own favorites.

When Edge was released, it did not support extensions. That was unforgivable but Microsoft said it would update Edge promptly to add support for extensions.

It took a year. Microsoft finally updated Edge to support extensions a few months ago. But there was a problem: developers have to rewrite their extensions to run in Edge and almost none of them have done that. That leaves Microsoft with a chicken and egg problem: since no one is using Edge, developers aren’t working on extensions for Edge; since Edge isn’t very well supported, users don’t have any incentive to start using Edge. It’s exactly the same calculus that led to the death of Windows Phone. Today there are almost no Edge extensions and there is no reason to believe Edge will gain any momentum with developers. 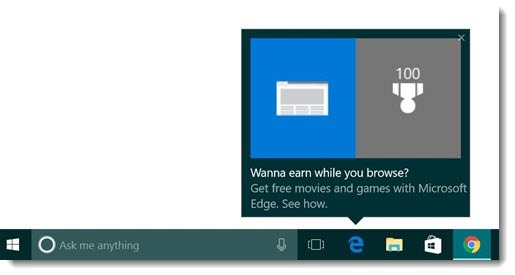 That’s the background to help you understand why ads are popping up on your screen for Edge. Remember the overly aggressive and obnoxious popups for Windows 10 upgrades? The same contingent at Microsoft now thinks it’s a good idea to pop up a notification about Edge when you use another browser. A notification might appear about how swell Edge is with power management. Or a popup might come from the Edge icon on the taskbar offering to pay you through the Microsoft Rewards program if you use Edge. Seriously, Microsoft is trying to bribe people into using its unloved browser. (Don’t get excited. It’s a terrible bribe in the small print.)

Microsoft’s woes are not limited to Edge. As might have been expected, Windows 10 flatlined when Microsoft ended the free upgrade offer in July. Windows 10 has about a 22% market share and seems to be stuck there. Computer sales are dropping. There was no sales bump this fall from back to school shopping. Windows 7 market share – more than twice that of Windows 10 – has not dropped at all in the last few months. That’s strange and ominous, since new computers are now shipping with Windows 10, which should lead to a natural steady rise in Windows 10 market share.