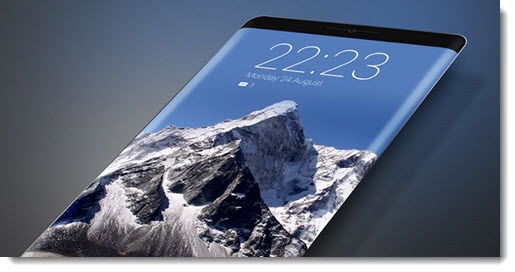 Previously:
The Latest Smartphone Trends
New Premium Phones: Apple iPhone X, iPhone 8 & 8 Plus
With the announcement of the upcoming iPhone X, Apple opened the door to phones that cost a thousand dollars or more. Samsung and Google have each increased prices on the new models of their premium phones, hoping to capture profits like Apple from customers who are not particularly sensitive to price but will pay for better (and more expensive) screens, extra features, and the cachet that comes from carrying the latest and greatest.

That last one – the idea that carrying a the Samsung or Google phone increases the status of customers – is mostly imaginary. The name “Samsung” does not cause anyone’s heart to flutter. But that’s hard for the manufacturers to accept, so Apple envy makes Samsung and Google believe they can get away with the same pricing tactics as Apple.

Here are some quick notes about the Samsung Galaxy S8, Galaxy S8+, and Galaxy Note 8, and the Google Pixel 2 and Pixel 2 XL. 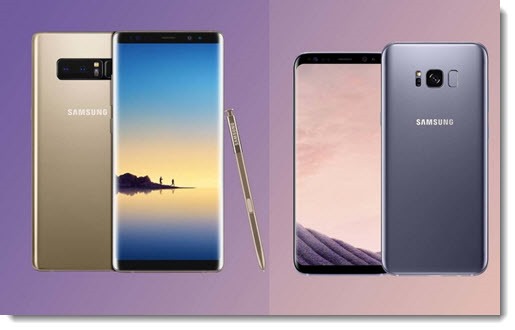 Samsung has three premium phones in 2017 with very similar designs, all featuring the same slender top and bottom bezels and curved side-to-side “Infinity Display.” They are, simply, beautiful. They’re radiant. Everything else looks stodgy and dated by comparison.

Having said that, there are some reasons you might not want one. I’m not going to get one. But damn, those are some good looking phones.

The cheapest Samsung Galaxy S8 starts at $725. The larger Galaxy S8+ starts at $825, and the Galaxy Note 8 starts at $930. Unlike Apple, there is some price discounting on Samsung phones after they’ve been on the market for a while, but you get the idea – these are expensive phones.

The Galaxy S8+ and Galaxy Note 8 are virtually identical. The Note 8 includes a stylus. That’s about it for the hundred dollar difference in price.

Performance is solid, the cameras are excellent. These are great phones that would make you happy. I don’t want to sound too negative so assume I’ve said lots of nice things about how swell they are.

With that in mind, there are two things that aren’t quite right.

Remember that each manufacturer has to decide where to put basic phone controls if the entire face is devoted to the display. Apple decided to eliminate the home button completely on the iPhone X and rely on facial recognition and new, unintuitive gestures for switching apps and getting to the home screen. Android has onscreen buttons for some of the basic tasks, so Samsung only needed a place for the fingerprint reader.

For reasons that no one can understand, the fingerprint reader is on the back at the top, where it’s difficult for your finger to reach. And it’s right next to the camera lens, which you will almost certainly smear when you’re trying to unlock the phone.

There are reports that Samsung hoped to build the fingerprint sensor into the front screen, as Apple hoped to do with the iPhone X, and was forced to make a last minute compromise. It’s a frustrating compromise.

Samsung’s second problem with the Galaxy phones comes from its deep-seated Apple envy. Although Samsung sells far more phones overall, its premium phone sales lag far behind iPhone sales. Apple’s customers are fiercely loyal; no one has an emotional bond to Samsung. Apple controls its operating system and makes huge profits from its proprietary app store. Samsung acts like it is slightly resentful that it has to rely on Android and share an OS with all the other manufacturers.

So Samsung tries to play in the same league by developing its own apps and its own unique features to overlay on top of basic Android. It’s not very good at it. Samsung phones come with multiple apps that all too often are intrusive and annoying, and are frequently duplicative of native Android apps. The phones are cluttered and confusing.

Then there’s Bixby. The Galaxy S8 and Note 8 devote a button on the side to Bixby, Samsung’s pale alternative to Siri for controlling the phone by voice. Bixby was launched late and works poorly. No one was asking for it and now that it’s here, no one wants to use it. Engadget: “After living with Bixby on the Galaxy S8 for a week, I couldn’t wait to kick it to the curb.” Ars Technica: “Like most of Samsung’s Android pack-in apps, Bixby is a duplicated service that is chasing an existing Google offering. Also like most of Samsung’s software offerings, it’s a half-baked solution that doesn’t work very well.”

You may see a lot of people with Samsung’s new premium phones, but the chances are you will not hear people saying, “Hi, Bixby,” very often. This week Samsung finally caved to pressure and made it possible to disable the dedicated Bixby button, making it harder to activate the unwanted helper by accident.

The Samsung Galaxy summary: Gorgeous phones, expensive but not out of line in the heated 2017 premium phone market. The Galaxy 8+ is so similar to the Note 8 that only diehard stylus users will want to spend the extra hundred dollars. You’ll deal with a clumsily placed fingerprint reader and Samsung’s usual array of poor apps. Those aren’t terrible problems! These are top-shelf phones that will make you happy and proud. 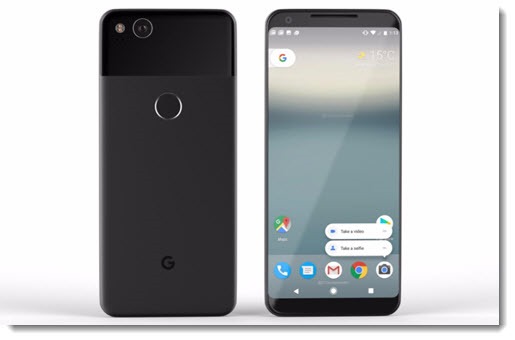 Specs and pricing were leaked last week. There is still the possibility of a surprise or two but chances are we know most of the important details. What we know is that the Pixel phones are nothing special. They’re just elegant and simple and reflect smart choices throughout and are built with the best components and screens. That’s what makes them stand out. I’m going to get one.

The top and bottom bezels are very thin and the side of the screen has a slight curve but they’re not as striking as the Samsung screens. The cases look just like most other phones.

The operating system is Android – just Android, with no extra apps, no extraneous buttons.

The camera is very high quality. Cameras on the current Pixel phones were arguably the best cameras on any phone, testing slightly better than the iPhone 7 cameras. Presumably the new models will vie with Apple and Samsung for top honors.

And like Apple and Samsung, it’s likely that the Pixel 2 and Pixel XL 2 will be priced sky high. The smaller, less interesting Pixel 2, made by HTC and a bit bland, will start at $649. The larger Pixel, made by LG, will reportedly be $849 for the 64Gb version and $949 for the 128Gb version. (I saw one report that Google was still debating prices internally so it’s possible it will back down slightly.)

Apparently Google believes its phones deserve to be in the same rarefied air as the best Apple and Samsung phones. Google hasn’t really earned its place there. No one associates Google with the very best quality hardware. Most people don’t even know Google makes phones. Unless Google is planning to do some amazingly effective marketing, the price for these phones is hard to justify.

Yet there is something appealing about a phone that is pure Android without extraneous crud. Google will make sure that its phones get security updates promptly, when other Android phones are at the mercy of the carriers and frequently have updates delayed or never delivered at all. The phones will provide easy access to Google Assistant, possibly by a squeeze to the sides of the phone – far more useful than a button that calls up Samsung’s unwanted Bixby. The camera will be best of class and Google will include unlimited storage of full resolution pictures in Google Photos.

Google continues to flirt with being a phone carrier with Project Fi, its service built on wi-fi and the Sprint/T-Mobile networks. Project Fi features simplified pricing, generous terms, and is particularly good for international travel. At the moment you can only sign up for Project Fi if you use one of Google’s phones. The Pixel 2 and Pixel 2 XL will be able to be used with other carriers but they will be required if you want to be a Project Fi customer. (Later this year Project Fi will be available with the lower-priced Moto X4 and perhaps one or two other phones.)

The Google Pixel 2 summary: Simple and a bit bland, and expensive to boot. And yet there is something appealing about a pure Android experience matched with best of class components, a high quality OLED screen, and no obvious wrong choices. If you’re deeply invested in Google’s ecosystem, or if you want the security that comes from prompt Android updates, the Pixel 2 XL looks very strong.

I feel myself sliding inexorably into Google’s world. Apple’s attempts to retain control of my experiences with the iPhone are starting to irritate me instead of making me appreciate Apple. Siri is pretty useless for anything more than timers; I’m starting to lean more heavily on Google Assistant and I want easier access to it. When I click on an address, I want Google Maps to open. I want Chrome to handle all my web browsing so I can view my history and open tabs on all my devices. I don’t have confidence in iCloud and I’m ready to stop paying $1.99/month for iCloud storage space. I’ll never use Apple Music. I’ve never liked Apple’s whack-a-mole wall of icons.

Android has become more polished since I last had an Android phone. I’m ready to find out what that’s like.

Barring any surprises, I’m going to buy a Google Pixel 2 XL in a few weeks and move to Project Fi. Perhaps I’ll miss my iPhone. Maybe I’ll be nostalgic for Verizon and AT&T. But for now the Google Pixel 2 XL looks . . . well, it looks perfect.