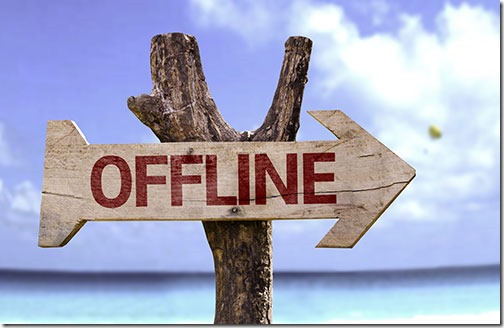 (This tip is for IT pros. Non-technical readers should still read this article because it involves a thrilling mystery, it teaches important lessons for healthy living, and it has a fresh minty aftertaste. But if you’re not sure, don’t do anything to your computer without the support of your trusted IT support person.)

Outlook 2013 and 2016 can occasionally lose their connection to an Office 365 hosted Exchange mailbox. I’ve dealt with it several times in the last year or so, mostly in the last few months. The specific problem that I’m describing happens this way:

•  Nothing has changed on the computer.

•  The mailbox is still functioning. Office 365 webmail is fine. Phones are still sending and receiving mail.

If you’re in that position, try disabling IPv6 on the network adapter handling the Internet connection. Go to Network And Sharing Center / Change adapter settings, right-click on the adapter and click on Properties, and uncheck the box by Internet Protocol version 6 (TCP/IPv6). Click OK to close everything, then restart the computer. If you’re lucky, Outlook will immediately connect. You fixed it!

Okay, there might be a couple of questions that come to mind.

As far as I can tell, some computers stop being able to resolve the IPv6 DNS address for outlook.office365.com. When that happens, Outlook cannot connect to the Office 365 servers. It’s limited to the Microsoft Office 365 servers; other IPv6 DNS name resolution works fine.

It’s random. It happens to computers that have been happily connecting to Office 365 for weeks or months or years. It can start in the middle of the day while the computer is logged in, or it can start after the computer wakes up or is rebooted. Restarting the computer doesn’t help. The chances are it will resolve itself eventually but that might be anywhere from an hour to a day to never.

Try pinging outlook.office365.com on a computer where Outlook is disconnected. If you get back IPv6 addresses, then you might fix the problem by disabling IPv6. 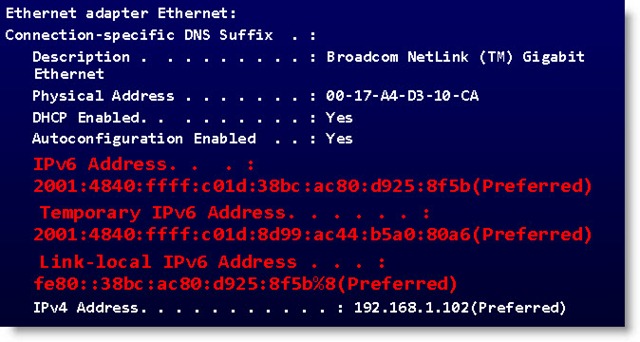 There are two Internet Protocols used to carry information around the Internet. The original address system, IPv4, is still in widespread use, and it’s used almost exclusively in the United States. Its successor, IPv6, has important technical advantages and it will have a large impact on modern networking when it is fully implemented. It will require such a disruptive shift at all levels that everyone affected has been procrastinating and making loud LA LA LA noises for quite a long time.

The result is that you will likely not notice any difference whatsoever if you disable IPv6 today on a Windows computer in the United States.

I wrote two articles to prepare everyone for the IPv6 revolution: First Rumbling Of The Coming IPv6 Transition and IPv6 And Really Large Numbers. Honest, they’re really interesting. You’ll like them. Here’s what I had to say about procrastination:

“The problem is, IPv6 is not particularly compatible with IPv4. Traffic running on IPv6 equipment is invisible to IPv4 equipment in almost every way. The committee made a decision not to pursue backward compatibility, which probably made a lot of technical issues easier but leaves us with difficult problems now that we’ve procrastinated and there’s no time to ease into things. It’s going to take equipment changes up and down the line, from the largest ISPs and global routers down to your office, before we will be able to deal with IPv4 and IPv6 traffic at the same time.”

Today IPv4 and IPv6 traffic is running at the same time on our networks but almost nothing actually uses IPv6 for anything important. ISPs, web hosts, businesses, equipment manufacturers – all of them continue to rely almost exclusively on IPv4 to run everything that matters.

The lesson is, never underestimate our collective ability to procrastinate. I wrote those articles seven years ago about something that I thought would be well under way by this time. The switch to IPv6 will happen . . . eventually.

Is this a good idea?

Absolutely not. Microsoft vigorously defends IPv6 and wags its finger at anyone who disables it:

“From Microsoft’s perspective, IPv6 is a mandatory part of the Windows operating system and it is enabled and included in standard Windows service and application testing during the operating system development process. Because Windows was designed specifically with IPv6 present, Microsoft does not perform any testing to determine the effects of disabling IPv6. If IPv6 is disabled on Windows 7, Windows Vista, Windows Server 2008 R2, or Windows Server 2008, or later versions, some components will not function. Moreover, applications that you might not think are using IPv6—such as Remote Assistance, HomeGroup, DirectAccess, and Windows Mail—could be.”

IT pros strongly advise leaving it enabled – “If IPv6 causes a problem, then fix the underlying infrastructure, you ignorant git.” There’s usually something in those articles about “disgrace to the profession.”

And it’s worth repeating: IPv6 deployment is much further along outside the US and disabling it in other parts of the world could break all kinds of things.

In the US, though, I have never seen any side effects from disabling IPv6 for individuals or small businesses.

And there’s one more clue that Microsoft knows that disabling IPv6 is the best, and perhaps the only, workaround for this particular Outlook problem. If you run the Microsoft Support and Recovery Assistant for Office 365 on the disconnected computer, you may wind up at this screen, as I did last week. 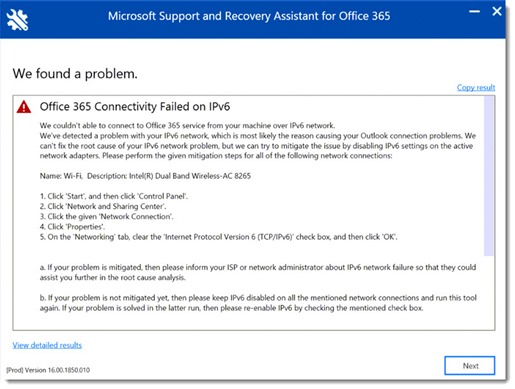 Per Microsoft’s troubleshooting tool: “We can try to mitigate the issue by disabling IPv6 settings on the active network adapters.”