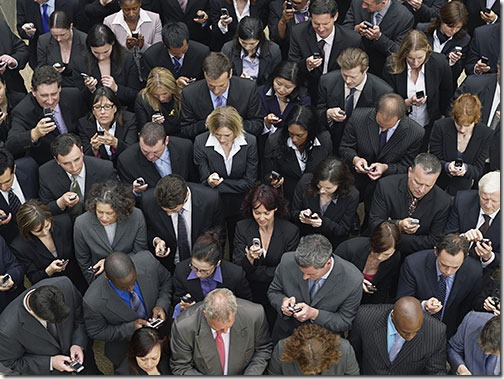 Ten years ago Apple introduced the iPhone and changed our world. Today more than three-quarters of all adults in the US carry a powerful computer – a smartphone – around with them at all times.

Phone manufacturers introduce new phones each fall. There are a few common themes this year that are worth pointing out as an overview of the industry in 2017. Then in the next article I’ll give you some specific thoughts about the latest premium phones (and why I’m probably switching from an iPhone to an Android phone).

Desktop computing has been declining for several years. Businesses and creative professionals will use computers for many years but the numbers are shrinking inexorably.

A recent study by Adobe Analytics measured web traffic since January 2015. The volume of traffic declined precipitously on desktop & laptop computers and tablets, down 30%.

But in the same period, over the last 30 months, smartphone web traffic increased by 68%.

The same study shows that we are using fewer apps on our phones; the number of apps we open and the time we spend using them is steadily declining. (With three exceptions: usage of apps by Amazon, Google, and Facebook is growing just as steadily.)

Advertisers are rapidly adjusting to a world where Google and Facebook are responsible for more than three-quarters of all referrals to company websites (when people don’t go directly to a page but find it by a search or by starting in an app).

If you want the best phone, be prepared to pay anywhere from $700 to $1000 or more for the privilege of having the latest and greatest.

Apple has become the richest company in history by selling a comparatively small number of devices with high profit margins to well-heeled consumers. (Remember: Android runs 90% of the phones that are sold worldwide; Apple collects 90% of the global profits from selling phones.) Apple’s new iPhone X is the first phone to have a starting price of a thousand dollars, but Samsung is jealous of Apple’s profits and has priced its latest models almost as aggressively. A striking new phone from Andy Rubin (creator of Android), the Essential Phone, starts at $700. Google’s Pixel phones are in the same range. 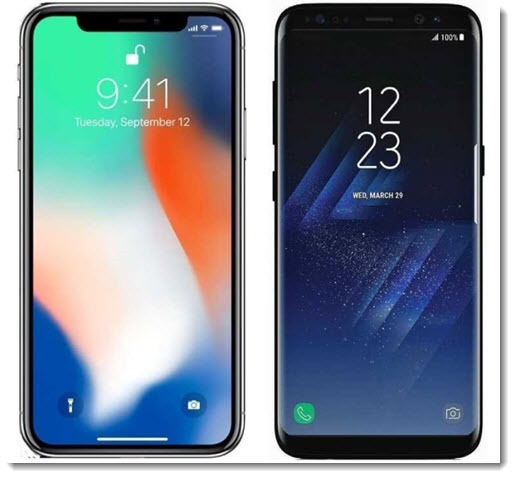 You can see the same design aesthetic in many premium laptops. Dell started the trend with the nearly invisible bezels on its XPS 13 laptop. Lenovo reduced the bezels on the Thinkpad X1 Carbon and Yoga to fit a 14” screen into a 13” laptop body. The striking look of the HP Spectre X360 starts with its edge-to-edge display.

The advantage of a bezel-less design on a phone is obvious: the body of the phone is physically smaller and easier to hold, with the same amount of visible screen as a much larger phone. Filling the front of the phone with the display requires moving some controls, though, and each manufacturer is dealing with that in a different way, as we’ll see.

Phones with bezel-less displays tend to all look alike. They’re all glass on the front, glass or metal on the back, and not much chance for manufacturers to make something that is obviously distinctive. That’s a particular problem for Apple, which counts on users feeling a bit special when they have an iPhone – harder to accomplish if no one can tell. It puts more pressure on each manufacturer to combine premium phones with compelling services that lock users into an ecosystem.

Picture quality on smartphones is amazingly high and getting better each year. Apple arguably took a baby step backwards with the cameras on the iPhone 7 and 7 Plus compared to the 6S and 6S Plus, but promises to improve the camera hardware this year combined with software processing for automated lighting and focus effects.

Android manufacturers are not standing still. The best Android phone cameras are just as good as iPhone cameras now. Photo enthusiasts debate endlessly, of course, but it’s surprising that there’s a bit of a consensus that the camera on the Google Pixel takes slightly better photos overall than iPhones.

The good news is that the cameras in less expensive phones are also improving. You don’t need to get the most expensive phone on the market to take good photos.

Phones need to be replaced

Phones age the same way that computers do. It’s pretty typical after two years for phones to slow down, even if nothing changes in the way you use them. Expect battery life to start to drop, too.

Don’t panic. It’s not like your phone will stop working on its two year anniversary. But once you notice that it’s not as snappy as it used to be, start to save for the replacement, because it’s never going to get better.

Next: a few general comments about new phones from Apple, Samsung and Google