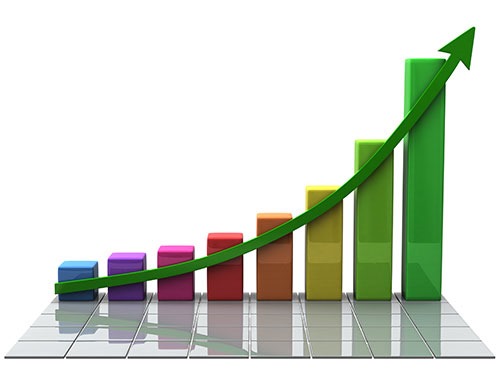 If you’re an individual or small business Windows user, you might have the wrong idea about how Microsoft is doing.

We all tend to generalize from our own experiences. You can be forgiven for thinking that Microsoft’s future is dim when Outlook has just crashed or you’re paralyzed by an unexpected and unwelcome Windows update. Microsoft seems to be the stodgy dinosaur in the Big Five – Apple, Google, Amazon, Facebook, and Microsoft.

The big picture is quite different. When Satya Nadella assumed the post of CEO in January 2014, he started to pivot the entire company toward cloud computing services aimed at large enterprises. The company had already begun to invest in those services but Nadella brought a clear-headed approach that allows Microsoft to thrive in a world that is moving away from Windows computing and the Office programs.

Here’s a picture of Microsoft’s stock price from 2013 to the present.

(Disclaimer: I’m not an investor. I barely understand investing. This isn’t investment advice.)

Microsoft share prices are up 35% in 2017 alone, and have doubled since Nadella became CEO four years ago. It’s an amazing transformation that goes far beyond exuberant stock prices. It reflects a change in the company’s direction that is as significant as its transformation into an Internet-focused company in 1996.

With the benefit of hindsight, let’s take a look at Microsoft’s position in 2014 (and today).

WINDOWS  In 2014 PCs had already started their long-term decline – not just in sales but also in their importance in our everyday lives. Windows was then, and continues to be, the most-used computer operating system for individuals and businesses worldwide, but phones have become the primary technology device used by individuals, and Chromebooks are starting to nibble inexorably at Windows’ market share. The effect is most easily seen in Windows 10 market share after a year of free upgrades and heavy promotion. Upgrades happened at a far slower rate than Microsoft hoped and predicted and sales of new computers are down each year. Microsoft is extending the life of Windows with every tool at its disposal and Windows will still be a successful revenue generator for a long time to come but it will never again drive the growth of the company.

OFFICE  The Office programs are facing a similar fate. The Office file formats (.DOCX, .XLSX, etc.) have a powerful hold on global businesses but people under 40 do not have the loyalty that will keep them on top forever. New businesses are perfectly comfortable with Google’s online applications. Kids are coming out of schools clutching their Chromebooks with no exposure to the Office programs. Satya Nadella recognized immediately that the best way to extend the lifespan of the Office programs was to make them available on every platform in the universe; one of the first press conferences under his watch was the introduction of Office apps on the iPad, followed by extension of Office apps to Android, iPhones, and the web. Like Windows, however, this is an extension of the lives of products that will inevitably decline in importance.

MOBILE  Satya Nadella understood instinctively that Microsoft had missed its opportunity to have a meaningful place in the world of mobile devices. He eventually wrote off the purchase of Nokia as an expensive mistake.

Microsoft has had to deal with the deep consequences of not having a mobile device in your pocket. Apple and Google are both trying to move into home devices – home assistants, lights, thermostats, speakers – that will appeal to you in part because they work so well with your phone. Apple, Google, and Amazon can all leverage your engagement with their ecosystems to sell more services and connected devices. Microsoft is halfheartedly trying to make you think of the Cortana assistant in the same way but has little chance of succeeding. We are too focused on our phones.

To put it in the simplest terms: When it missed the mobile market, Microsoft was left in a position where it cannot count on growth from anything marketed to individuals.

HARDWARE  Microsoft is selling a fair number of Surface devices, which are sold as premium devices and hopefully have good profit margins. It’s a decent business but also a competitive one, as the other computer manufacturers come up with more appealing laptops at the same premium price points. I wouldn’t bet on Microsoft staying in the hardware business in the long run. Although it generates a reasonable amount of revenue, it is not driving Microsoft forward.

Nadella took over the CEO position from Steve Ballmer, who had guided Microsoft expertly through antitrust investigations, market crashes, and ups and downs in Windows. Microsoft was perceived as a respected but aging leader whose best days were perhaps behind it. Microsoft stock price was effectively level for his entire tenure. Nadella came in and took important steps to reorganize product groups, heal relationships with competitors like Apple and Google, embrace open source technologies, and strike up partnerships with companies like Salesforce, Box, and Dropbox. Those are all important reasons that the company has rebounded. But Nadella’s most important contribution has been the acceptance of the inevitable fate of Windows and Office, and an understanding of the consequences of not being in the mobile market, which forecloses many other directions aimed at consumers.

Microsoft has pivoted to cloud services for enterprises. It has a chance to play a commanding role in a very profitable long-term area in which it has unique expertise. It is a pivot that is already paying off.

This chart shows the annualized revenue run rate in billions of dollars for Microsoft commercial cloud services over the last two years. 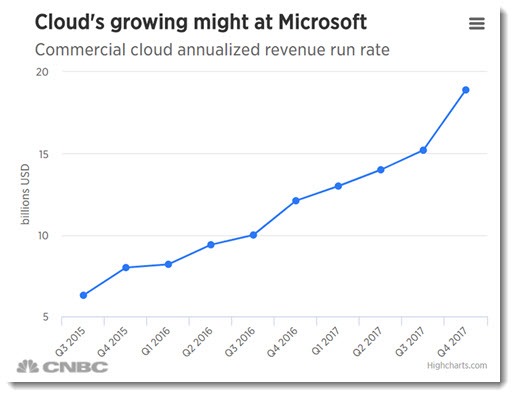 In the most recent quarter, Microsoft’s cloud computing business exceeded the company’s goal of $20 billion in annualized revenue.

The definition of “cloud computing” is a little fuzzy, but it’s more or less a combination of three things, all aimed primarily at medium and large businesses.

(1) Office 365 is a constantly growing aggregation of services that are successfully creating an ecosystem for businesses. Office 365 started with mailboxes but now includes a dizzying variety of services, from Dynamics 365, an enterprise planning and customer relationship platform, to Microsoft Teams, an office collaboration platform competing with Slack. The name “Office 365” is an umbrella term that covers security services, a multitude of communication and collaboration services, and a long list of other apps and services.

(2) Microsoft began offering Azure, its public cloud-computing platform, in 2010 to compete with Amazon Web Services. Nadella jammed the accelerator pedal down on Azure’s development. Azure is still in second place behind Amazon Web Services but it is successful and growing and there is room for both companies to succeed in that market. Azure is used by ninety percent of Fortune 500 companies to run worldwide networks and provide an endless variety of services. There’s no easy way to summarize what Azure and AWS are doing but it is fair to say that they are the engines running far more of your world than you realize.

(3) Microsoft is in a unique position with large enterprises, however, because those large businesses are already running Windows-based networks from their onsite servers. Microsoft is able to offer hybrid services that tie the existing onsite Windows networks to Azure resources. That gives big companies a crucial method to move their technology online at their own pace and under their control. Amazon Web Services is easy for brand new companies to set up, but more difficult for existing large companies to integrate with. That’s an opportunity for Microsoft. In Microsoft’s most recent earnings call, Nadella drew particular attention to Microsoft’s strength in hybrid connections between on-premise and cloud computing. It will be a critical driver of Microsoft’s growth going forward.

Nothing is assured for Microsoft. This pivot is in its early stages and Google and Amazon are not sitting still. Artificial intelligence will be a disruptive force soon; Microsoft has invested heavily in AI research and is starting to incorporate it into its Azure services, but it will have to execute nimbly to keep up in this fast-moving world.

For today, just don’t be too quick to think Microsoft is suffering when Windows crashes or Excel opens files slowly. Microsoft feels your pain but it’s a little distracted by bigger plans that lead it in a much different direction.