OneDrive Files On-Demand is a new feature being rolled out now to Windows 10 computers worldwide. It’s a valuable and welcome new feature that you should know about and that you might use. But this is from Microsoft, so you will not be surprised to find out that (1) it’s hard to predict when you’ll get the update that includes the new feature, (2) it’s confusing to set it up, and (3) it’s poorly documented.

Let’s dive in. It’s worth knowing about the concept even if you don’t use OneDrive. Some of the fun and interesting mysteries discussed below:

•  What is OneDrive Files On-Demand?

•  How do you turn on OneDrive Files On-Demand?

•  When will you get OneDrive Files On-Demand?

What is OneDrive Files On-Demand?

In the next couple of years, you will become comfortable with something new. Your files will be stored online but you will browse through them and open them using File Explorer on your computer, exactly like you do now with the files on your hard drive.

Anyone working in a business with a server already knows what that experience is like. The company files aren’t on your own computer, they’re on the server. Maybe you call it the P: drive, or maybe you’re familiar with UNC names like \\server\companydocs. You browse through the files and folders and click on a file to open it. You vaguely know that the file is on some other computer but that doesn’t matter.

The online services are starting to work the same way. When this is set up, you can browse through files just like you do now but you’re looking at a list of what’s online instead of looking through files that have been synced to your local hard drive.

The result is that you can store as many files online as you want without using any hard drive space. You can buy a laptop with a smaller solid state drive and still browse through your collection of 50,000 family photos.

Box was the first cloud storage company to introduce this feature to a broad audience when it made Box Drive widely available in June. Here’s an introduction to Box Drive and the idea of online files appearing in File Explorer.

Dropbox is starting to introduce Dropbox Smart Sync for its business users.

Microsoft has now built that feature into OneDrive and OneDrive For Business in Windows 10.

So again, to be clear: when OneDrive Files OnDemand is turned on, OneDrive appears in the left column of File Explorer, just as it does now. You can browse through the files and folders exactly like any other folders. But the files are not on your hard drive, they’re in the cloud. When you click on one, it is immediately and silently downloaded and opens completely normally. When you save a file, it is immediately and silently uploaded. There is no delay while files are synced. 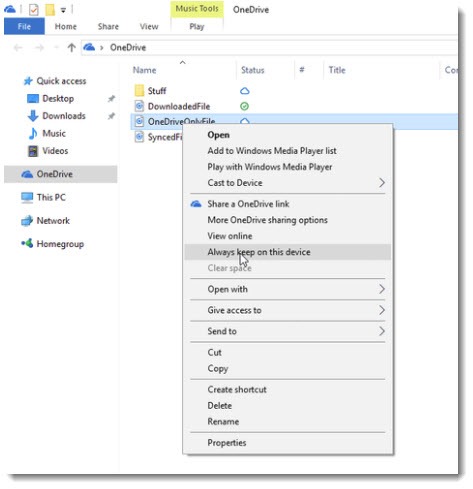 You have to be online to browse and open Files On-Demand. You might want to have folders available when you’re offline – getting on a plane, say. You can choose to have a folder synced to your hard drive so it’s always available when you’re offline. If you right-click on a folder, you can choose “Always keep on this device” and that folder will be downloaded and kept in sync. Other than a change in the little “status” icon, that won’t make any difference in the way you browse through files. When you get on the plane, though, you’ll be able to open those files but not the ones in the other folders. 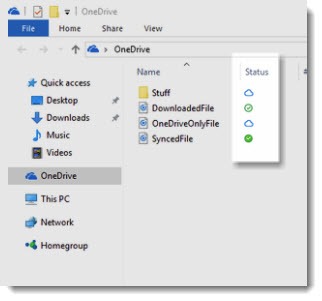 When you turn on OneDrive Files On Demand, a new “Status” column will appear in File Explorer. Files and folders will have one of three icons, shown above:

•  A cloud for files that are only stored online

There is nothing to learn about using OneDrive Files On-Demand (or Box Drive or Dropbox Smart Sync). That’s the point. It’s perfectly natural. There is, however, one side effect. You can search for file names but you cannot do a full text search through the contents of files from File Explorer. That tidbit is buried in the FAQ at the end of this Microsoft article. Box gets around that limitation by building a search box into its taskbar icon. Microsoft expects you go to the OneDrive website for full-text searches. I’m a power searcher and that’s a bit of a problem for me. Keep it in mind when you decide whether to turn this on.

How do you turn on OneDrive Files On-Demand?

OneDrive Files On-Demand is not turned on by default. Microsoft had a similar feature in Windows 8 and discovered that users were completely confounded by it, so you have to turn it on manually this time, which might reduce the confusion a bit.

If you’ve ever looked at the settings for OneDrive, you’ll discover that this new feature has been implemented in a way that seems completely backwards. Oh, Microsoft.

Right-click on the OneDrive icon in the taskbar and click on Settings.

If you have the updated version of OneDrive, there will be a new checkbox at the bottom for “Files on Demand.” (If you don’t have that checkbox, then you haven’t gotten the update yet. More on that below.)

Check the box and click OK. Done! Go back to the OneDrive folder on your computer and voila! You won’t see anything different. If you had folders online that weren’t synced, they still won’t be there. 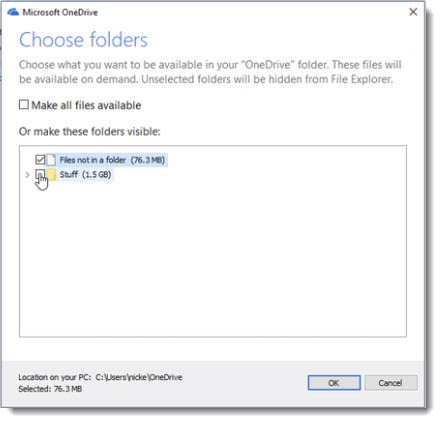 Go back to the OneDrive settings window and this time click on the Account tab, then the Choose folders button. In the past, this would have been where you chose the folders that would be downloaded to your computer. Now, though, it has morphed magically into the choice of whether folders are displayed in File Explorer without being downloaded. After you turn on Files On-Demand, you can safely check the box to “Make all files available.” You will NOT download everything from OneDrive to your computer. That’s handled now from the right-click menu on the folders, where you check or uncheck “Always keep on this computer.”

After you choose “Make all files available” and click OK, you can go back to File Explorer and all your online folders will be there.

When will you get OneDrive Files On-Demand?

Still with me? Liar. You stopped reading when we got to the little status icons. Well, here are the rollout details for the faithful few.

Microsoft just released a major update to Windows 10, the “Fall Creators Update.” It’s such a major release that I literally had no reason to call attention to it. There is nothing in it that affects normal non-tech business users. I don’t even have an easy way to tell you how to check for it. (Really want to know? Open Settings / System / About and scroll down to Windows specifications. The Fall Creators Update is version 1709.)

This is the second major update for Windows 10 in 2017. The Spring update was delayed for many, many people while Microsoft swatted bugs, so its installation happened at unpredictable times between April and August 2017.

The Fall Creators Update is going faster. Many people already have it. The installation is more likely to happen in the middle of the night as Microsoft smooths out install headaches, so you might not even have noticed that one update took longer than usual. But maybe you haven’t gotten it yet. Maybe you won’t get it until February 2018. It’s update roulette and you’re playing whether you want to or not.

But there’s a detail here that’s even more quintessentially Microsoft. Although OneDrive Files On-Demand is the most popular feature in the Fall Creators Update . . . it’s not actually included with the Fall Creators Update. It’s delivered as a separate update. Microsoft didn’t tell anyone that, of course, leading to a bunch of articles in the tech press explaining why some people had gotten the Fall Creators Update in the first few days after it was released but still didn’t have OneDrive Files On-Demand. That was a temporary problem and I expect you’ll get everything together. Just a bit of inside baseball explaining why people who follow Microsoft are prematurely grey.

Your best bet is to right-click the OneDrive icon and see if “Files On-Demand” is on the Settings tab. If not, put this out of your mind and check back in a month or so.

The concept is exciting. The timing is uncertain. The implementation is confusing. Oh, Microsoft!