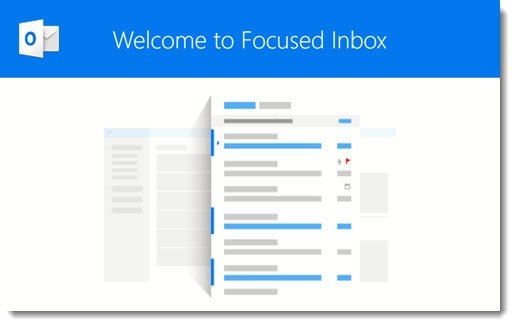 Imagine that every six months you came home and Microsoft had rearranged your furniture without telling you. There’s nothing wrong with the new arrangement and maybe it’s even a little better with the couch over there, but after a while you might wish that Microsoft would just leave the damn furniture alone.

That’s the way Microsoft has been handling Windows and the Office programs for the last few years.

Outlook is changing for Office 365 users. Focused Inbox is a replacement for Clutter.

•  Your important mail will appear in Focused Inbox.

You’ll be able to turn the Focused Inbox view off and on easily.

Clutter has been sorting mail in Outlook since 2015. The transition to Focused Inbox has been under way on different platforms for more than a year. When it is done, Focused Inbox will be consistent for Office 365 and Outlook.com mail users on all platforms – the Outlook desktop program on PCs and Macs, webmail for Office 365 and Outlook.com, and mobile Outlook apps on iOS and Android.

The differences between Clutter and Focused Inbox

Clutter and Focused Inbox both sort your mail into important messages and messages that can wait until later.

•  Clutter removes messages from the Inbox and sorts them into a separate folder.

When you find a mistake – an important message sent to Clutter/Other, say – both Clutter and Focused Inbox allow you to right-click on a message and send it to the correct place.

Theoretically Focused Inbox will have three advantages: it will be smarter about sorting your mail; it will do a better job of learning when you train it by moving messages; and it will be consistent everywhere – Outlook, webmail and mobile devices.

If you’ve been using Clutter, you might notice one alarming difference on phones.

•  Messages sorted into Clutter don’t show up on your phone without some effort to switch to the Clutter folder. Your Inbox on your phone only shows the important messages.

•  The built-in apps for mail on iPhones and Android phones don’t know about Focused Inbox, so when you turn on Focused Inbox, all of your messages will show up on your phone in the Inbox, including the unimportant ones.

You either have to live with that or start using Microsoft’s Outlook mobile app, which can toggle Focused Inbox on and off.

Important: This has nothing to do with Junk Mail. Meaningless crap will still go to Junk Mail, just like it does today.

How to turn Focused Inbox on and off

Outlook users can look under View. If your version of Outlook supports Focused Inbox, you’ll see the above button to turn it on and off. When it’s turned on, tabs for Focused Inbox and Other will appear at the top of the Inbox column, as shown above.

You will only see the Focused Inbox button if you are running a copy of Outlook obtained from an Office 365 subscription. It will not be coming to older versions of Outlook, or the non-subscription version of Outlook 2016. Microsoft has details about the rollout of Focused Inbox here.

When you turn on Focused Inbox, it turns off Clutter. The Clutter folder will still be there and messages in it won’t be disturbed until you delete them, but nothing new will be moved to Clutter. 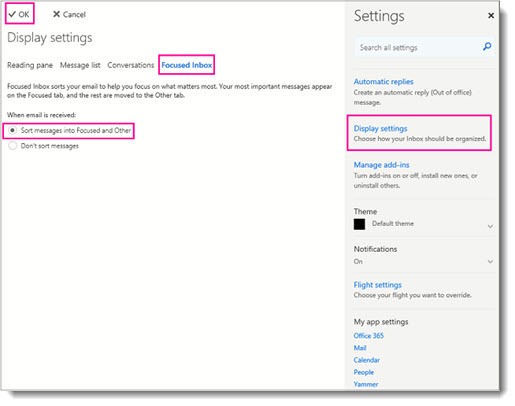 Why is Microsoft moving my couch? Er, changing something that was working just fine?

If I’m reading between the lines correctly, the feedback to Microsoft about Clutter was pretty brutal. A lot of people don’t like switching to a different folder to read some of their incoming mail. It wasn’t easy to design webmail and mobile mail apps to switch easily back and forth to the Clutter folder.

Microsoft acquired Accompli in late 2014, a small developer with well-regarded iOS and Android mail apps whose reputation had been built on “Focused Inbox.” It was such a good idea that Microsoft committed to building a better version of Focused Inbox and making it the long-term solution for sorting mail, even as it rolled out Clutter for what would turn out to be a short reign.

Clutter will still be supported in your Outlook desktop program until 2020, if you want to continue to use it.

Don’t panic. You don’t have to do anything today or tomorrow. You’ll see banners about Focused Inbox, especially in webmail, and you might want to give it a try when you’re ready to get used to something new. It’s not a big change and in the long run it should make things more consistent as we switch among devices. There’s a lot to be said for consistency.

Which is also why I sometimes wish Microsoft would just leave the damn furniture alone and quit changing things in programs that we use every day. Here we are with another change, trying to convince ourselves that the couch really looks better over there.