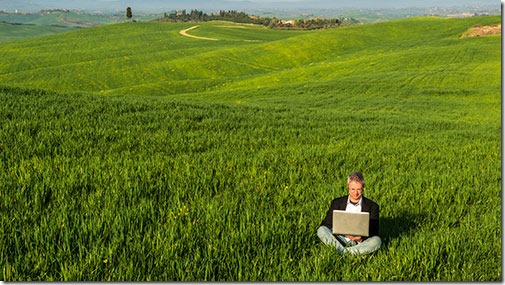 If you were paying attention during the previous lecture, you know that Microsoft is working with Qualcomm on “Always Connected PCs.” HP, Lenovo, Asus and other manufacturers will soon be selling laptops that are always on and always connected and offer long battery life. The laptops will run a special version of Windows for ARM processors, the same Qualcomm Snapdragon processors that are powering your phones.

And it’s true! Except for the times that it’s not true, because Microsoft cannot market anything without creating unnecessary confusion.

“Always Connected” means that the laptops will have built-in LTE modems that connect to cell phone carrier networks. You’ll have a data plan with, say, Verizon. Your laptop will be able to get an Internet connection from Verizon, or from wi-fi, or both, and switch seamlessly back and forth between them. It sounds terribly exotic until you remember that your phone has been able to do this for ten years.

If you’re a non-technical person, that’s all you need to know. Stop there. A laptop that connects to Verizon when you open it – cool! There’s some missing information about how much that will cost (see below) but the idea is great.

But keep reading (1) if you want to understand the technical details of what’s coming on the market, or (2) if you have a morbid desire to watch another Microsoft marketing train wreck.

Guess who sells the first one? Yup, it’s Microsoft – the Surface Pro With LTE “for an always-connected experience,” with a Qualcomm modem and an Intel Core i7 processor.

Intel also makes LTE modems. There will be “Always Connected” computers with Intel x86 processors and Intel modems and no Qualcomm parts at all.

And yet, this is the slide that Microsoft used at a Qualcomm presentation last month. 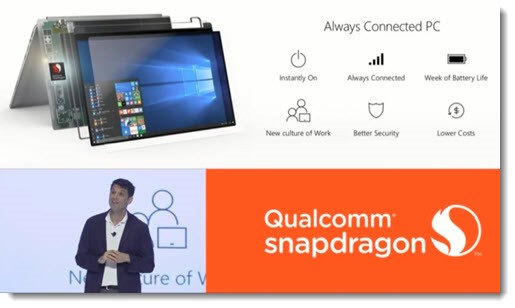 The marketing message for “Always Connected” computers will be hopelessly muddled. It might mean “Always On, Always Connected, Week of Battery Life, Qualcomm Snapdragon processor, Windows on ARM.” Microsoft’s presentation with Qualcomm last month sounds like the whole initiative revolves around the ARM processor.

But the exact same words might mean, “Always Connected, but Intel throughout, so your mileage might vary on battery life and coming out of hibernation.” Intel was at CES last week promoting all-Intel “always connected” laptops.

The result is that consumers seeing advertisements for Always Connected PCs will have literally no idea what they’re seeing or how to evaluate it. Admit it, you’ve just read two thousand words about it and you’re completely lost, right? And trust me, these articles are beacons of clarity compared to the muddle that will be created when ads start flying around.

How much will it cost to be Always Connected?

Windows laptops with LTE modems will support eSIMs, a new method of connecting a device to a phone carrier that does not require the tiny SIM card that you probably have inserted in your phone. You’ll be able to set up data for your Always Connected PC by buying a plan online instead of buying the laptop from Verizon or driving it to a Sprint store.

Verizon and Sprint are the two carriers who have committed to providing service for Always Connected PCs in the US so far.

Are you prepared for another bill from a carrier for the data for your laptop? Pricing is not yet available but your laptop data won’t be free. Carrier pricing will likely be as confusing for laptops as it is for phones but my guess is that laptop service will be roughly $10/gigabyte per month. Maybe it costs twenty or thirty bucks each month to have the convenience of being online all the time with your laptop, maybe more if you watch a couple of Netflix movies.

There have been tablets and laptops with LTE modems before. They haven’t made much of an impact because many people conclude that the benefit isn’t worth the extra monthly bill. I’m not sure it will be any different this time.

A postscript about Chromebooks

You can buy a Chromebook today that costs $250. It turns on instantly. It has amazing battery life.

If Microsoft appears to be gaining any momentum with Always Connected PCs, I expect Chromebook manufacturers to release Chromebooks with built-in LTE modems that are also “always connected.” Technically, it’s a piece of cake. Google built an LTE modem into the 2013 Chromebook Pixel but dropped it from the 2017 Pixelbook, probably due to lack of interest. Nonetheless, there are signs that more Chromebook models are being prepared for built-in LTE modems.

Microsoft, then, may be responsible for building consumer awareness of the advantages of being always connected. It might even build demand.

But the result may not change the market for Windows laptops. Consumers will be staring at a (virtual) shelf that has underpowered laptops running a stunted version of Windows – and next to them will be Chromebooks that have the same features at half the price.

I wish Microsoft well, as always, but there’s a good chance that this initiative will fizzle like so many Microsoft projects in the last few years. Oh, Microsoft!