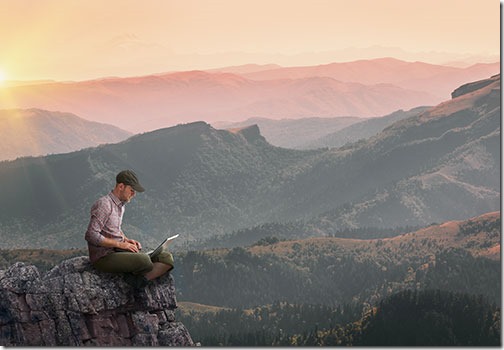 Imagine that you pull your laptop out and pop the lid open and start using it right away. There’s no delay, no swirling circle – it’s just on, bang, every time. You put your finger on the fingerprint reader and you’re logged in immediately.

Now imagine that the computer is always online with a working internet connection. Always. You don’t have to search for a guest wi-fi network or ask for a wi-fi security code or activate your phone’s hotspot. You’re just online, all the time, no matter where you are.

And finally, imagine that your battery lasts all day. In fact, the battery might last for several days unless you go on a Netflix binge for ten hours or something like it.

Here’s something that will make it easier to imagine what I’m describing: these are exactly the characteristics of your phone. You don’t have to wait for your phone to come out of hibernation when you pull it out of your pocket. It’s got an Internet connection all the time; you can connect to wi-fi if you like but it works the same either way. And with luck, you never think about your phone battery until you plug it in at the end of the day.

That’s never been our experience with computers. When you think about it, that’s kind of inexcusable, isn’t it? No wonder we pull out our phones instead of laptops when we have a free minute. Well, there’s the part where phones fit in our pockets, but stay focused: it would be nice if laptops were always on, always connected, and had better battery life.

Within the next couple of months you will begin to see a media blitz promising that Always Connected computers are real and available for purchase. “Always Connected” is a marketing term from Microsoft for a big effort intended to change our basic expectations about laptops – and perhaps invigorate sales and bring a little excitement to a declining platform.

Always on, always connected, long battery life – in a few years this might be routine, just our normal expectation for new laptops.

Between now and then, though, there will have to be compromises and transitions. This effort will only be successful if Microsoft and the computer manufacturers and the wireless carriers all behave themselves and act in our best interests and execute perfectly. In other words, there are so many potential failure points that I’m skeptical and worried.

This is a complicated story.

•   It starts with a fundamental change in laptops – at first, Always Connected PCs will be built with Qualcomm processors instead of Intel processors.

•   Switching to a different processor is only possible if Windows is rewritten, so I’ll tell you a little bit about “Windows 10 on ARM.”

•   Finally we’ll touch on the role that the carriers will play in whether this succeeds.

At the end, I’ll throw in a postscript that will make you say, Hmmmmm . . .

Qualcomm vs. Intel, Windows on ARM, and other techno-babble

iPhones and Android phones run on ARM processors. The ARM design is developed by a British company, ARM Holdings, and licensed to other companies. Qualcomm is the most important manufacturer of ARM-based processors. (Leave it at that. It’s true enough. Qualcomm has deep and complex relationships with Apple and Samsung and generalizations are a bit tricky.)

In a broad sense, x86 and ARM are very similar – just two different ways to make a processor that can run an operating system and control a device. Each has characteristics that makes one or the other better at certain things, as we’ll see. The important part is that they are different enough from each other that an operating system can’t be moved very easily from one to the other. Back in 2006/2007 Apple made a transition from an earlier type of chip (“PowerPC”) to Intel x86 processors, which required a significant rewrite of OS X. Apple made it look easy. It wasn’t.

For the last ten years, the world has been migrating to small mobile devices, almost exclusively powered by ARM processors. Intel has continued to improve the x86 processors that power Windows and Mac computers, but Intel completely failed at each attempt to move into the new mobile world. Its mobile processors never offered the right combination of features and never came close to matching the mobile strengths of ARM processors by Qualcomm and others. Intel also made a disastrous bet on the wrong 4G standard in 2009, and was left far behind Qualcomm when LTE became the worldwide standard for mobile data. Intel left the mobile processor market completely in 2016.

Qualcomm has built billions and billions of phone processors, many times more than all the Intel processors used by the entire PC market. We expect them to work all day, to be ready instantly when we reach for them, and to handle a variety of different types of networks automatically and invisibly. In the last couple of years, Qualcomm chips have also become so powerful that they might be able to power a Windows laptop.

That’s how we get to Windows 10 on ARM, Microsoft’s initiative to rewrite Windows so it runs on ARM processors.

In December 2016, Microsoft announced a partnership with Qualcomm to develop a version of Windows that would run on Qualcomm Snapdragon processors.

This is not the first time we’ve heard this from Microsoft. Windows RT was a special version of Windows 8 for ARM-based tablets released in 2012, a short-lived effort that failed miserably because the ARM processors at the time were underpowered and the ARM-compatible Windows RT could not run any x86 programs (all the things that you think of as “Windows programs”). 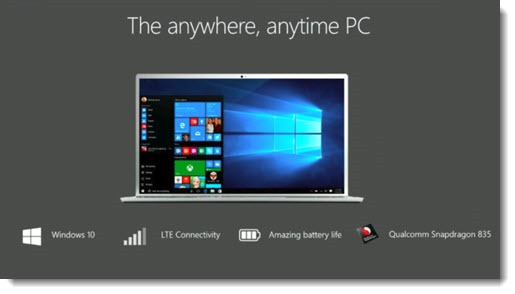 In 2018, Microsoft hopes it has addressed both those problems with Windows 10 on ARM. The latest Qualcomm Snapdragon processors are far more powerful than the ARM processors in 2012. The new version of Windows 10 on ARM will be able to run 32-bit x86 programs by using a tricky emulation layer. In theory you will not notice any difference in Windows if you get an Always Connected PC running Windows 10 on ARM. It will look like Windows 10 and it will run your familiar programs. (There are a couple of troubling details about that, discussed below.) But the Always Connected PC will never hibernate and will turn on instantly, plus notifications and alerts will be up to date because the computer is always connected. Qualcomm’s Snapdragon processors are designed to maximize battery life, so it’s reasonable to expect two or three or four times longer battery life from the new Always Connected PCs than most of today’s laptops.

What a bright future! What could possibly go wrong?

There are just a couple of niggling details.

Windows 10 S Microsoft insists that Always Connected PCs ship with Windows 10 S, the limited version of Windows 10 that cannot run any traditional Windows programs. You cannot install Google Chrome on Windows 10 S. The only browser is Microsoft Edge and the default search engine is required to be Bing. Windows 10 S does not meet any need that you have. Microsoft has a vision that it might help Microsoft with business goals that are important to it but not to you. Windows 10 S will fail. Pushing it out now is not just a bad choice; it verges on being customer hostile.

Windows 10 S can be upgraded to Windows 10 Pro. The upgrade process is easy and it’s free, at least for now. Still, your first experience with an Always Connected PC will be the frustration of figuring out that it comes with an unusable version of Windows.

32 bit limitation When you upgrade to Windows 10 Pro, it will be just like Windows 10 Pro on an Intel processor, except not really, because traditional Windows programs will be running on an emulator to fool them into thinking that there’s an Intel processor for them to use. We don’t know yet how well that will work. Apparently it will be limited to 32-bit programs, at a time when more programs are being rewritten as 64-bit programs for better performance on modern computers. At the moment that affects a fairly small number of programs but it represents a step back just when developers are stepping forward to 64-bit programs.

Performance Performance will likely be mediocre on the first Always Connected PCs. Qualcomm’s Snapdragon 835 processor is a powerhouse in a phone but will likely be anemic in a Windows laptop. The emulation layer may slow things down even more. The Office programs will be available in a version that Microsoft says is “optimized” for ARM processors, which might be a hint that performance in the emulated environment won’t be good enough to pass muster.

Reviewers have not gotten their hands on the new Always Connected PCs yet but early reports from journalists who spent a couple of minutes on demo machines have not been promising. It doesn’t make much sense to shave a few seconds off the startup time for a laptop if it’s slow to do everything else. The next generation of more powerful Snapdragon 845 processors is already designed but supplies will be constrained until Samsung has filled up this year’s Galaxy S9 phones.

Price A lightweight, always on PC with middling performance could still be a contender if the price was right. You’ll be weighing it against Chromebooks in the $250-$400 price range. Unfortunately the first announced Always Connected PCs are priced much higher, in the $600-$800 range. That’s too high.

I’m worried that the Always Connected PC concept will collapse before it has a chance to mature and work through some of these problems, just as Windows RT did back in 2012. Too many recent Microsoft initiatives have arrived half-baked in the last few years and disappeared after failing to generate any excitement in consumers, businesses, developers, or manufacturers.

SIgh. Is there anything else?

We haven’t talked yet about the “always connected” part of the Always Connected vision. In a surprise twist of Microsoft marketing speak, “Always Connected PCs” don’t have to be running on ARM processors. In the next article, I’ll try to sort that out and share my pessimism about any scheme that relies on the good will and loving business practices of the wireless carriers.