The battle between Amazon and Google in the market for home assistants will be the source of the most interesting technology advances in 2018.

You probably know the basics. Perhaps you have an Amazon Echo or Google Home in your kitchen already. You may not be aware, though, of how broad the vision is for these devices and how far Amazon and Google are prepared to take them.

Amazon Echo and Google Home are wi-fi speakers that respond to voice commands. You can use them to play music, answer questions, manage Smart Home devices, and perform everyday tasks. Most people start out by using them to set timers in the kitchen, to look up the weather, and to play Spotify. That’s actually not a bad start and a lot of people feel they get their money’s worth for just those few things. The question is whether home assistants will ever become anything more than that.

A lot of people in the technology industry think this will be the next category that grows to be a natural part of almost everyone’s life, just like personal computers in the 90s and phones in the last decade.

Let me suggest an analogy.

In the 90s, when the Internet was new and mysterious, I was frequently asked what it could do for non-technical people who weren’t aware that anything was missing from their lives. My answer was that each person would find one or two things that could be done online that was just perfect for them. In the early days, maybe it was weather, maybe it was maps, but almost everyone found something they felt was special that couldn’t have been done without a web browser. That hook was enough to draw people in, where they would find other things to hold them, eventually growing into the vast glorious online mess that we take for granted today.

After the introduction of the iPhone in 2007, the same question: what can the new “smart phones” do that matters to someone who was comfortable with a flip phone and an iPod? Again, there was always some app that would draw someone into the new mobile world, something that couldn’t be done as well on any other device. The novelty of apps has worn off now and many people have settled on a handful that meet their needs, but it’s a different collection of apps for each person and they almost always are best used on mobile devices – a platform that didn’t exist ten years ago.

Now it’s home assistants. You won’t know what to do with it at first. You’ll stare at the Google Home or Amazon Echo in the kitchen, trying to think of things to do. But if you keep it in mind, many (most) of you will find one or two things that it can do better than any other device in the home. Simple things – setting timers for cooking by speaking out loud when your hands are covered with food provides instant gratification. Maybe it’s the weather, maybe it’s music, maybe it’s recipes, maybe it’s turning the lights on and off – the point is, I can’t predict what will be the thing that draws you in. But I can predict that most of you will find something that turns them into regular accessories. Once you get started, Amazon and Google are working hard to find more useful things for them to do. Don’t be surprised if you wind up with Amazon Echo or Google Home devices in several rooms in the house.

If you haven’t bought an Amazon Echo or Google Home, then I highly recommend this article from PocketLint: What is Google Home, how does it work, and where can you buy it? It covers all the basics of what a Google Home is, and virtually everything it describes is similar for an Amazon Echo.

Amazon has released an extensive variety of Echo devices, with more on the way. You can get an Amazon Echo for your kitchen, but you can also get an Amazon Echo Spot to put next to your bed as your “smart alarm clock,” or an Amazon Echo Show to add video on a 9” screen, or an Amazon Echo Dot for $39.99 (less on sale), which is the perfect device for scattering around the house. Amazon believes “Alexa” has become such a familiar household word that it spent seven trillion dollars* (*estimate) to feature Jeff Bezos in a Superbowl ad.

Amazon is confident, with good reason. It got a substantial head start in the market for home assistants when it sold the first Echo in the United States in 2015, and it has developed partnerships with manufacturers in almost every conceivable related field to incorporate Alexa into skills for the Echo and into other devices for the home. Sales figures are hard to come by but it was recently estimated that Amazon Echo devices are outselling Google Home devices by three to one. 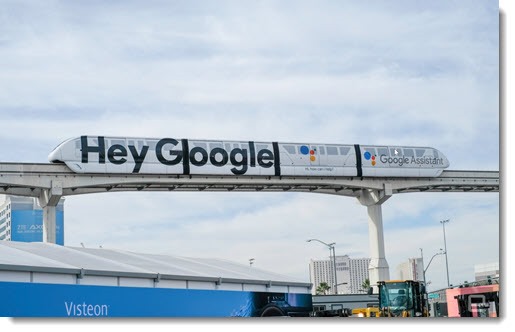 But Google is preparing to make this a war, and its secret weapon is Google Assistant, the voice-driven technology that is being built into Android phones as well as home assistants. Attendees at CES, the massive Las Vegas technology trade show, were greeted by “Hey Google” wrapped around the Las Vegas monorail, and an astounding array of ads, billboards, exhibits, pavilions, and announcements of products incorporating Google Assistant. This will be a pivotal year and Google has made it clear that it intends to fight hard with Amazon.

Google Assistant is the key to the Google devices. It is built into Google Pixel 2 phones and can be accessed with just a squeeze on the sides of the phone. Google Assistant will be prominent in new versions of Android and built into devices from a wide variety of manufacturers.

There is no right or wrong decision between Amazon and Google devices. Here are a few things to think about.

•  Google will always be better at answering general information questions – “How many students attend Tulane University?” Google’s AI research is improving its voice recognition quickly and Google has far more experience with the difficult problem of providing One True Answer to many questions.

•  Google simply knows more about you than Amazon and will leverage that information to make itself more useful to you over time. If you have an Android phone, Google likely knows where you are at all times. If you upload pictures to Google Photos, Google knows simply everything about your life. It intends to use its AI expertise to make intuitive leaps to make Google Home devices more useful. Amazon has a lot of data about your buying habits but it does not have the same breadth of information as Google.

•  At the moment, there is nothing else like Amazon’s Echo Spot, which is an amazing alarm clock.

•  These products are evolving rapidly. Here’s an example where Amazon has the edge today but perhaps not tomorrow: If you set multiple timers in the kitchen (“pasta timer for 8 minutes, vegetable timer for 14 minutes”), an Echo will say the name of the timer out loud when it goes off. Google Home will track multiple timers but you have to ask which one has gone off. It’s the kind of thing that Google could change any time.

•  Echos are, of course, perfect devices to take Amazon orders by voice: “Alexa, order some toilet paper.” There is a natural limit to that, though. It’s great for ordering products that you’ve already ordered before. Alexa: “You ordered Angel Soft toilet paper on January 4. Do you want to order it again?” “Yes.” “Okay, I’ve placed an order.” It shows up two days later. The experience of ordering something new, though, is quite different. Listening to a recited list of fourteen competing brands of toilet paper, all in different quantities, is pretty awful.

•  Both Amazon and Google are setting up their devices to handle phone calls. The capabilities of each are different right now but they are evolving quickly. Each has access to your contact lists (well, maybe) and we are at or near the time that you can say, “Alexa/Hey Google, call mom.”

•  If you have an Android phone, you are already halfway into Google’s world. You can expect natural interactions between your phone and a Google Home device, whether it’s using Chromecast to send audio to Google Home, or using Google Home to send a map to your phone.

•  If you want to make a baby step into home automation, buy Philips Hue lightbulbs. You’ll need to buy the Philips bridge device that’s required to get started. It’s reasonably easy to set up and surprisingly satisfying to say, “Alexa, turn on the living room lights.” (The Amazon Echo Plus can control Philips Hue bulbs without the need for the separate bridge.)

•  Experiment with a Google Home Mini or Amazon Echo Dot. They cost almost nothing, they sound kind of crappy but good enough, and you can get an idea of whether this is interesting to you.

At one time Microsoft thought it could develop Cortana into an assistant that could be bundled into home devices to compete with Amazon and Google. Cortana has generated almost no interest from Windows PC users and absolutely zero interest from manufacturers or consumers for other kinds of devices. Harmon Cardon dutifully fulfilled some contractual obligation and produced a Cortana device. All twelve of the purchasers were relatives of Microsoft employees who felt obliged to support the team. They only plug them in when the Microsoft employees are coming over for dinner. There won’t be any other Cortana devices.

And then there’s Apple.

Apple just began shipping the Apple HomePod, a stand-alone speaker that sounds quite good. Apple is very proud of its sound quality. Early testers are complimentary but not always overwhelmed.

The HomePod is not a home assistant. Siri will respond to some questions but (1) it is a stunted, incomplete version of Siri, and (2) Siri is just terrible at answering questions, as almost every iPhone user agrees.

The HomePod is a closed member of Apple’s ecosystem, to a level that is extreme even by Apple standards. It cannot connect to Spotify or any music service other than Apple Music. It cannot connect to any home automation devices unless they are built on Apple’s HomeKit, which is a nice home automation system but not very widespread compared to the competition. It cannot be set up without an iPhone. It does not play music over Bluetooth. There is no jack for audio in. Nilay Patel did a nice job for The Verge of praising the HomePod for its clear sound, and lamenting the extent to which it is hobbled by Siri’s weak performance and locked into Apple’s walled garden.

In 2018, Amazon and Google will be pushing home assistants to become more useful. Try one! This might be the Next Big Thing.