Around The World In 80 Taps: Google Pay, Apple Pay, And Contactless Payments 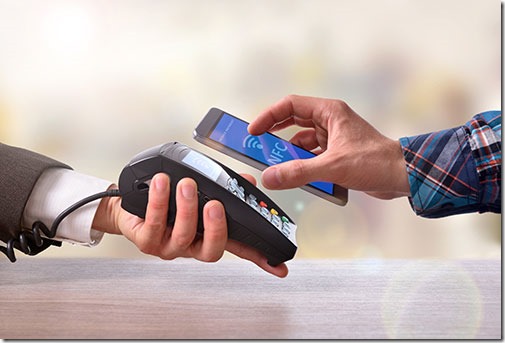 I never used a credit card in Australia. I bought coffee and sandwiches and souvenirs and dinners and clothing, but I never pulled out my wallet. I never used cash, either.

I’ve been using my phone to pay in the US at many places in the last year – grocery stores, coffee houses, and an increasing number of retailers. The US lags behind other countries and mobile payments are not accepted everywhere, but there are some serious advantages for you and adoption is growing. You should give it a try. I’m able to pay with my phone about 50% of the time. Wells Fargo will let you access more than 5,000 ATMs with a tap of a phone instead of inserting a card.

Here’s an introduction to mobile payments.

How do you set up phone payments?

You probably already have the app on your phone.

On an iPhone, you’ll use Apple Pay.

On an Android phone, you’ll use Google Pay. (A couple of weeks ago Google changed the name and combined “Android Pay” and “Google Wallet.” The new name is Google Pay.)

On a Samsung phone, you can use Google Pay or Samsung Pay.

Each one will prompt you to add a credit or debit card when you start it the first time. Pick the card you would use most often for small purchases – groceries, coffee.

Not all banks and card issuers make this easy. If you’re lucky, it will go right through and the card will be available in the app. If not, the app will prompt you about what to do. It might require a phone call to the bank or it might put up other roadblocks, or perhaps the card issuer just doesn’t let its cards be used yet for these services. The only way to find out is to try it.

You can add other cards and switch between them, but start with one. It will be the default.

How do you pay for something with a phone?

Merchants are upgrading their point-of-sale terminals to accept credit cards with chips. Many of them are getting terminals that also handle mobile phone payments. If you see any of the above logos – Apple Pay, Google Pay, or the above logo (“NFC”), then the terminal is ready for you to pay with your phone. Some terminals are ready even if you don’t see the logo – I’m starting to try tapping before I pull out a card, just in case. Many salespeople don’t know about this yet; I’m frequently getting surprised looks and “oh, I didn’t know you could do that!” It makes people smile. 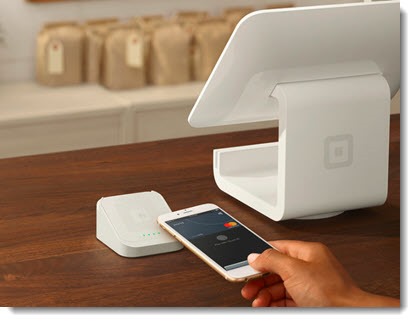 If you’re at a business that uses the small white terminals from Square (the ones that get swiveled toward you to enter a tip), then look for the small triangle on the counter – that’s where you tap.

Your purchase gets rung up. The salesperson pushes the button for a credit card purchase and turns to you expectantly.

You unlock your phone and hold it up to the terminal. (Take a look at the above pictures.)

Almost instantly, the phone dings and shows a picture of a credit card on the screen with a checkmark.

You do NOT have to open the app. Your phone will take care of that.

There might be one more step. On an iPhone, you may have to provide your fingerprint or facial ID one more time. If you set up a debit card, some terminals will have you put in your PIN. Frequently, though, there’s nothing else, just unlock the phone, hold it to the terminal, and you’re done in half a second.

It is crazy fast. Once you’ve done it, you will resent every second you spend waiting for the stupid card chip readers that we are cursed with now.

Making a payment with your phone is safer than using your credit card or debit card. It’s safer for you and for the merchant. It’s a win for everybody.

Security is a complex topic and you can find deep discussions of the subtle security differences among the payment systems. I’ve done a bit of research and concluded that this form of payment is safer than paying with a card. When you tap your phone, encrypted data is transmitted between the phone and the bank. Temporary transaction numbers are created – your card number is never transmitted. The merchant never sees your name. Obviously it’s safer than handing your card to a server who carries it to the back room and photographs the front and back and uses it to buy herself a trip to Hawaii and has a mai tai on the beach at your expense.

Google keeps a record of your transactions that you can access later online. So does your bank, but you don’t worry about that, right? Apple, Google, Samsung and your bank take your security seriously and they all make strong efforts to keep anyone from seeing that information. Google doesn’t sell information about your purchases to advertisers. Google employees don’t sit around at night giggling over what you bought. It doesn’t work like that. Give these companies some credit – these are dead serious services and they know you will only use them if you feel safe. I suggest you feel safe.

Why is the US behind other countries?

A huge percentage of sales in Australia, Canada, the UK, and many other countries are handled by tapping. It’s well understood and part of the culture in those countries.

For the most part, though, they’re not using their phones. The phone payment systems are slow to be adopted everywhere.

In those countries, the banks issue credit cards that have little NFC antennas embedded in the cards. The cards can be tapped instead of inserting them into a card reader. It’s the same effect – the sale goes through in half a second. Here’s a fascinating research article about the use of contactless systems around the world. Over 75% of face-to-face Visa transactions in Australia are contactless tap-and-go. More than 95% of all Canadian credit cards are contactless.

What happened in the United States?

Banks were ordered to issue credit cards with EMV chips – the ones that the slow chip readers can read – by late 2016. Across the board, the banks and card issuers screwed us over. They saved approximately thirty-five cents per card by not also including the NFC antenna.

That’s why you have to wait for the stupid chip reader when you pay for something – so your bank could save thirty-five cents.

It’s changing. More terminals are appearing all the time that can accept contactless payments, and a few card issuers are starting to issue contactless cards.

You don’t have to wait for a new card. See if you can get Apple Pay or Google Pay working now. Adoption of phone payments is likely to continue to go slowly in the US. You’ll have some friction on those times when you try to tap and the terminal doesn’t respond, leaving you fumbling for a card in your wallet. But the rewards are worth it and you don’t have to wait until everybody else is doing it. Join the Australians and tap your way through your purchases. G’day!