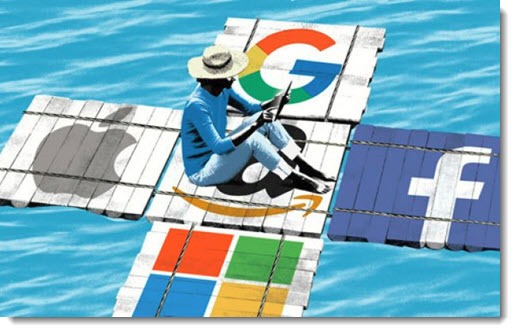 Five companies – Google, Apple, Facebook, Amazon, and Microsoft – dominate everything that happens in technology. They arguably wield more power than many governments and they have an outsized influence on the global economy.

These dominant platforms have created barriers for competitors. We haven’t had a major new technology company emerge in more than ten years.

As consumers, we are almost totally dependent on these companies and the platforms they have created. There are likely one or two that you can imagine living without, but almost no one could easily give up all products from all five companies and live anything that felt like a normal life.

I’m going to point out some obvious things – although this is the kind of change in our society that you might not have noticed even while it was happening right in front of you. I’ll let you decide if this bothers you. I don’t have an agenda to push, but in the next article I’ll mention two things happening in the political system right now that have the potential to increase the dominance of big companies.

The Internet began with the promise that blogs and websites would give everyone an equal voice. Small companies would flourish; innovation and competition would ensure that our online experience constantly improved. Much of that promise has now been taken away by the dominant platforms, which serve as gatekeepers intent on maximizing profits and making it harder for others to compete – and as a result, are in a position to control which ideas and opinions are seen and shared.

Tim Berners-Lee is credited with being the inventor of the world wide web. On the occasion of its 29th birthday, he wrote an article lamenting the Internet’s current concentration of power. “These dominant platforms are able to lock in their position by creating barriers for competitors. They acquire startup challengers, buy up new innovations and hire the industry’s top talent. Add to this the competitive advantage that their user data gives them and we can expect the next 20 years to be far less innovative than the last. What’s more, the fact that power is concentrated among so few companies has made it possible to weaponise the web at scale. In recent years, we’ve seen conspiracy theories trend on social media platforms, fake Twitter and Facebook accounts stoke social tensions, external actors interfere in elections, and criminals steal troves of personal data.”

Although the big five companies stand out (they are half of the top 10 most valuable companies on the US stock market), they do not necessarily prevent other tech companies from becoming huge. Uber has become important in the transportation industry, Airbnb is seeking to reshape lodging and hospitality, and Netflix is intent on becoming a leader in the entertainment industry. Almost certainly, though, companies like those will take their place beside the big five, not replace them.

The tech giants are increasingly focused on anticipating and preempting potential threats to their dominance.

•  They expand aggressively into new markets – for example, Amazon’s recent steps into groceries and health care.

•  They fiercely compete against companies that remain independent – for example, when Facebook built its own version of many Snapchat features into Instagram.

•  They control and profit from the infrastructure that competitors require in order to get started. Facebook and Google control online advertising; Amazon, Microsoft and Google control the cloud servers that startups need to run their businesses.

•  And finally, the tech giants have either benefited from or encouraged laws and policies that will increase their dominance. More about that in the next article.

The tech companies have mostly not used traditional monopoly tactics to acquire and increase their market power. Instead, they have created networks that provide useful, satisfying experiences to us – and that get stronger the more we use them. We have freely and happily created these dominant giants. Traditional antitrust actions are undertaken to increase supply and lower prices for consumers. Antitrust actions against the tech companies would likely create a worse experience for us, at least in the short term. As Ben Thompson put it: “That is the big conundrum in terms of antitrust and aggregation theory: if monopoly flows from a superior user experience, is mandating a worse user experience true to the ultimate goal of being pro consumer?”

This year more than half the world’s population will be online, according to Tim Berners-Lee. Anyone who is offline suffers serious disadvantages, “excluded from opportunities to learn and earn, to access valuable services, and to participate in democratic debate.” Being online today, however, does not put you in contact with the open platform that the web promised in its early days. Instead, it is a platform dominated by a handful of companies which effectively control online search, online advertising, and much of our social communication and sources of information.

Although smart people are thinking about how incentives can be changed to open the web back up for greater competition and innovation, nothing right now will stop these companies from getting larger, gaining even more control of their respective domains and taking over new ones, and getting even more insulated against the possibility of competition. Innovation hasn’t stopped, new companies will emerge, but there are good reasons to think we will be living for a long time in a world defined by the tech giants we know today.

In the next article, I’ll point to a couple of law and policy changes in the US that will only increase the dominance of the tech giants and make it harder for small companies to emerge and grow.