Microsoft Acknowledges The Inevitable: Windows Is Sailing Into The Sunset 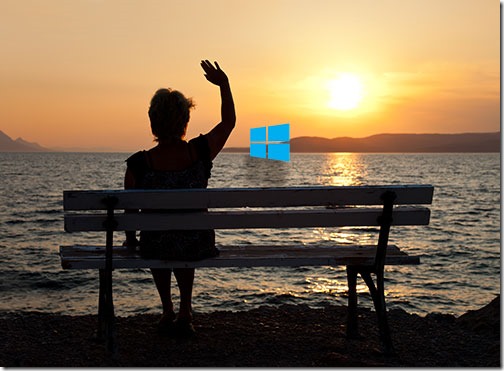 Microsoft announced an internal reorganization last week and raised the profile of its cloud, artificial intelligence, and enterprise teams.

This would not normally be an important event for us. Microsoft frequently reshuffles its employees. This reorganization, though, has major repercussions for every computer user.

Microsoft no longer has a Windows division. Windows is officially being recognized as a legacy product with no growth potential. Responsibility for Windows has been broken up and distributed to other groups. Terry Myerson, long-time Windows chief and 21-year Microsoft veteran, is leaving the company.

Microsoft CEO Satya Nadella has completed a transition long in the making. Microsoft is committed to a future as an enterprise and cloud company, while it manages the decline of Windows. The company is loosening the grip that Windows has had on Microsoft’s culture and core mission for thirty years.

In the next couple of articles, I’m going to give you some perspective on how we got to a world which suddenly seems unfamiliar, even though this has been in progress for many years. I’ll try to give you some answers to four questions.

•  What does the Microsoft reorganization mean for individuals and small businesses?

•  What caused Windows to lose its place at the center of our personal technology?

•  What could Microsoft have done to keep Windows relevant?

•  What has Microsoft done instead to try to stave off the inevitable?

What does the Microsoft reorganization mean for individuals and small businesses?

The world is not changing overnight. This doesn’t have any immediate impact on you. You will use a Windows PC to do your work for the foreseeable future.

Large corporations like Microsoft do not give up big products overnight. Microsoft will promote and support Windows for years to come. Enterprises change slowly and Windows PCs will continue to be the primary work devices for large companies for a long time. Computers are still the most effective productivity devices; nothing has changed that.

Publicly traded companies have to grow. The market is merciless and does not tolerate flat or declining revenue. Windows is a product in decline – still important, still generating revenue, but Windows revenue has been declining as a share of overall company revenue for many years. Satya Nadella deserves huge credit for taking Microsoft through another major pivot to cloud services and artificial intelligence, areas where Microsoft has the expertise and resources to drive tremendous growth in the future.

Once the effects of this reorganization have had time to play out within the company, there are a couple of areas that might affect users directly.

•  The schedule may be extended for major Windows updates. A year ago, Microsoft committed to two major updates to Windows 10 and Windows Server each year. That might have made sense if Microsoft could have delivered new features that anyone cared about, but those have been few and far between. The result has been that the updates have annoyed users twice a year when their work is disrupted or their computer suffers some side effect of an update, without any perception by users that the updates are worthwhile. Annual updates would be easier for Microsoft engineers, for developers, and for users.

•  Perhaps there will be less crap in Windows. Microsoft has been stuffing Windows with advertising and crapware for the last couple of years in a misguided attempt to find some way to increase Windows-related revenue. The Windows 10 Start menu is shameful right now, littered with Mickey Mouse and Bubble Witch and Minecraft and race cars. Perhaps the reorganization will relieve the pressure on the remnants of the Windows divisions and allow them to have a more businesslike focus.

That’s speculation, but we can dream.

What caused Windows to lose its place at the center of our personal technology?

Before we focus on phones, think back to the development of the Internet in the early 2000s. The seeds for this revolution were laid back then, although it wasn’t widely recognized. We had been locked into Windows computers since the mid-90s by our reliance on programs that ran only on Windows. The Office programs, financial programs, line-of-business programs, programs for creativity and design, games – all were tied to Windows, and our dependence on them led to the fulfillment of Bill Gates’ vision of a computer on every desk. Windows Server, which dominates global enterprises, has always been built to promote – almost require – the use of Windows desktop computers.

Although it was difficult to see it at first, the Internet began to break down that lock-in. Websites could be viewed on any device. Experiments began with tablets and handheld devices – unsuccessful at first but hindsight tells us they were precursors of the shift to come.

In the mid-2000s, our computers began to have all the power that we reasonably needed for personal computing. That was concealed for a while when Windows Vista turned out to be so badly engineered that it required more powerful computers to run acceptably, but the overall trend was clear. The lifecycle of our computers began to stretch out and we replaced them less often. That has continued to this day, particularly since Microsoft has worked hard to make each version of Windows – 7, 8, and 10 – run as well as prior versions without requiring new computers for more power.

But of course the introduction of the iPhone in 2007 was the event that changed everything. It took a year or so for Apple to add the app store, but then the flood gates opened. At first it was just consumers who discovered that phones could address needs that computers could not. Over time, business users began to bring their phones and iPads into their offices, again frequently to do tasks that computers could not do as well or at all. Before long we had all become accustomed to having powerful computers in our pockets. Many people now prefer to use phones instead of computers, even for tasks that theoretically could be done on either.

In 2018, we have little loyalty to our Windows computers. They are tools, nothing more. Alternatives are readily available. We have come to accept the security of online services and no longer feel a superstitious attachment to desktop programs and local databases. We began to resent the annual upgrade cycle that manufacturers of desktop Windows programs needed to survive, and became more accepting of subscriptions to online services and apps (the same thing in different clothing). The result is that development of Windows programs stopped dead. It is strange but true that not a single major new Windows program has been introduced in  more than ten years.

Meanwhile mobile devices have become the new standard for personal technology. It is an important sign that many new devices – especially home automation “Internet of Things” devices, smart lightbulbs and thermostats and security devices and the like – frequently can only be set up with an app on a phone. There is no website and certainly no Windows program to control them.

Sales of personal computers have been steadily declining since 2012. Microsoft was deeply disappointed by the reception for Windows 10, which did not generate much excitement in users’ hearts; far fewer computers were upgraded than Microsoft hoped, despite heavy-handed tactics used to push the free upgrade.

Six long years ago, I wrote an article about the possible consequences if Windows 8 failed in the market. I think I got it right.

“Windows will continue to be the dominant platform for enterprises and professionals but it runs the risk of becoming irrelevant – or at best, just another equal but decreasingly important option – for a generation growing up with no particular loyalty to it. Enterprises have already had to accept the nearly instantaneous explosion of tablets and smartphones that are way outside their normal security comfort zone, and anyone outside of an office already has a tenuous relationship to Windows at best.”

And here we are.

Next: What could Microsoft have done differently? How did Microsoft lose consumers?