Put A Google Home Hub On Your Xmas List 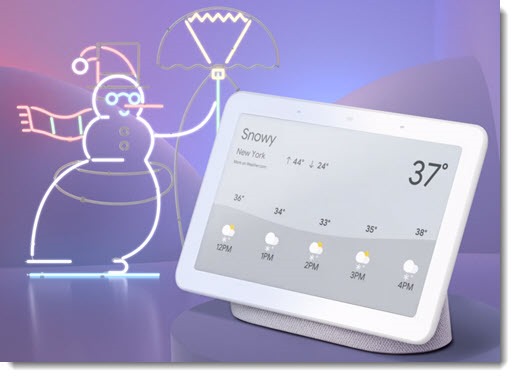 The Google Home Hub is my favorite home assistant. Put it on your Xmas list, or sneak one under the tree for yourself. If your pictures are stored in Google Photos, then the Google Home Hub is worth the investment just because it is the best photo frame ever. But Google Home Hub stands out for everything else it does, too, so it’s highly recommended unless you are already so deep in the Amazon Echo ecosystem that it doesn’t make sense to switch.

Let’s get the names straight. Here’s a picture of the original Amazon Echo and Google Home. 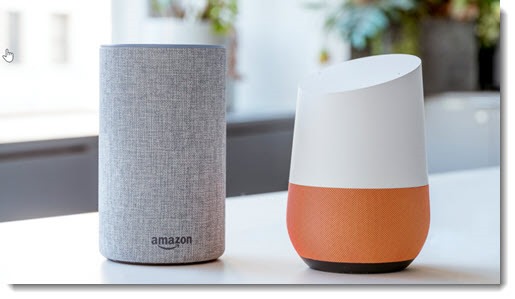 Amazon Echo and Google Home are speakers that respond to your voice, answering questions and performing tasks using home assistant technology – Amazon Alexa and Google Assistant – and doing useful things tied to your account with Google or Amazon. The original versions shown in the picture are under a hundred bucks. Each company also sells (or gives away) dirt-cheap small hockey puck versions, hoping that you’ll scatter them around the house. A Google Home Mini or Echo Dot is a great stocking stuffer.

For the 2018 holiday season, Amazon and Google added screens to their home assistants. Amazon updated the Echo Show, shown on the left in the picture below, with a lovely 10” screen, which makes it too big to fit on a bedside table, and bigger than I want for a kitchen counter. Everyone is different and you might prefer the larger screen to watch a video in the kitchen or to see a recipe from across the room. Great! The Echo Show might be perfect, or perhaps something like the Lenovo Smart Display, which runs Google Assistant with a 10” display.

Google Home Hub has a 7” screen, barely much larger than a big phone, which makes it exactly the size I wanted. It’s the perfect size for the bedside table. I’ve read reviews complaining that it’s too small for a kitchen counter but it seems just right to me. 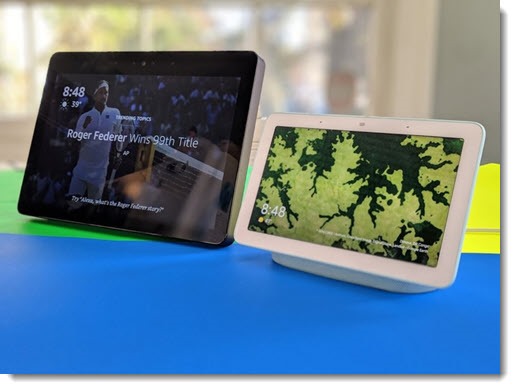 I’ve had an Amazon Echo and a Google Home in our kitchen for the last two years, curious to see which one would win our hearts. We ask each one for weather forecasts, for kitchen timers, and for answers to random questions.

In our house, the winner is Google Assistant by a mile. As you’d expect, Alexa is not as good at Google Assistant at answering questions, which is one of the things we use the home assistants for constantly. This shouldn’t be a surprise. One of Google’s underappreciated achievements in the last few years has been a transition to providing the One True Answer to our questions, instead of a list of websites that might answer the question. Google uses AI and machine learning and its vast knowledge of the contents of the web to distill a single meaningful answer to a trivia question, a recommendation for a local restaurant, a map, a phone number, or any of the billions of other things that humanity looks for every day.

Alexa looks things up in Wikipedia. Oh, she looks lots of other places too, but she just doesn’t have the answers that Google does. (And of course Alexa is a PhD candidate compared to Siri’s middle school ability to answer questions.) A few days ago Amazon announced a humiliating new service that will try to collect answers from Amazon customers to add to the Alexa database. Amazon’s VP of Alexa Information wrote, “While Alexa can answer the vast majority of questions customers are asking every day, every once in a while, customers throw curve balls at us with various questions like “Where was Barbara Bush buried?” or “Who wrote the score for Lord of the Rings?” or “What’s cork made out of?” or “Where do bats go in the winter?”” Need I say that the Google Home Hub will give you answers to those questions and a billion others instantly without complaining that they’re “curve balls”?

The display on the Google Home Hub adds a whole new dimension to the home assistant category. It’s used to show extra information or visuals when you ask about the weather, search for a restaurant, check your calendar, or ask for the news. The Echo Show does more or less the same thing.

But only Google Home Hub can connect to Google Photos. It helps you set up an album named “Family and Friends,” where you tap on as many faces from your photos as you care to include; Google Photos then assembles a dynamically updated album with those people in the pictures. The Home Hub then randomly shuffles through those photos, displaying each one in beautiful high resolution (and using machine learning to filter out blurry photos and duplicates). That’s only one of the options, though – you can set the Home Hub to display photos from any album in Google Photos, including an album called “recent highlights” that auto-selects your best recent photos. It’s another way that Google Photos becomes a unique and wonderful way to transform our memories.

Google Home Hub uses “Ambient EQ” to adjust the display in a way that seems natural but actually requires sophisticated technology. The color temperature and brightness of the display are dynamically adjusted to match the environment; at night, the display automatically turns off, or switches to a giant time display that is just bright enough to see when you squinch your eyes open in the middle of the night.

There are many more things that might tip you toward or away from the Google Home Hub. The Home Hub has no camera, which means it can’t be used for video calls. On the other hand, it can show YouTube videos, which the Echo Show more or less cannot do. (You might be able to get one to play in the Echo Show browser but it’s a poor experience with no voice control.) 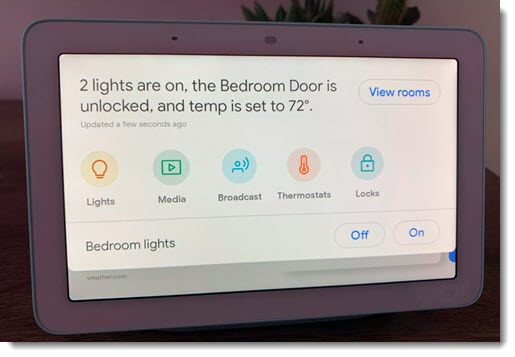 Both Amazon and Google home assistants integrate with most smart home devices – Hue light bulbs, Nest thermostats, etc. – but you might already have a smart home device that works better with one or the other. The display on the Home Hub for controlling smart home devices is particularly well designed, showing Google’s flair for simple design.

If you are invested in the Google ecosystem – and most of us are to one degree or another – the Google Home Hub becomes even more useful. It connects to your Google Calendar, for example, to show the day’s appointments when you wake up. It can show you a map and driving time to your destination, then send the directions to Google Maps on your phone. And you can use Google Cast to send video or audio to the Home Hub from your phone, which opens up a new world of possible applications for the Home Hub.

The full price of the Google Home Hub is $149, but expect frequent sales through the holidays – it was $99 over the Thanksgiving weekend, and it’s $129 this weekend. If you use Google Photos, it’s the best digital photo frame ever, and that might be enough of a reason to buy it. But there are a lot of other reasons that the Google Home Hub deserves a spot by your bed or on your kitchen counter. Treat yourself to a device powered by Google Assistant for the holidays. Once you get attached to Google Assistant, you might wind up like I did, with Google Home Minis scattered around the house.