Improve Your Home Wi-Fi By Meshing It Up 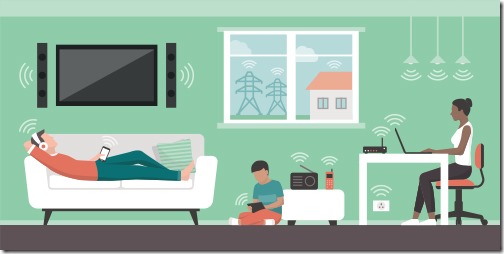 Got any Wi-Fi dead spots in your home? You can improve Wi-Fi coverage in your home more easily than ever before. There’s new Wi-Fi technology – “mesh networking” – that dramatically improves Wi-Fi signal strength without requiring any technical expertise. You’re feeling smug because you know all about Wi-Fi “extenders”, right? That’s not what these are. Extenders never worked worth a damn. This is new technology and it works brilliantly.

Lots of manufacturers are making these new Wi-Fi devices – Google Wifi, Eero, Netgear Orbi, Ubiquiti Amplifi, and others. I’m going to describe my experience with Google Wifi because that’s what I bought and I think they look pretty cool, but by all means go and read reviews and rely on The Wirecutter (which pooh-poohs Google Wifi) and soar like a bird and make your own choice. All of them work in basically the same way. Google Wifi is cheaper than the others and it’s the simplest and easiest to set up. I was convinced by this review.

These products are aimed at home users. Any business whose office has more than a couple of rooms is likely to want higher-quality Wi-Fi devices – not necessarily stronger signals but units that can be monitored and controlled more closely and that likely are each wired into the company network.

You’ve got a modem/router from Comcast or AT&T or Sonic somewhere in your home. It’s probably the current source of your Wi-Fi, blasting its signal into the air and getting weaker as you get further away from it in the house. 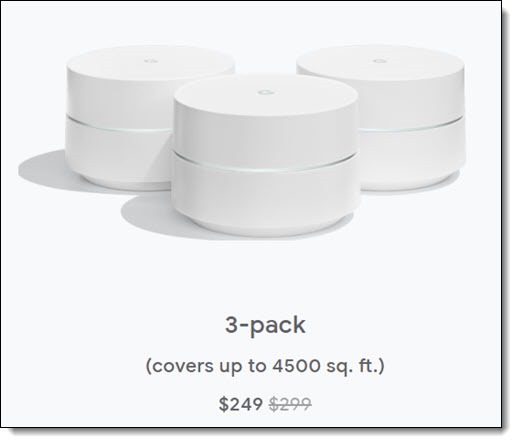 You’ll get three of the new devices. Most of the manufacturers sell a three-pack because it’s the most common choice. The Google Wifi 3-pack is shown above, currently $249. I’m going to describe Google Wifi, but feel free to substitute “Orbi” or “Eero” – they’re all basically the same.

All three Google Wifi devices are identical. The other brands may have one device that is considered to be the “first” one. The first one is located physically near your Comcast/AT&T/Sonic router. That seems always to be in a room at the corner of the house, the worst possible place for Wi-Fi that’s supposed to cover the whole house.

Attach the first Google Wifi device to the router with a network cable and plug it into electricity. You configure it with a drop-dead simple app on your phone. Note that no computer is required! Everything is designed to be easy and intuitive for non-technical people.

There are two ways to set it up. The easiest is for the Google Wifi to leave your existing router completely unchanged and just create a new Wi-Fi network. You’ll give it a name and choose a security code.

Pro tip: it’s also possible to put your existing router into bridge mode and have the Google Wifi take over as the router. More info here. They’re quite good routers and that setup avoids some double-NAT problems. But it works fine without doing that and requires some steps that are not for non-technical home users.

Walk another few rooms further and plug in the third unit and do the same thing.

Each device is extending and expanding the Wi-Fi network without any drop-off in speed. Each home is different but three devices ought to cover everywhere in a 2500-4500 square foot house. If you need more coverage, you can plug in more as needed. As long as each of them is within two or three rooms of another one, the network will work at full speed.

When you look on your phone or computer, you’ll still see the same Comcast/AT&T/Sonic wifi you’ve been connected to, but you’ll also see a new Wi-Fi network with the name you gave it in the Google Wifi app.

This part is important. You’ll want to connect everything to the new Wi-Fi network. Pretend the old one doesn’t exist any more. Switch your phones and computers and printers and Amazon Echos and Google Homes and the rest. It will save headaches down the road. For example, if your computer is on the Google Wifi network, you won’t be able to print to a printer on the Comcast/AT&T/Sonic network. (You might also have trouble connecting to printers that are wired into the network with cables instead of Wi-Fi. Easiest fix: connect the printer with Wi-Fi instead of the cable. All the other fixes are a bit of a technical pain.)

What’s going on behind the scenes?

Mesh networking has been used for decades to allow many devices to communicate effectively over the same network. In a way, the Internet is a giant mesh network. There are billions of connected devices; when you click to visit one of them, an elaborate global mesh network system makes smart routing decisions to connect you as quickly as possible.

The new Wi-Fi devices bring that technology to the consumer market at a reasonable price. This isn’t brand new technology; Eero was first to market with a consumer Wi-Fi mesh network device five years ago. The technology has matured and the kinks have been worked out, so non-technical home users can set them up with confidence.

The Wi-Fi mesh network devices use smart science magic to route packets around so they get to their destination with a minimum of fuss. It’s all about the smart science magic; the old-school traditional Wi-Fi extenders (which you can still get but shouldn’t) use stupid science magic and work badly. Obviously I’m not actually telling you anything about the technical details. It’s complicated. Instead, let’s go to the Tech Bullshit Generator and – ah, there we go, we’ll say the mesh devices synergize end-to-end convergence and let it go at that.

As you move around the house, the devices are communicating with each other to move traffic quickly, as well as making smart decisions to connect you to the closest and fastest Wi-Fi access point, and choosing the least congested channel and band. It’s good magic.

We are steadily increasing the number of Wi-Fi-connected devices in our homes. The mesh network devices are engineered to connect larger numbers of devices than your ISP modem/router can handle. If you’ve got a 4K TV connected by Wi-Fi , the odds are better that the mesh network devices will be able to deliver the speed required to watch a 4K streaming show without stuttering.

The result is that the devices can create connections that continue to be fast and strong anywhere in the area they cover, even as the distance increases from the first device that has the direct Internet connection.

Almost all of the manufacturers allow you to create a guest network, which is particularly valuable in offices that need the extra security. It allows anyone to connect to Wi-Fi for Internet access (with or without a password), but keeps the main network secure by not allowing the guests to access any other connected devices. Guests cannot hack into your computers or phones while they’re connected to the guest Wi-Fi.

Each manufacturer offers different options that might matter to you. Google Wifi has particularly effective parental controls, for example. With “Family Wifi,” you can suspend Wi-Fi access for your child’s devices with a tap on the phone, or set scheduled time-outs to turn off the Wi-Fi at bedtime.

The Netgear Orbi is far more configurable for power networking users. From a recent review: “Orbi uses the same network settings portal that Netgear’s high-end routers like the Nighthawk use. That means you’ll have standardized port forwarding settings, true QoS settings, a DMZ to keep devices outside of the software firewall, and more. It also has a separate radio for wireless backhaul, which means you’re not halving speeds at each hop.” If anything on that list matters to you, you’ll move past Google Wifi to Orbi or one of the others.

If you’re happy with the Wi-Fi coverage in your house or small office, you don’t need to change anything. If you ever find yourself disappointed by the low signal or slow speed of your Wi-Fi connection, remember Google Wifi and the other mesh network devices. This is new technology that can make a big difference.