Microsoft Thinks The Future Belongs To Teams (And It Might Work For You, Too)

Microsoft Teams is an Office 365 service that businesses can use for their employees to chat and collaborate, providing an alternative (and perhaps a replacement) for email inside the company. Although it’s relatively new, Teams has quickly become a strategic priority for Microsoft.

Many Office 365 services only make sense for large enterprises, but Teams might be the exception that even small businesses should closely examine. Microsoft will be promoting Teams heavily in 2019; you might as well get ahead of the curve and spend some time now figuring out if it might work for your business. 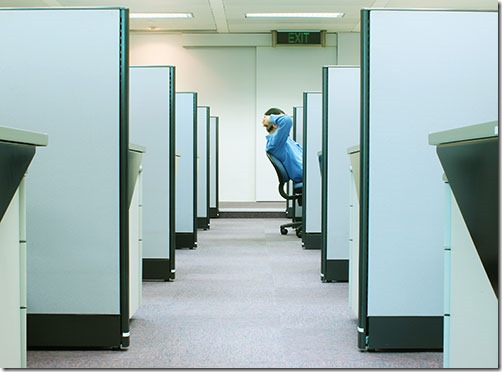 I don’t have any clients that use Teams. I’ve never supported it. No real world experience at all.

But my gut tells me this is the real thing. Microsoft is building on a relationship you already have with them and offering something that makes all kinds of sense. I think Microsoft is genuinely committed to Teams for the long haul; it doesn’t look like one of the blur of Office 365 services that appear on a list and disappear a couple of years later.

And I can imagine that Teams might work even for the micro-businesses that I work with, all of you with 5 or 10 or 20 employees. There’s some good stuff here.

I still haven’t described what Teams is, exactly, but hold on, it will help to have some background first.

If your business uses Office 365 for mail, then Teams is ready for you to use right now – and it’s free.

Microsoft has created a directory that includes everyone in the company with an Office 365 mailbox. (IT pros refer to it as “Azure Active Directory.”) Once you’re logged into your Office 365 mailbox, you can also use a lot of other Microsoft services, all linked to your business Office 365 account. There are dozens of services but almost none of them are used by small businesses – either they’re for enterprises only or they’re typical Microsoft glorious messes, confusing and overlapping and frequently short-lived.

Teams is the exception. It builds on the account you already have – no new password to remember! – and integrates with the apps and programs you already use. Microsoft has tried to build something that fits in with minimal interruption.

Teams is included with all of the Office 365 licenses used by small businesses – Office 365 Essentials, Premium, E1, and E3. (If you’re not an IT pro, you don’t know that Office 365 has different licenses. Don’t worry about it.)

And Teams is turned on by default now, so employees can explore it without waiting for permission. That’s both good and bad, because a business will quickly want to have some structure for Teams, but it might not be a bad thing if enthusiasts in a small business start poking around while no one is looking.

Teams might also appeal to offices that are not already customers of Office 365 but the advantages are less obvious. The integration with mail and other services, and the head-start of having the directory already populated with employees, make it a far better fit for businesses that are already invested in Office 365. In particular, businesses built on Google services will find almost no synergy that would make them choose Teams instead of the best known competitor, Slack.

In micro-businesses, the appeal will be greatest if your business operates from different locations –  separate offices, or employees who are frequently on the road or working from home.

If your business runs by email, with dozens of email messages every day that say, “How about tomorrow at 10am?”, “OK,” “There’s cake in the lunchroom,” and the like, then Teams could be worth the investment even if it is only used for chatting.

It does more than just chat, though. Let’s turn to a high-level overview of what in the world we’re talking about.

What is Microsoft Teams? 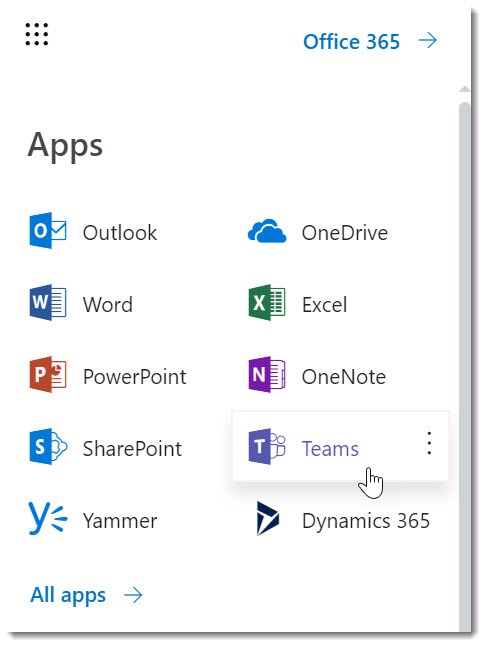 Microsoft Teams is an app that you can install on your computer or your phone, or use online in a web browser. Among other places, you can get to it by logging into Office 365 webmail and clicking on the apps grid in the upper left corner (shown above). It does not require Windows.

Employees are assigned to one or more teams – groups that work together on different projects or clients. Each team creates individual “channels” devoted to a particular project or client, plus there might be channels for fun or for nonwork conversations. There are no rules for organizing channels – they can be created on the fly or the business can control them to keep things organized. 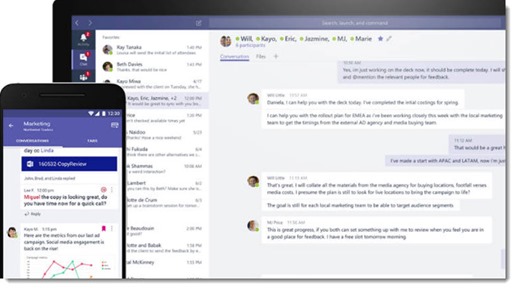 Teams starts out as a group chat program that employees can use to send messages to each other, and to view each other’s messages, instead of using email. It encourages a style of working that is less structured and more collaborative. (Remember, this is chat inside the company. This is not the reincarnation of AOL Instant Messenger that you can use to chat with all your friends. Chats can include non-Office 365 users but let’s keep it simple for now.)

Each team has a group calendar. Appointments that concern you in Teams are automatically entered into your Outlook calendar.

Impromptu video meetings with other employees – individual or group – take only a single click. Files can be shared and worked on together during meetings.

You can use Teams for audio, video, and web conferences with anyone inside or outside the company, with all the features of other conferencing services – notetaking, desktop sharing, chat messaging, and more.

Each team has a separate OneNote notebook, which opens up all the collaboration tools built into OneNote.

Files can be uploaded to Teams. That’s the extra feature that has the potential to change your workflow: You can store all the files for a project or a client in a single place where everyone on the team can access them and work on them together.

Behind the scenes, the files are stored in a Document Library in SharePoint. That’s right: for the first time, there’s a way to put SharePoint to use without dealing with its horrifying complexity and terrible interface.

Storing files online with Microsoft opens up another interesting possibility which you are not using but which has obvious appeal. You can open a file from Teams and work on it in the same desktop version of Word or Excel that you use now – and two new things happen: (1) the file is automatically and continuously saved, so there’s no risk of losing work because you forgot to hit the Save button; and (2) other people can collaborate with you and work on the file simultaneously.

So, to be clear: you can sit at your desk, start a video chat with a colleague, open up the same document on each of your desks, and work on the file together, adding notes on the side or in a chat window, and do all of that in ways that are reasonably easy to figure out.

Microsoft’s primary competitor for group collaboration is Slack, which grew explosively quickly in the last two years and will likely enter the stock market with an IPO this year. Originally it was believed that Microsoft’s product would be a me-too player that would appeal only to conservative enterprises. Microsoft is surprising everyone – perhaps even itself – by quickly taking the lead from Slack and integrating in an appealing way with the apps and programs that you already use every day.

How do you get started with Teams?

This page has a wealth of videos, QuickStart guides, documentation, and training for end-users. Go watch some videos!

Lynda.com has its usual excellent video tutorials about Teams. Lynda.com was acquired by LinkedIn, which in turn is now owned by Microsoft, but continues to be a fairly pricey subscription. There is, however, a 30 day free trial, which would give you a look at the Teams tutorials. Just don’t forget to cancel before your credit card is charged if you don’t want to continue.

If you’re an IT Pro, you may want to start with this collection of resources.

Early adopters can go check it out right now. Committing an entire business to it will require training, some planning, and the usual hurdle of convincing employees who have had Outlook at the center of their world for 15 years and are reluctant to change.

This seems to be the first genuinely exciting Microsoft product in many years. Now I want some of you to try it so I can get some real world feedback. Chat amongst yourselves for a while and let me know how it goes!