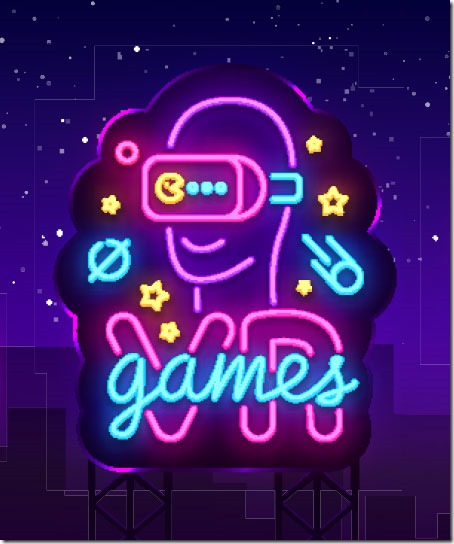 Oculus released two virtual reality headsets a couple of weeks ago. Doesn’t mean anything to you? Trust me – this is the most fun you can have with technology in 2019. I’ll try to describe it but more important: if you have a chance to get a demo of a VR headset, take advantage of the opportunity, even if you know full well you’re not the kind of person who will ever own something like it. VR makes a fabulous demo.

If you’re someone who might conceivably be tempted to own a VR device, it might be time to dive in. If you could see me using my Oculus Rift S headset, the sheer joy on my face, well, you’d laugh hard because people with VR equipment waving their arms around look stupid. But jeez, a little empathy, I’m having a fabulous time in there, and you could too.

Oculus Rift S is an updated version of a VR headset that’s been on the market for three years, with some significant improvements – lower price, simpler setup, and improved visuals. Like all the other VR headsets until now, the Oculus Rift S requires a long cable connected to a powerful gaming computer. Oculus Rift S is the most appealing VR device on the market today for gamers balancing money and features.

Oculus Quest is the first standalone VR headset – no computer required, complete freedom of movement without any cables, at a reasonable price. You can travel with it and use it in any room. There’s never been anything like it.

There will be others to follow but at the moment these two headsets open VR up to new people and perhaps represent a tipping point that will move VR to more of a mass market. 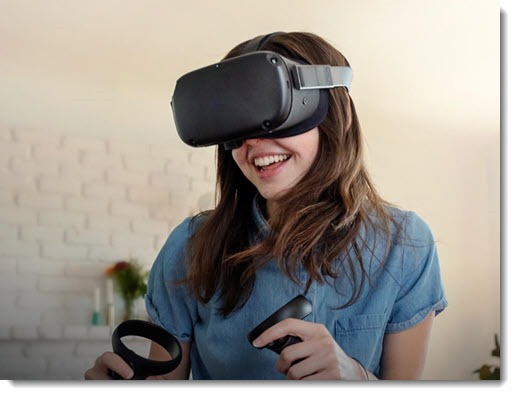 VR goggles cover your eyes. You see a picture on special lenses inside the goggles and you hear sounds through speakers near your ears (or through earbuds or headphones).

Inside the goggles, you’re looking at a 360 degree world. You can move your head in any direction, look up or down or behind you. One of the improvements with the new VR headsets is a larger field of vision – more like looking through glasses than binoculars.

You might be floating outside a spaceship with Saturn overhead – look up, see the rings, look left, see your spaceship. You might be up in a snowstorm in high mountains with a dragon landing in front of you. When a T Rex comes stomping down the corridor of the museum toward you, it appears to be the size of a T Rex, and when it swings its face down, it’s impossible not to flinch. The experience is immersive and completely unlike looking at the same scenes and characters on a 24 inch monitor.

Most of the VR experiences are designed for you to be standing up but with your feet relatively still, because your eyes are covered and you think you’re in the mountains and if you walk, you’ll probably fall down the stairs and die, which is considered to be a poor VR experience. Someday we might have the Ready Player One endlessly-walk-in-any-direction treadmill, but not today.

The visual quality has improved over the years until it is crisp and there are no defects to take you out of the experience, no pixels or blurry areas. VR games are not necessarily trying for ultra-realism, but the best of them are designed with high production values, just as you’d expect from a big-budget CGI movie.

The first generation of VR headsets was pretty clunky. They were expensive and required a gaming PC and complex wiring, complete with little satellite boxes to place around the room to track the location of your body and hands.

If you have a Playstation, it’s possible to get an inexpensive Playstation VR headset. The resolution is low, perhaps low enough to be unsatisfying even for newcomers, and there are too many reports of technical issues with, say, tracking, meaning it loses track of where your hands are, which is depressing when you’re being attacked by a murderous robot.

The Oculus headsets are the beginning of the second generation of VR headsets. Oculus deliberately decided to aim for slightly better quality at lower prices, and especially for a standalone headset, instead of pushing for the most advanced and powerful headset at a price almost no one could afford. (Not everyone was on board with that plan, leading to dissension in the board room and the departure of an Oculus co-founder last year.)

The Oculus Quest (standalone) and Oculus Rift S (tethered to PC) are both $399. They’re great. Purists with deep pockets are waiting for the imminent release of the Valve Index, a thousand dollar VR headset with higher resolution and controllers that track individual finger movements. Also, complicated cables and little satellite boxes to place around the room. Oh, and, a thousand dollars. I’m a big fan of aspirational devices but I don’t know that we’ll see a lot of those around the Xmas tree. 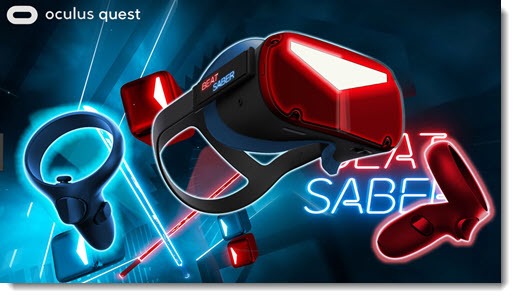 Oculus Quest is set up in a few minutes with an app on your phone. You’ll never know how complex it has been until now to set up a VR headset. The Quest has no cables, no PC required, a strong selection of games: it’s the first VR headset for the masses. It’s affordable, $399. The resolution is quite good – better than Playstation VR, not as good as the VR headsets run by a PC but hitting a sweet spot of being good enough. Speakers are built into the headset band, good enough for most games, a bit disappointing for games that are built around music.

The best selling VR game right now is Beat Saber, where your hands appear to be holding light sabers and you “slash the beats of adrenaline-pumping music as they fly towards you.” Go watch a bit of it, see if you like it. Personally, I cannot express my horror and revulsion, but hey, maybe it’s for you. I won’t judge you, to your knowledge. There’s a fast-paced shooter, Robo Recall, for youngsters with quick reflexes, and a puzzle-based story game, Moss, that could not be any more adorable.

If you don’t have a gaming PC but you’re interested in VR, this is the first time anything has ever been available to get started. The ease of getting started and the joy of seeing VR for the first time will carry you into it. At the moment the selection of games for the Quest is limited and does not include any AAA title you’ve ever heard of. (Name Of Your Favorite Game) is almost certainly not available on Oculus Quest. Your job is to look at the selection of games for Quest today, assume it will grow, and guess whether you will continue to use your Quest after it is no longer a novelty. 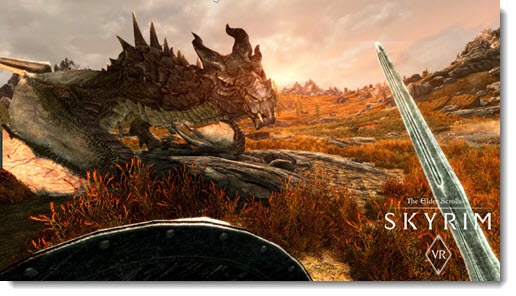 Oculus Rift S requires a much simpler setup than any previous VR headset tethered to a PC. There is only one cable and no sensors to place around the room. Treasure your sense of peace at not knowing what that means.

Put aside the technical issues for a minute. The Rift S improves on its predecessor and is the equal or better than today’s competitors in clarity and field of vision. (The refresh rate is another important spec and the Rift is good enough, meaning you’ll be happy but there are fierce debates online because that’s what Reddit is for.) Nothing about the visuals will take you out of the experience.

There is a huge selection of games that can be played on Rift S. It builds on the last few years of game development for the previous generation of VR headsets, capable of playing titles developed specifically for Oculus but also any VR title in the Steam store. Lone Echo is a AAA Rift exclusive that is the perfect introduction to VR, a gentle, slow-paced outer space story with stunning visuals and a plot worthy of a big-budget movie. There are action games, funny games, educational titles, short Pixar-style movies, and unexpected treasures like Google Earth VR, which allows you to experience Street View anywhere in the world as if you were standing in that location looking around and moving down the street. Remember, in the headset everything appears to be full-sized. It’s literally as if you’re standing in the middle of the street. Anywhere in the world. It’s kind of overwhelming.

Then there’s Skyrim VR, which was my impetus for getting a Rift S. Elder Scrolls 5: Skyrim has been around since 2011. It’s one of the best-selling video games in history. Almost every gamer has played it at some point. It’s a big open-world game in a huge world stuffed with mountains, waterfalls, caves and dungeons, magic, swords, dragons, and so much more. I spent sixty hours in Skyrim a few years ago and could have spent that much more exploring places I hadn’t seen yet. The graphics were a revelation in 2011 and the game is a little dated but still beautiful today.

A virtual reality edition of Skyrim was released last year for Playstation and Windows, playable on the Rift S. It’s the same game but such a great experience to see full-size waterfalls and 20 foot tall dragons! I am having the time of my life. I play on Novice level because I suck at video games, and I spend most of my time looking around and marveling at how cool everything looks. If you have any nostalgic feelings about Skyrim, this makes all the VR hassles worthwhile.

There are some hassles.

Rift S is better than previous headsets . . . and technically it’s challenging. You need a big video card, the right ports on your computer, crashes happen, I restart my computer constantly to get out of one glitch or another, and there are lots of things to complain about on Reddit. Like most things online, you should read lots of reviews and feedback, ignore the most vicious 20% of the complaints because online complainers are horrible and untrustworthy, and be prepared for some issues.

Oh, yeah, you might get sick. Some people do. The good news is, the incidence of nausea from VR helmets is way down as the resolution and refresh rates have improved, and many people get over their queasy feelings relatively quickly. I did short sessions for the first few days and I don’t think about it any more. Your mileage may vary.

Oculus is owned by Facebook. Doesn’t this mean buying a product from an evil company that should be broken up and possibly beaten with tire irons?

Yup. You have to be at peace with that.

Think about exploring a virtual world. If you’ve ever thought about it, this is the right time to put on a headset.