LastPass Learns The Wrong Lessons About Price Increases From LogMeIn 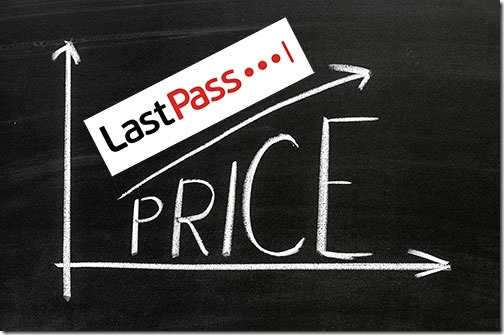 LastPass has learned some of the wrong lessons from its corporate parent LogMeIn, with price increases for LastPass Premium that land unexpectedly like tiny bombs on the credit card statement.

No action needed. Most people use the free version of LastPass (still free!), and the Premium version is priced reasonably compared to the competitors. I’m ranting because this brings up bitter memories.

LastPass is a free password manager that installs an extension to Chrome so it’s always available in the upper right corner. You can also install the LastPass mobile app on your phone to look up your passwords and log into phone apps.

You should use LastPass – or some other password manager, if you prefer, or a notebook where you write down your passwords, whatever works for you, as long as you create complex passwords and you never use each one more than once. Right? Don’t make me lecture you again.

Four years ago, LastPass was acquired by LogMeIn, causing many observers to shiver at the possibility that LogMeIn would kill the free version of LastPass and jack up prices. The free version of LogMeIn had been an IT standard for many years when it was abruptly killed in January 2014, and LogMeIn began punishing price increases, a bad habit that continues to this day. The article that I wrote about LogMeIn’s abusive price increases last year continues to get comments from frustrated ex-LogMeIn subscribers – prices unexpectedly doubling or quadrupling without any notice.

The free version of LastPass lives on, but LogMeIn can’t seem to kick the habit of price increases. 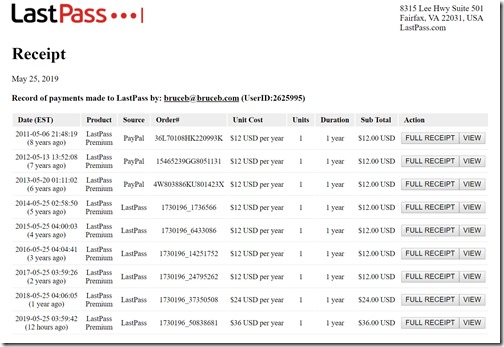 My billing history above tells the story.

Price increases are never welcome but it’s the way they’re handled that annoys me. The price doubled last year and tripled this year but the renewals were processed with no notice whatsoever, either about the upcoming charges or the price increases. An email arrived after my card had been charged, but I still wouldn’t have found out about the price increase if I hadn’t started clicking links out of curiosity. This is the email, which carefully says nothing about the amount charged. 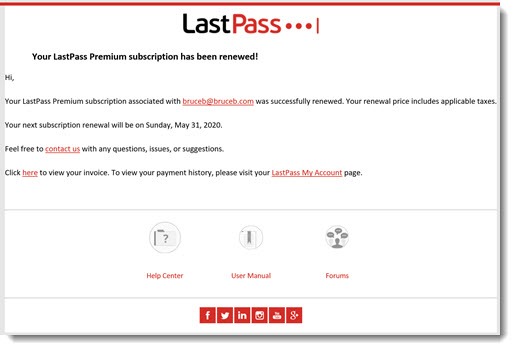 This is how I described LogMeIn’s deceptive business practices last year:

“LogMeIn has abused its customers for a long time. Its standard business practice – which appears to continue today – is to quietly increase its subscription prices, then process credit card renewals at the higher price without any notice. I had it happen to me – no email notice before or after the renewal, nothing that might call attention to the gouging. Oh, and no refunds, of course. LogMeIn disputes this and claims that it sends company executives to each subscriber’s house for prayer meetings and counseling about the price increases. And yet there are hundreds of stories online about price increases without any notice, going back for years and continuing today. I think the company is telling a little fib.”

Now they’re doing it with LastPass. I can’t be sure that I won’t be charged $48 or $72 for LastPass Premium next year. At some point it’s not worth it, and I don’t want to make that decision in hindsight and have to face a quarrel with a phone support rep to get a refund.

For what it’s worth, even at this price LastPass is not price gouging, at least not yet – at $36/year, LastPass Premium is priced comparably to the premium tiers of the highest-rated competitors 1Password, Dashlane, and Sticky Password. You can compare prices and features of the different programs at the end of this article. The LastPass Premium subscription adds some nice features – in particular, emergency access for trusted family members. I wrote about LastPass emergency access here.

The three important principles of LastPass

Don’t misunderstand me. I’m a staunch LastPass supporter – frustrated by the price increase but a true believer in LastPass for security in an insecure world. I’m going to repeat this summary for anyone who skipped the other lectures.

LastPass is a place to write down your passwords and save them so you can find them later. It’s a notebook where you can look things up, with a design that’s perfect for passwords and confidential information. It’s more convenient than the notebook in the drawer because it’s easy to search for things and you can get to it easily from all your devices.

That’s why there are three important principles for LastPass and other password managers.

(1) The master password has to be unique and very secure. It’s like a combination to the safe that holds all your money and everything dear to you. If someone can guess your master password, all your secrets are exposed and life is no longer worth living.

(3) You must never forget the master password. You’ve got that, right? Let’s not have any terrible mistakes.