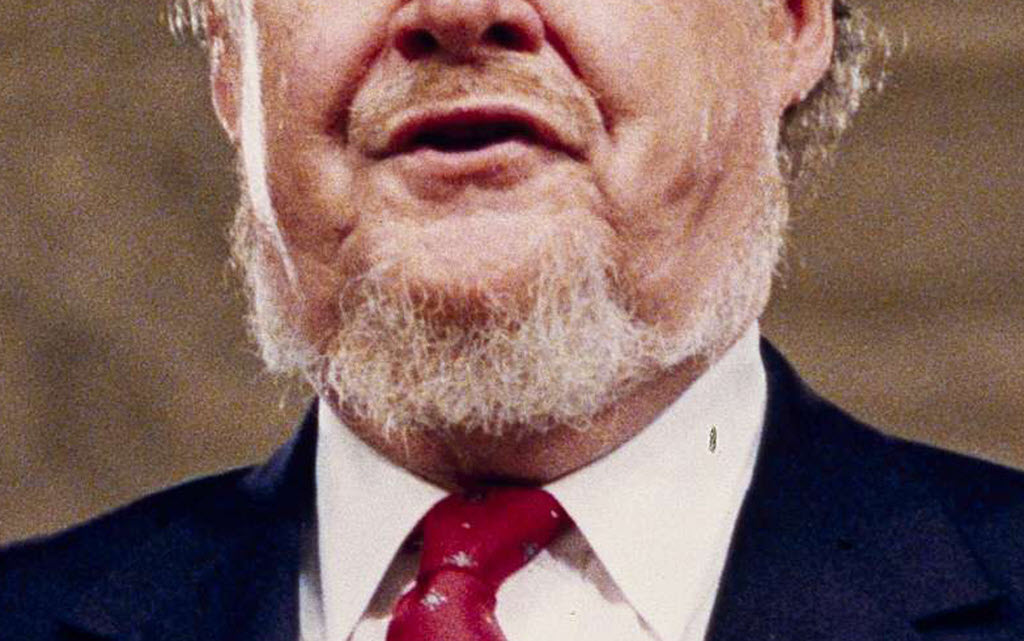 In the last article I said that the Facebook lawsuits “will be difficult to win under the standards used in antitrust cases for the last few decades.”

Rather precise phrasing, eh? It’s a literary trick called foreshadowing. I hope you felt the dramatic tension rise and you’re on tenterhooks now, waiting to see how the story develops.

There’s an interesting tale to tell of how we got to the place where tech companies (all companies, really) have no checks on their growth and greed and the government seems helpless to stop them.

Take a trip through a bit of legal history. I’ll make it short, I promise. Before we’re done, you’ll know a bit more about the villain – who did not have a handlebar moustache but did have an unusual beard – and you’ll have met one of the new heroes, a former advertising executive who has outlined a way to interpret antitrust law to protect your privacy.

Antitrust law has been used since the 1890s to keep a check on business excesses and protect consumers.

Since the 1980s, though, antitrust law in the United States has been broken. It was broken on purpose by rich people and large companies that wanted the government to be powerless to prevent them from getting richer and larger.

A movement is under way to change the interpretation of antitrust law, making it a useful tool again to prevent consumer harm and protect our privacy. That could be accomplished most effectively by Congress, but the federal courts could begin that shift in their decisions in current antitrust cases.

The Facebook lawsuit brought by the state attorneys general includes claims that fit within the current words of the antitrust laws but which would begin the process of redefining antitrust to fit the modern world.

How antitrust law was neutered in the 1980s

Ever since the Sherman Act in 1890, antitrust law in the US has been used to prevent large companies from becoming too powerful. As companies grow, they tend to compete unfairly, crush smaller businesses, scare off competitors, raise prices, and treat workers badly. (Fun fact: it’s not illegal for a company to have a monopoly under US law, but monopolists have an easier time doing other bad things so they tend to attract antitrust attention.)

It made rich people and large businesses unhappy when the government used antitrust laws to keep them from crushing competitors, because that kept them from getting bigger and richer, which was all they wanted out of life.

Robert Bork came to the rescue.

If you remember Robert Bork at all, it’s because he was the arrogant funny-looking weirdo whose legal opinions were too extreme to get his Supreme Court nomination through the Senate in 1987. (That’s his beard in the picture up above. Remember the beard? Faintly Amish and definitely disturbing.) It was a kinder, gentler, less partisan time in American politics and Anton Scalia had made it through the Senate only a year earlier, but Bork was so poorly chosen that he could not even clear that low bar.

Bork would be a historical footnote if the failed Supreme Court nomination was his only achievement, but he deserves notoriety for something with a far-more long-lasting and pernicious effect: a law review article in 1971 that became the foundational document for the legal doctrine of originalism. That’s a very deep rabbit hole but suffice it to say that the right-wing judges promoted by the Federalist Society for the last twenty years, and stuffed onto the federal courts in large numbers during the last four years, all claim to be be “originalists.” The word doesn’t mean anything anymore, it’s just recited as a mantra for the judges to decide whatever they want, but it’s an important part of the catechism.

Bork’s legal specialty was antitrust, and he became the leader of an influential movement associated with fellow lawyers and economists at the University of Chicago. Bork contrived a brilliant way to neuter antitrust laws in his book The Antitrust Paradox: by convincing judges and legal writers that antitrust enforcement should be wholly and completely limited to consumer welfare, and that consumer welfare refers exclusively to higher prices.

Read that again, it’s the central point. According to the Chicago school, the only thing that the government should protect against is monopolies that use their power to raise prices. As Cory Doctorow says:

Kurt Andersen describes the effect this way in his book Evil Geniuses:

“Again and again after that, Supreme Court decisions, relying on Bork’s arguments in The Antitrust Paradox, legalized behaviors by corporations—becoming virtual monopolies, stifling competition, and so on—that until 1978 everybody had agreed were violations of federal law and antithetical to fair, healthy free-market capitalism.”

An entire field of study, “Law And Economics,” was developed to carry these ideas into practice, with devastating effects on antitrust and business regulation. Our legal and business systems were rebuilt so that businesses could do whatever they wanted without restraint.

The movement has been so successful that antitrust laws have rarely even been mentioned in the last twenty years, no matter how obvious it seems that a proposed merger is anticompetitive or that a business is abusing its market powers.

The “Consumer Welfare” doctrine does not apply to tech companies

Some generalizations, using Google and Facebook as the best examples.

Google and Facebook provide services for free. If antitrust action is only justified by rising prices, then it simply does not apply to those companies.

Google and Facebook have achieved their market dominance because we freely choose them, not because they unfairly restrain competitors.

Ben Thompson has developed Aggregation Theory to describe what this means for the relationship between tech companies and consumers – and by extension, why antitrust law is powerless in this new world.

“This has fundamentally changed the plane of competition: no longer do distributors compete based upon exclusive supplier relationships, with consumers/users an afterthought. Instead, suppliers can be commoditized leaving consumers/users as a first order priority. By extension, this means that the most important factor determining success is the user experience: the best distributors/aggregators/market-makers win by providing the best experience, which earns them the most consumers/users, which attracts the most suppliers, which enhances the user experience in a virtuous cycle.”

There is no remedy under current antitrust law to reduce Google’s or Facebook’s market share other than doing something to make the user experience worse, and that’s not supposed to be the goal of law enforcement aimed at protecting consumers.

Imagine that the FTC decides that Google is being unfair to competitors. It forces Google to stop answering your question. Instead, Google is allowed only to give you a link to Yelp and TripAdvisor and a few other directories. You would have to click one of those links and find your answer buried in the ads and clutter on those other sites.

That would be better for Yelp, I guess, but it would be worse for you. Making your experience worse is not a good goal for antitrust law.

That’s a gross simplification of the economic theory. But it’s enough for you to understand that there are some fundamental and difficult reasons there have not been any antitrust actions against tech companies for twenty years, and why the ones that finally appeared are weak and seem to be beside the point.

The giant tech companies simply do not fit the antitrust laws as those laws have been artificially and intentionally narrowed since the 1970s.

“Hipster antitrust” is a term used sometimes proudly, sometimes as a pejorative, for the idea that the law should recognize that the concentration of economic power in a handful of large companies is inherently bad. There is a movement to shift the focus of antitrust law to include goals such as consumer privacy, income inequality, unemployment, and wage growth.

In 2019 a young advertising executive with a law degree named Dina Srinivasan read some economic history and thought long and hard about Facebook. She wrote an article for the Berkeley Business Law Journal, The Antitrust Case Against Facebook, which caught fire and has become widely read and influential.

Her conclusion was that Facebook harmed consumers by “charging” them for ever-increasing amounts of personal data, even if Facebook didn’t raise prices like a traditional monopolist.

If you define privacy violations as “consumer harm,” then there is at least a possibility of suing Facebook without completely unraveling the last fifty years of Borkism.

The antitrust lawsuit by the states requests the same result as the FTC complaint – breakup of Facebook by forcing it to divest Instagram and WhatsApp.

Its reasoning, though, in part rests on Srinivasan’s work, arguing that a free service can cause “consumer harm” within the meaning of the antitrust laws even without raising prices. The New York Times praised the arguments in the lawsuit:

“Like many big internet companies, Facebook makes money by selling consumers’ data. Consumers pay directly with their time, and, indirectly, to the extent Facebook’s fees raise the prices of advertised products. Competition helps to limit both costs.

“The idea that antitrust laws exist only to protect the price consumers pay was invented by conservative legal scholars in the 1970s. It has served for the last half-century not as a barrier, but rather to facilitate corporate concentration at the expense of other businesses, of workers and of economic growth.

“Modern antitrust law is an American innovation. Beginning in the late 1800s, Congress explicitly sought to impose limits on large firms to limit their political power and for the good of the economy. The Facebook case marks a welcome revival of that broader conception of the public interest.”

The Facebook lawsuit is a small attempt to break free of the shackles on current antitrust enforcement. You can expect to see more. European laws already have broader definitions of antitrust and unfair competition, and the EU is preparing to be more aggressive about regulating the tech industry. The FTC announced yesterday that it is investigating privacy practices at nine social media and video streaming companies, “as part of a wide-ranging investigative inquiry and not for specific law enforcement purposes,” according to The Verge. But the FTC could decide to take action in the future, and perhaps it will move further towards opening up antitrust law.

The threat of regulation and lawsuits has already changed the behavior of the giant tech companies. Facebook will be very busy in court for the next few years, and the simple existence of the antitrust lawsuit will likely cause it to be a better citizen, just as Microsoft’s culture changed after its antitrust experience in the late 90s.

And perhaps antitrust law will begin to unravel the worst effects of the “consumer welfare” doctrine and return to being an effective tool to promote, you know, consumer welfare.