Microsoft will release Windows 11 later this year. It is an incremental upgrade to Windows 10, with a facelift so it looks nice and a few small changes that mostly appear to be for the better.

I want to talk about Windows 11 a little bit – first to give you some perspective on why it exists, then to tell you a few details about what to expect. Fair warning: this is going to be a snark-free zone. There will be plenty of time (and lots of material) for articles later making fun of Microsoft’s profit-driven motives, poor execution, its inconsistency and missteps and fumbles. But not today. Today is nostalgia and sincerity. 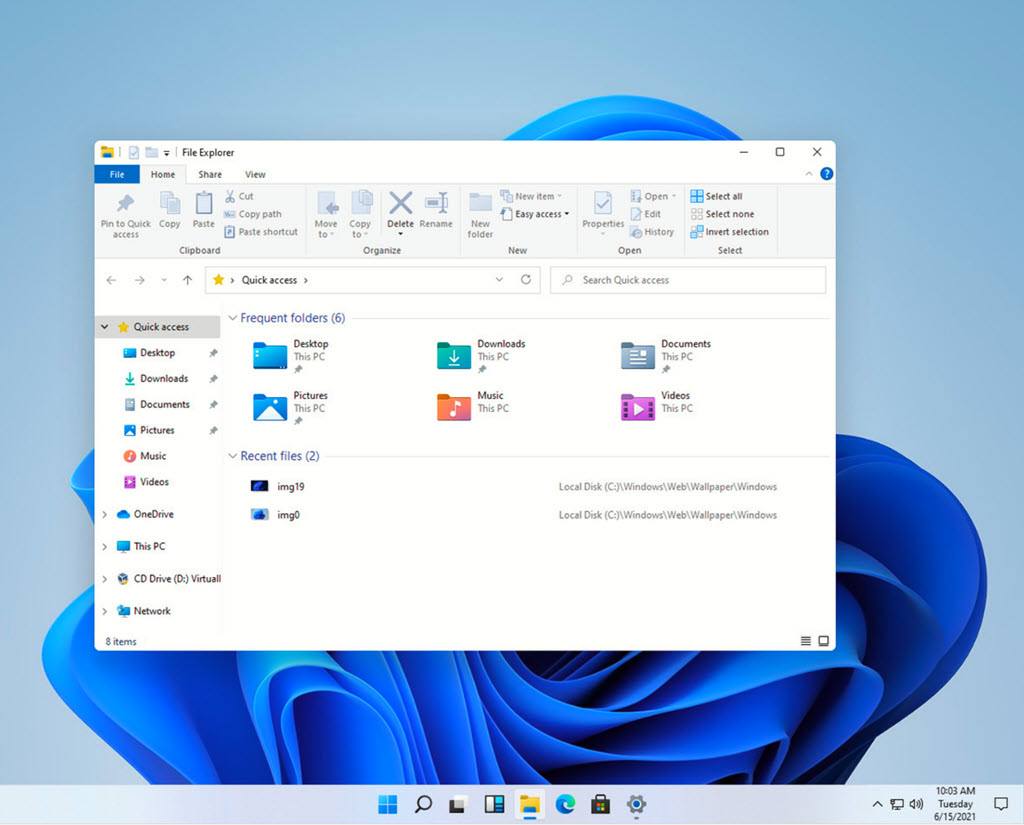 The screen above is your first glimpse of Windows 11. Study it. Look for the improvements. Oh, yeah, now you see it, the taskbar buttons are centered, that’s weird, but otherwise . . . hmm. For what it’s worth, make a note of the rounded corners on the File Explorer window. The rounded corners are a headline item in the Windows 11 feature list, which tells you something about what’s to come. Otherwise, it looks kind of familiar, doesn’t it?

There’s a lot to unpack from those feelings of familiarity. 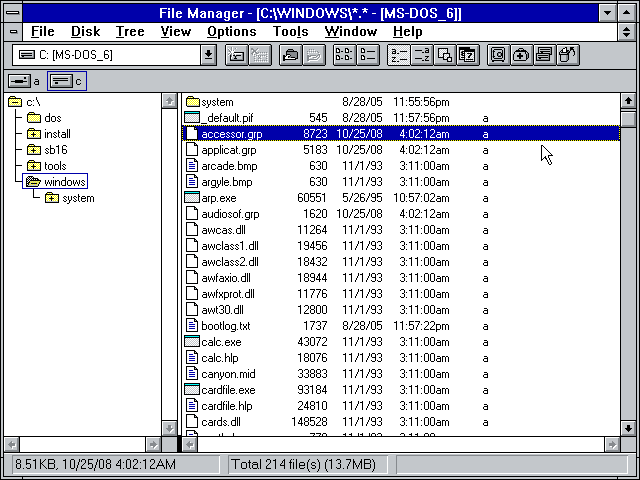 If you sat down at a computer running Windows 3.1 (1992), you’d feel comfortable. Oh, sure, it’s not the same as Windows today but you’d be surprised how many things are in the same place. File Manager looks dated but familiar, with a menu across the top, a column on the left showing the folders and sub-folders, and a pane on the right with the contents of the highlighted folder. Control Panel has icons for Printers and Sound and Mouse. Settings in Windows 3.1 were controlled by the registry, the database still used under the hood by Windows today.

Each version of Windows since then has incrementally improved the operating system. The appearance of the user interface has changed frequently – sometimes to follow fashion and add splashes of color (Windows XP) or transparency (Windows Vista), and once, in Windows 8, in a disastrous attempt to create a unified interface for computers and mobile devices. Under the hood, Windows has been rewritten and rewritten and rewritten to add network and Internet connectivity, to improve security, to support a nearly infinite array of hardware, and lately to connect to cloud services. Features have been added and removed, ribbons have appeared and disappeared, things have moved around.

It is always recognizably Windows. One thing has been consistent for thirty years, for better or worse: Windows has always reflected Microsoft’s deep commitment to continuity and backwards compatibility.

Windows 10 is six years old. I know, amazing, eh? And Windows has been evolving during the last six years just as it did in the 25 years before. If you compared the initial release of Windows 10 to the way it looks today, you’d see the same incremental changes, little differences all over the place.

That’s why you should expect Windows 11 to be a familiar tool to get your work done. It’s not a complete rewrite or a new operating system. Windows 11 will run exactly the same programs as Windows 10. It’s not one of Microsoft’s periodic experiments trying to make Windows fit on different processors. It doesn’t introduce new ways to compartmentalize or virtualize programs.

Windows 11 is a refresh of Windows 10, nothing more. But let’s not minimize that too much! The changes to the user interface include some modest but welcome improvements. Under the hood, Microsoft continues to improve Windows security and it is carrying forward a long effort to smooth out our experiences with hardware and software.

Microsoft has chosen to release Windows 11 with a new name and to change the interface enough that you’ll notice the changes. That’s just marketing. These updates could just as easily have been called Windows 10.1, or released as a service pack without any fanfare at all.

So Windows 11 will not be a magic improvement on the experience of using Windows. When you use Windows 11, programs will crash, just like they do today. Updates will muck things up. Printers and scanners will stop working occasionally. Microsoft will overstep in the advertising it uses to push its services. Windows 11 will run badly on cheap computers, just like always.

Remember the old days when new releases of Windows were a big deal? There was genuine excitement for the launch of Windows 95. Jay Leno and Bill Gates appeared onstage to promote the new release, the Rolling Stones song Start Me Up was used in commercials, Jennifer Aniston and Matthew Perry starred in a 30-minute promotional video, and the Empire State Building was lit to match the colors of the Windows logo. Consumers lined up at stores to buy the first copies at midnight.

But why? Why bother with the promotion? Microsoft became a two trillion dollar company last week, only the third company in galactic history to reach that landmark, and the growth is almost entirely powered by enterprise cloud services. Why does Microsoft continue to develop Windows?

Windows has a firm hold on a steadily shrinking market. Enterprises and small businesses will use Windows computers for the foreseeable future but new sales to business are declining, in part because computers last longer than they did a decade ago. Consumers bought a few more Windows PCs than expected during the pandemic but overall are using fewer PCs and more mobile devices. Current trends will continue: Windows PCs will sell in slowly declining numbers while Macs and Chromebooks continue to make inroads. Microsoft lost the consumer market years ago and nothing will bring it back.

But here’s the important point: big companies do not walk away from declining businesses. They work them and work them and squeeze revenue from them as long as possible. Marketing departments might secretly know the product they’re pitching is a fairly uninteresting minor upgrade but when it’s time to make the ads, it’s all singing and dancing and seniors’ faces lighting up.

And Microsoft can’t help itself. It wants to be cool. Here’s how Vox put it a few years ago: “It’s hard for a company that was once at the forefront of consumer technology to accept a future making profitable but obscure products for businesses. It’s a lot more glamorous to compete with Google and Apple than IBM and Oracle. So Microsoft keeps trying to boost its consumer profile, with little success, while the company’s revenues and profits come disproportionately from lucrative but unglamorous business customers.”

Expect to see seniors’ faces lighting up as we head into the holidays at the end of 2021. But don’t get sucked in and expect more from Windows 11 than it will deliver.

Enough with lowering expectations. In the next article I’ll go through a few specific Windows 11 features that look pretty cool.