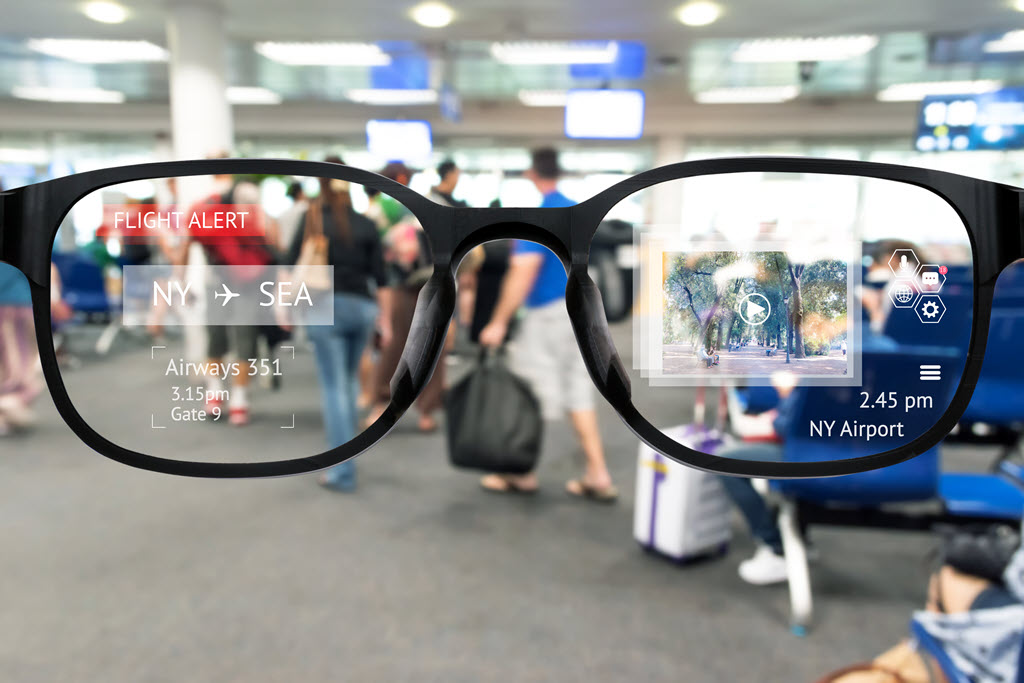 Augmented reality is going to be a Really Big Deal, but not for many years.

Every major tech company will spend billions of dollars in 2022 on augmented reality.

This is a transition year. None of the big tech companies will have a product to buy in 2022 that will help you understand why they’re spending all that research money.

A journey of a thousand miles starts with a single step. Lao Tzu said that a long time ago. He went on, “The first step is followed by a crapload of more steps, and each one seems pretty insignificant because a thousand miles is a really long way to walk.”

Augmented reality is going to arrive in little fits and starts. Each and every announcement will inspire articles explaining why a new product won’t be successful and the technology isn’t ready and the metaverse is a lie.

But that will miss the point. Each announcement will be a small step forward. After a lot of small steps, eventually we’ll have gone a thousand miles and it will be obvious that AR is the technology that will supersede computers and phones. Also, we’ll be tired. Seriously, walk a thousand miles?

These will be generally accurate descriptions for the foreseeable future.

In virtual reality, you are wearing goggles that block your view. Everything you see is created digitally – but it appears to be full-sized. It might be a meeting room or the bottom of the ocean or a fantasy world full of monsters. The defining features of virtual reality: you can’t see the real world around you; and what you see appears to be the size of the real world.

Augmented reality is anything that lets you see the world around you AND digital stuff overlaid on top of it.

In 2022, the tech companies will mostly be talking about virtual reality, not augmented reality 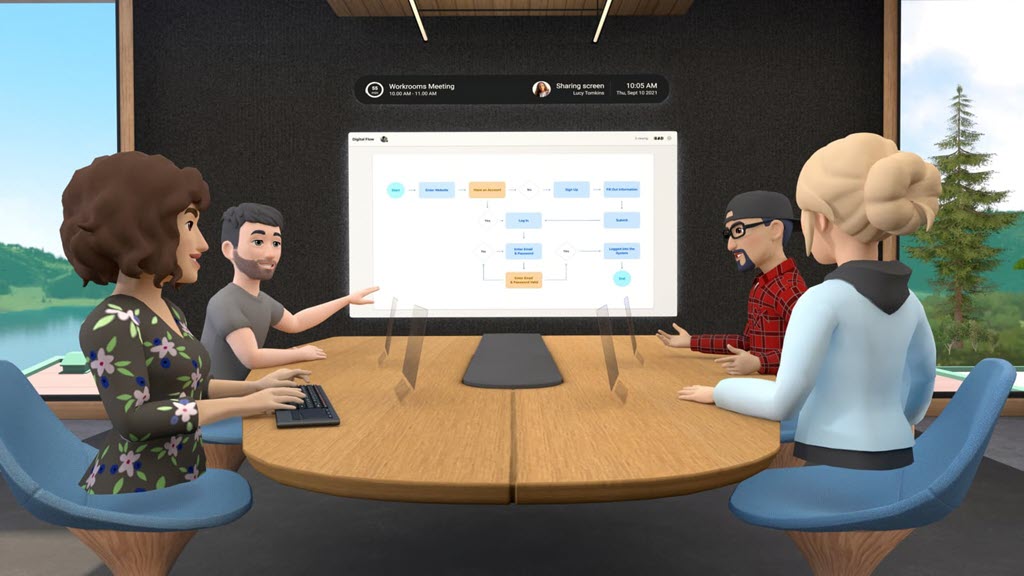 VR headsets will improve this year – Oculus will refresh its lineup, and Sony will release a new generation of Playstation VR. The headsets are getting lighter and resolution is improving. Oculus headsets are standalone – they don’t require a cable attached to anything else. The new Playstation VR headsets will be tethered to the game console with a cable. There will be flurries of interest, a few more big-name games, and lots of hype about using VR headsets for virtual meetings, like the above picture.

If you’re curious, by all means explore the world of VR! I love VR. I use my VR rig frequently to play games. I watched Dune in VR on what appeared to be an Imax-sized screen.

Here’s the important thing for non-gamers and non-tech people.

Virtual reality will never be mainstream. You will miss exactly nothing if you ignore everything that happens this year. A few businesses will hold virtual reality meetings in 2022 but it will still be basically a gimmick. A few more enthusiasts and teenagers will hang out in VR meeting rooms but nowhere near the critical mass that changes the world. The metaverse will not blossom into a rich place where we live all day, slowly turning into obese Wall-E couch-riding lumps.

The messages from the companies investing billions of dollars will be confusing. The companies won’t distinguish between virtual reality and augmented reality, partly because they know you won’t understand the details no matter what they say, and partly to create the impression that there is something happening in virtual reality in 2022 that deserves attention.

Facebook rebranded the entire company as “Meta” a few months ago. Mark Zuckerberg delivered a lengthy speech about his vision of the metaverse to launch the entire company in a new direction. The Meta home page promises “3D spaces in the metaverse will let you socialize, learn, collaborate and play in ways that go beyond what we can imagine.” The New York Times summarized Zuckerberg’s picture of the metaverse as a place where “people can play virtual games, attend virtual concerts, go shopping for virtual goods, collect virtual art, hang out with each others’ virtual avatars and attend virtual work meetings.”

This is a confusing message about two different things.

For the foreseeable future, Zuckerberg is describing virtual reality. I expect Facebook to introduce virtual reality apps that can be used for casual interactions, business meetings, and education. They will go along with a marketing push for the new Oculus VR headsets.

Facebook expects to make serious money with virtual reality – in addition to the hardware sales, Facebook has been buying almost every company that creates virtual reality software. 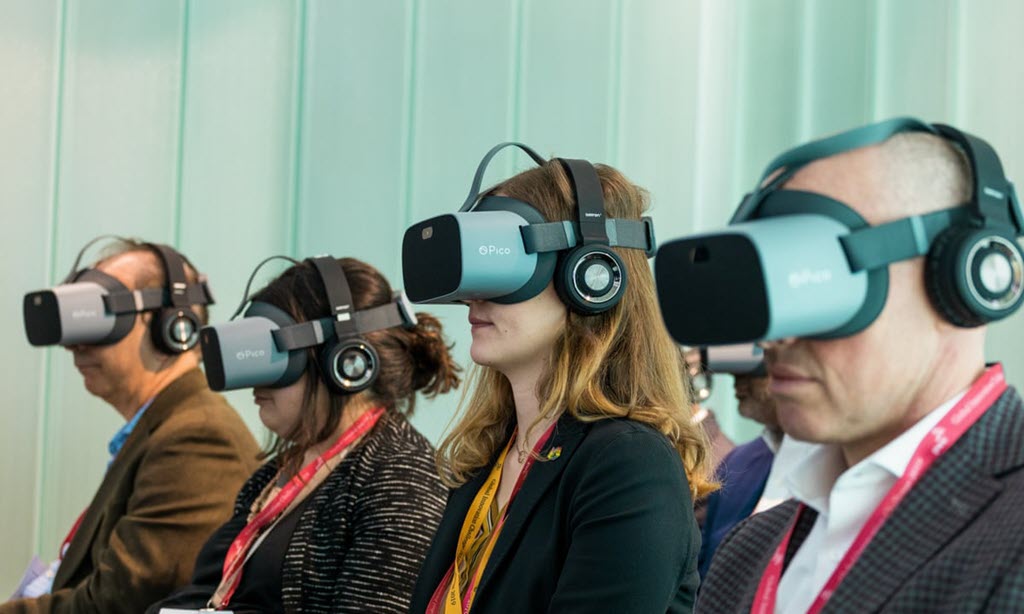 But go back to point number one above: VR will never be mainstream.

The picture at the top of this section is what a VR meeting looks like to participants using Facebook/Meta’s Horizon Worlds app. Pretty fun, eh?

The picture directly above is what those people look like in real life wearing VR goggles.

Very few executives will put on VR goggles so they can look like cartoons. Zoom meetings – yes. VR avatars – no.

In 2022, a few million more people will buy VR headsets. Some of those people will begin to use them consistently. (Lots of VR headsets are used for only a few months, then set aside when the novelty dies off.) That is a long, long way from Zuckerberg’s vision of a metaverse for everyone – but make no mistake, it will be a small step in that direction.

But now let’s add point number two: Eventually AR will be a mainstream technology used by almost everyone. Eventually. Not in 2022.

That’s why Zuckerberg’s speech is best understood as having a second message: when augmented reality arrives, Facebook/Meta intends to be the dominant AR social network.

Maybe Facebook/Meta will sell AR hardware, but mostly Zuckerberg wants Facebook/Meta to have the best developed tools for social networking and chat in augmented reality, regardless of what company produces the best AR glasses. The goal for Facebook/Meta is to be able to hold our attention in AR and generate wheelbarrows of advertising revenue when AR becomes mainstream, just like Facebook does today.

It will take a while to arrive. Let’s stop there for today. In the next article I’ll outline the small steps that you’ll see in the next few years on the thousand mile journey to AR.