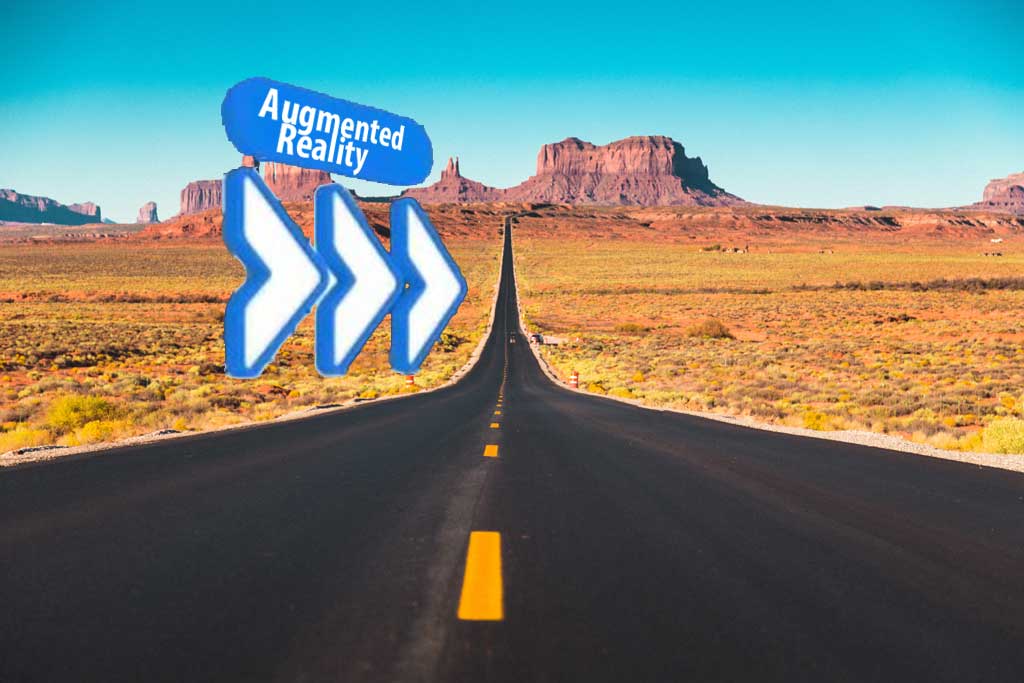 See if I have this right. You read the last article and you agreed completely that you can ignore virtual reality, because that’s what you wanted to hear. But you can’t imagine why I say that augmented reality is going to be a big deal, so you skipped that part.

Here’s the way the next few years will go as we make our thousand mile journey to an augmented world.

Starting now, you’re going to hear the words “augmented reality” all the time

You don’t have to pay attention or know what it means. Cumulative repetition is the first part of having new technology become part of the culture. In the last few weeks, you probably read something about Facebook’s rebranding as “Meta” and its desire to create a happy new virtual/augmented world. Or perhaps you skimmed a business article last week about Magic Leap’s decision to focus on enterprises, starting with AR devices for medical professionals. The word “metaverse” will be an annoying buzzword for a short while, much like NFT and Web3, which helps explain the New York Times article a couple of days ago about Microsoft’s $70 billion acquisition of game company Activision/Blizzard – the largest acquisition in Microsoft’s history – which said: “Microsoft framed the deal as strengthening the company’s hand in the so-called metaverse, the nascent world of virtual and augmented reality.” There will be more, lots more.

The details don’t matter. The point is that the term “augmented reality” is creeping into our world. Now that I’ve mentioned it, you’ll start to see it right away. Everyone else is seeing it, too, they’re just not noticing it yet.

Both companies are further along than you realize with AR glasses for specialized uses, especially in healthcare and manufacturing.

AR has so much potential in the medical industry that healthcare companies are already working hard to develop their own headsets or create systems for Hololens or Magic Leap glasses. Read this wonderful press release from Philips last month – I love the density of the jargon and the reminder that we live in a science fiction world.

There was chatter that Apple would announce mixed VR/AR glasses in just a few months and ship later in 2022, but the latest rumors suggest those dates will slip, so we may not see what they are working on until 2023.

The first Apple glasses will be cool but they will NOT change the world, not right away. They will be expensive and limited by hardware that is elegant but probably not ready to wear out in the real world yet. There will be relatively few apps. It’s possible that AR’s technical difficulty will mean Apple’s first glasses will be VR only – but with the promise of AR to come.

Mass market consumer AR glasses are years away, with many technical problems to overcome first.

But Apple’s open embrace of augmented reality will bring awareness to the world. That’s what happens when Apple enters a market. It’s just fine if it takes a few years to refine a new Apple product and turn it into a mass market item.

Take a trip down memory lane. When Apple introduced the iPhone fifteen years ago, it was expensive and limited. There was no app store. It didn’t have a front camera or a flashlight or GPS. It was not original; it followed years of development of mobile devices from Microsoft and others. But Apple’s endorsement of the concept of a mobile Internet-connected device (AKA Apple’s reality distortion field) made it seem that Apple was responsible for changing the world.

Other companies are working on AR glasses, in addition to Microsoft and Magic Leap, but Apple will be hailed as an innovator when it enters the field.

Businesses will begin to use augmented reality in meetings

I said in the last article that very few businesses will hold meetings in virtual reality. As glasses improve, it is almost a certainty that at some point in the next few years, businesses will begin to use augmented reality routinely during meetings. I would guess that Microsoft will lead things off with AR apps for business meetings that work cross-platform with Hololens, Magic Leap, Apple’s glasses, and whatever else is on the market. That will let people sit at their own desk, using their own computers, but sharing virtual whiteboards and presentations that appear to be lifesize, not limited to the computer screen.

For many years, AR glasses will be purpose-driven. We’ll put them on to do something specific, then take them off

A well-sourced journalist reported this week that Apple is very clear-eyed about this, and happy to contrast its vision with Facebook’s description of an all-day every-day metaverse.

Bloomberg’s Mark Gurman reports that he’s been told “pretty directly” that the idea of a “metaverse” is “off limits” internally at Apple. This, of course, is a stark difference from the strategy of companies like Facebook (now Meta).

Gurman: “Here’s one word I’d be shocked to hear on stage when Apple announces its headset: metaverse. I’ve been told pretty directly that the idea of a completely virtual world where users can escape to — like they can in Meta Platforms/Facebook’s vision of the future — is off limits from Apple.”

Instead, Apple’s focus is said to be on a mixed reality headset that is used for “bursts of gaming, communication, and content consumption,” but it will not be “an all-day device.”

Eventually, though, we will begin to wear AR glasses all the time

The glasses will become lighter and tech problems will be worked out. We will become used to the look of people wearing the glasses, and we will start to depend on the extra information displayed while we wear them.

It will be more or less the same path as the development and acceptance of computers and the internet in the 90s/2000s, and with phones since the iPhone arrived in 2007. AR will become so ubiquitous that it’s easier to just keep the glasses on. It’s second nature now to have our phones in our hands for a thousand different reasons – texting or watching videos or following directions or looking at photos or playing games. It wasn’t always like this! We grew into our dependence on phones over a decade.

Each of us will have different augmented reality experiences that draw us in. Full size whiteboards for meetings. Arrows pointing to the direction to walk or drive. Instant conversations with friends. A new generation of games. Assistance with some aspect of our jobs. Things that we can’t imagine yet.

You won’t wear augmented reality glasses until they’re light and reasonably normal looking, without too many tech fiddly bits. Technically that requires nearly impossible improvements in processor and AI power, lens resolution, and battery life. There are also very hard problems about how to handle input.

As always, most of that will be handled by very hard work and incremental improvements over a long period by talented groups of engineers sweating and experimenting and getting things right and trying things that don’t work and trying again. That’s what the big companies are doing right now.

At any time a blinding insight might change that path. Which of these will be science fiction and which actually happen? Maybe new battery technology unexpectedly provides power for a week from a battery the size of your thumbnail. Perhaps an armband reading the nerves in your wrist turns out to be an intuitive and successful way to input commands. Maybe experiments go well with tech that uses lasers on your retina to create the images. Or contact lenses turn out to be the perfect way to deliver high resolution augmented reality images. Perhaps a bioscientist will develop nanobots that can be injected into your bloodstream and send augmented reality input to your brainstem. Or maybe it will be some other brain/computer interface, to use the term favored by Gabe Newell, founder of Valve, one of the world’s premier game companies.

If any of those come true – and none of them are impossible – it will change the timetable for augmented reality to become part of our daily lives. So maybe I’ve outlined a process that will take ten years – or maybe it will take four years or six years because tech advances speed things up.

An augmented reality world? You’re already living in it. (Those yellow first down lines in football games are a technical marvel.) There is much more to come and a lot of it sounds like science fiction – but it’s closer than you think.