Stephen King And A Gentle Madness

Everybody comfy? I want to tell you a story about book collecting.

Wow, that was like Thanos snapped his fingers! Half of you just disappeared, winked out, leaving empty seats. My thanks to those of you who are still reading.

I have a story about Stephen King and limited edition books and finding a holy grail.

Stephen King’s first professional sale came when he was twenty years old and sold a short story named “The Glass Floor” for $35 to a short-lived magazine named Startling Mystery Stories. The magazine published the story without fanfare in the Fall 1967 issue and went on to publish another story a few issues later – King’s second professional sale.

There have been hundreds of pulp and digest magazines printing science fiction, horror, and detective stories, going back to the 1930s. Most issues aren’t valuable. It’s easy to find yellowing copies of Weird Tales and Amazing Stories and Astounding and Galaxy for a few bucks apiece. 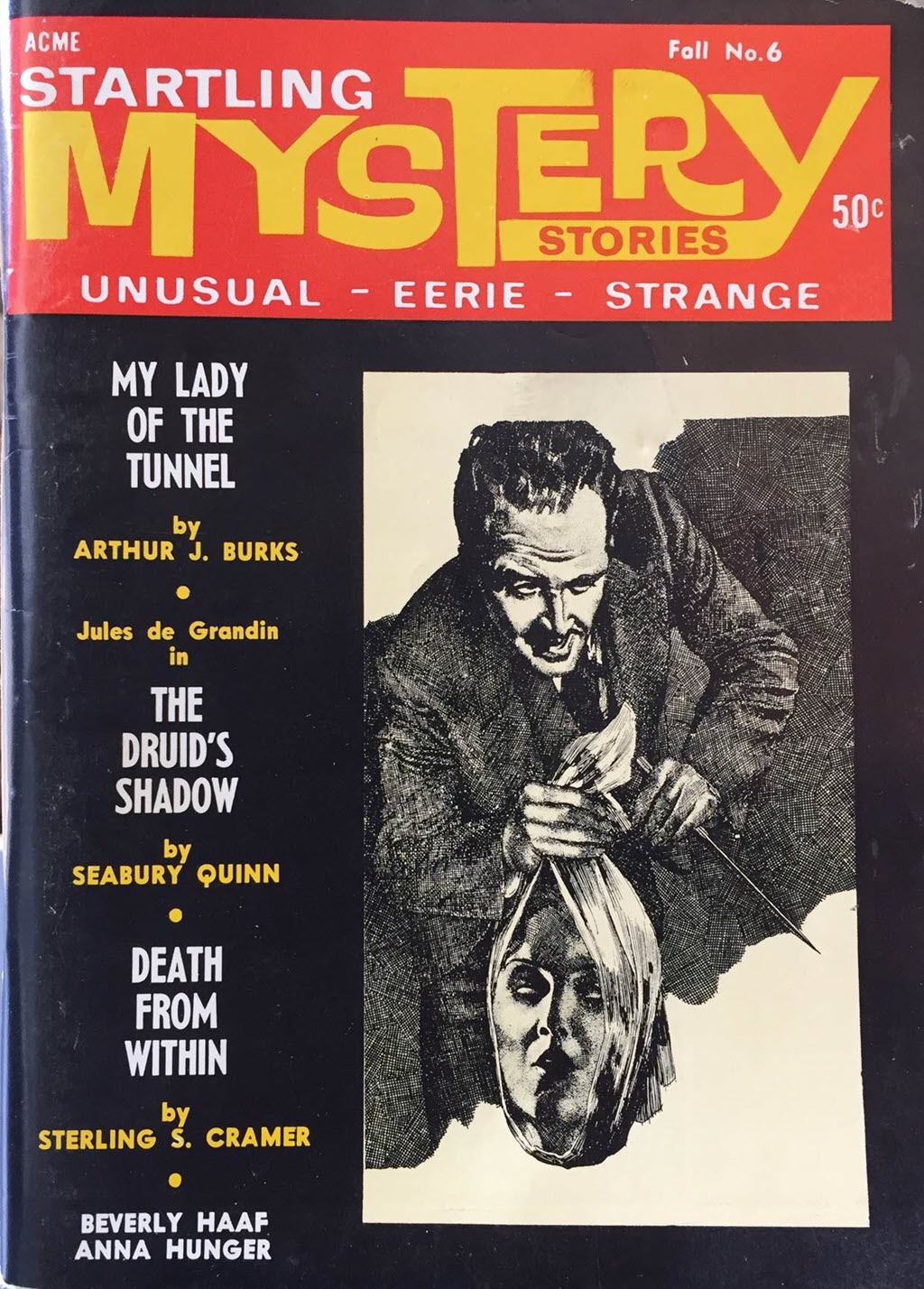 But Stephen King’s first published story – now that’s something special to collectors. Startling Mystery Stories issue number 6 is barely a magazine, more like a pamphlet, but it’s hard to find and valuable to people who care about such things.

Keep it in mind. We’ll come back to it.

You might have heard about this guy Stephen King. He’s the best-known author in the world, more than 60 novels to his name, winner of a nearly infinite number of awards, widely respected for the quality of his writing and his work ethic.

He’s also one of the most collected authors today. That’s related to the quality of his books, of course, the fact that so many people like them so much. First editions of his early novels, when print runs were still small, have skyrocketed in value, as you’d expect.

But Stephen King also got involved early in a wonderful branch of the publishing industry devoted to signed limited editions.

I think it began with Firestarter. Viking published 100,000 copies of the trade edition of Firestarter in 1980. That’s what you saw in bookstores.

At about the same time, tiny publisher Phantasia Press produced 26 copies of Firestarter wrapped in asbestos. Well, it’s actually aluminum-coated cloth, but it was made to look like asbestos. Such a great concept! Nobody ever saw one but at the time everyone knew about it.

Phantasia also printed 725 numbered copies of Firestarter with a special dustjacket and slipcase. Stephen King signed and dated each copy.

The lettered asbestos copies are almost never for sale. If one came on the market today, it might sell for, who knows, $30,000? $40,000? More? A numbered Firestarter occasionally turns up for a few thousand dollars.

The important thing is that it represents the beginning of a long tradition of signed limited editions of Stephen King books. In addition to the bookstore releases, virtually every Stephen King book has been released in special printings by small publishers, interesting or unusual or artistic versions of each book, usually with numbers or letters to make each copy unique, and almost always with his signature.

Stephen King has signed thousands and thousands of books over the many decades of his career. He is so well loved that any signed Stephen King book is valuable to collectors. But the limited editions are special – they’re scarce and many of them are very high-quality pieces of art, so there is a large community of collectors seeking signed King limited editions.

King had the clout in 1996 to set up an unprecedented publishing event: two King books were released simultaneously by different publishers. Viking released Desperation; Dutton published The Regulators. The books were related to each other, set in parallel versions of the same universe, so the publishers cooperated on matching trade editions with complementary covers.

The twist was that The Regulators would bear the name of King’s pseudonym “Richard Bachman.” King released several books in the 80s under the Bachman name. Eventually he was outed as the author of the Bachman books, leading to lots of interviews and promotional materials about King and his alter-ego Bachman, including details about Bachman’s death in 1985 from “cancer of the pseudonym.”

So releasing a book in 1996 with Bachman’s name was a comfy in-joke, not an attempt to hide King as the author. The Regulators included a fictional explanation that the manuscript had been found in Bachman’s effects by his widow. 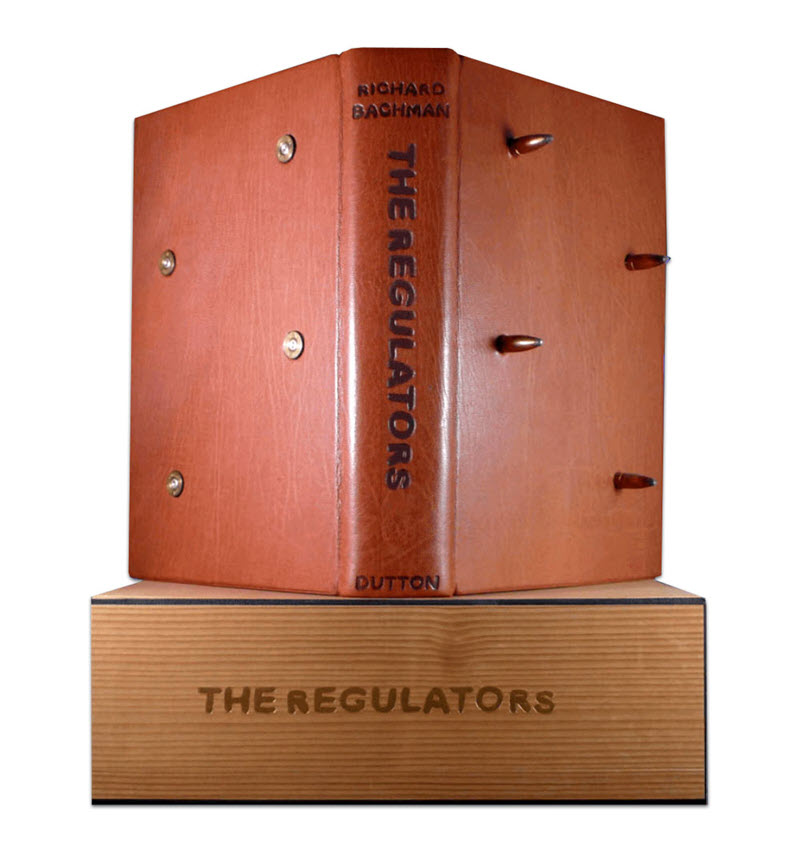 The lettered edition: 52 books with bullets protruding from the front cover, housed in a wooden box. 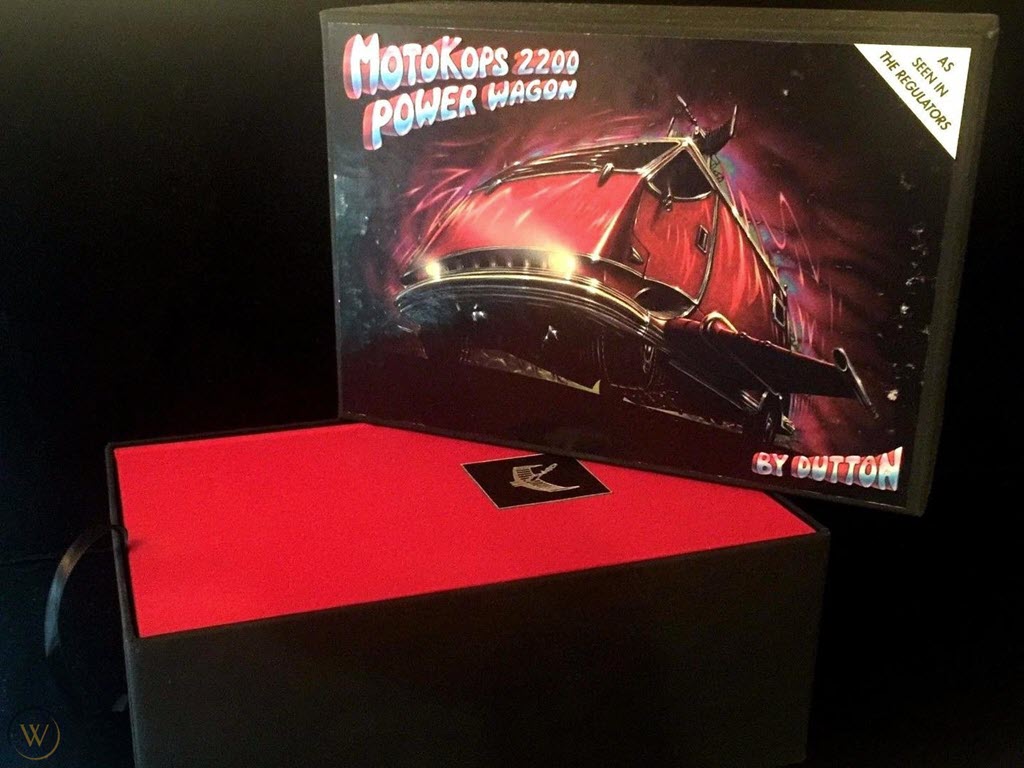 The numbered edition: 500 books in what appears to be a box for a toy, the Motokops 2200 Power Wagon, with a flag in the corner that it is “as seen in The Regulators.”

Late in the process, King objected when it was time to sign the limited editions. Richard Bachman is the author of The Regulators, he said, and Bachman is dead. How can he sign books?

The designer, Joe Stefko, had an idea. After the death of Philip K. Dick, publishers had wanted to produce signed limited editions of some of his books. Since he wasn’t around, they obtained cancelled checks from his estate and cut out the signatures and glued them into the books. Stefko showed a PKD book with a cancelled check signature to Stephen King.

There is so much creativity at work that the limited edition of The Regulators has a magical significance in the community of King collectors. It’s not the most valuable King collectible – oh, no, heavens no, oh that rabbit hole is so deep, you have no idea! It’s not the most beautiful King release. Some of them are works of art. The lettered Suntup Misery, stands out, for example, with embedded typewriter keys in the cover and housed in a wooden Remington typewriter box.

But the Motokops box and Bachman check are so fun and so distinctive that they are highly sought after by King aficionados. Not to mention that it is one of the only times King signed anything as Bachman.

The payees are a rich collection of King-related names. The first one is made out to “Carrie White,” with the memo “Prom dress.” There’s a check to Danny Torrance (from The Shining) for “Tour through topiary.” If you remember the book It, then you’ll appreciate the check to Pennywise Party Entertainment for “Balloons for Claudia.”

There are a few checks to payees in the real world. One check is made out to Phantasia Press for “Asbestos Firestarter.” There is a check to Harlan Ellison for famous unpublished book “Last Dangerous Visions.” A check to Shirley Jackson for “2 nights stay in Hill House.”

I finally got a copy of the limited edition of The Regulators last year. This is the Bachman check in my copy.

Check number 369 is made out to Startling Mystery Stories for “copy of Glass Floor.”

I embarked on a quest for the matching issue of the magazine and finally found it last week. I have these two items in my collection now. 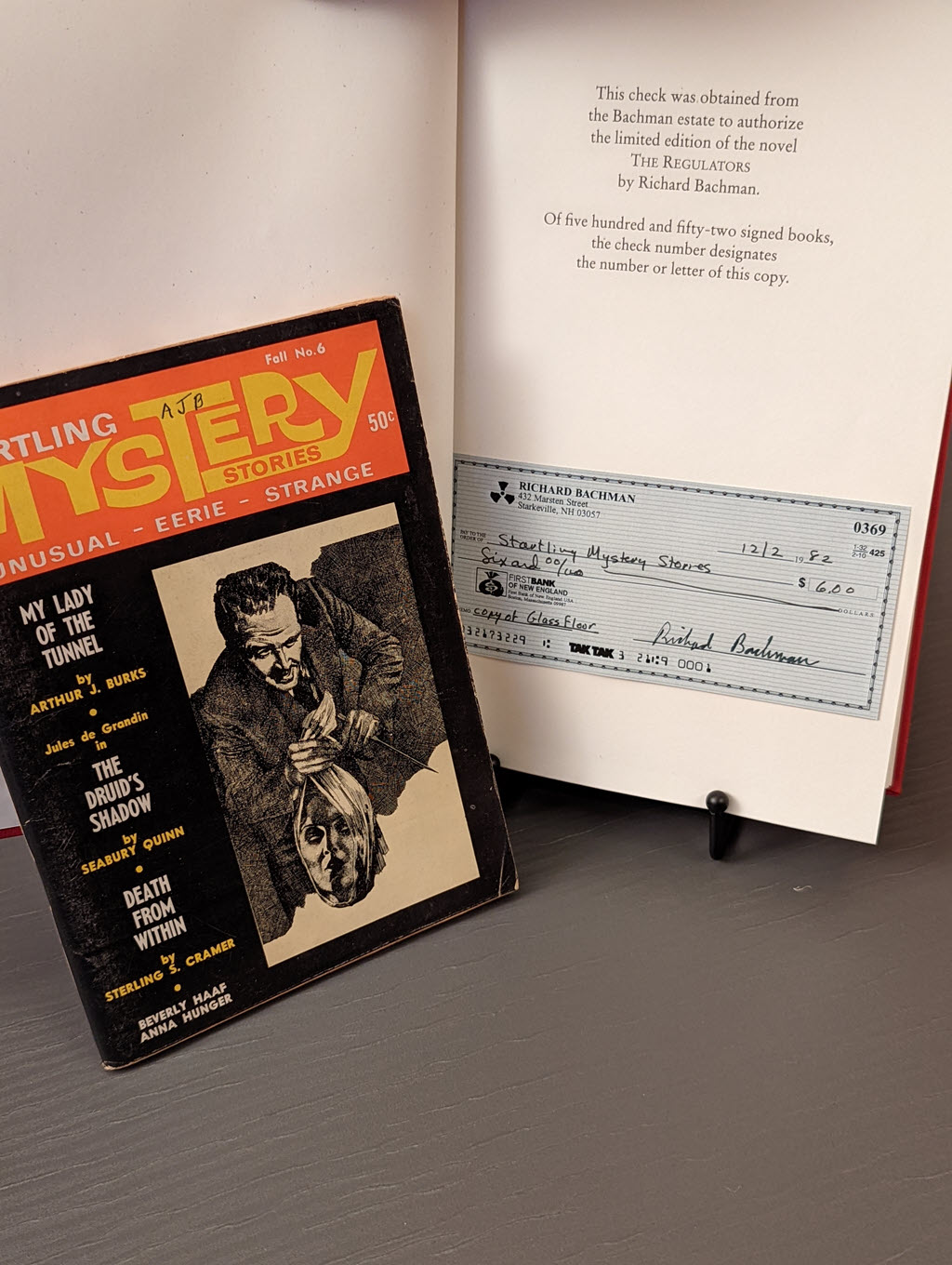 The idea of matching the Bachman check to an item in the real world has no significance to anyone except another King collector. I like the idea of combining two rare King collectibles to make something unique. Lots of people said nice things in the Facebook Stephen King Rare Editions group, so I got my dopamine kick.

Book collecting is a gentle madness. You don’t have to share my excitement about finding this grail. But I hope you have your own grail, that you find the patience and enthusiasm to pursue it, and that you are able someday to achieve your goal. It’s a lovely feeling.