A Singular Road To Augmented Reality 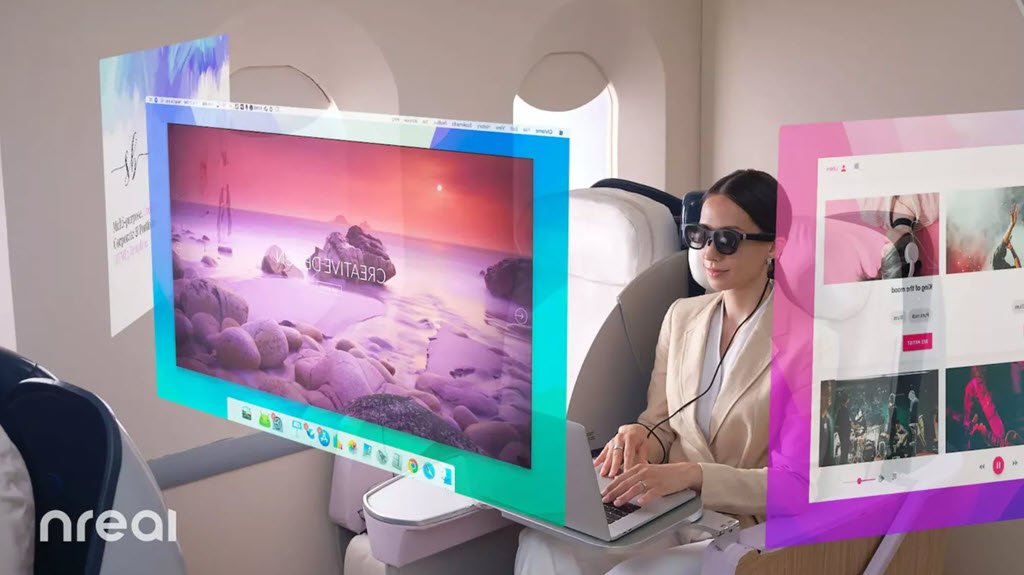 Well, that’s the vision, so to speak. Don’t take my word for it. That’s what Tim Cook thinks, and I hear he’s pretty well informed.

It’s not going to happen very soon. A lot of devices will come and go during the next ten years, a lot of hype, a lot of competing claims about the future, a lot of failures. The road will have many bumps and curves.

As we talk about specific things that are here now or coming soon, it will be up to you to remember the destination: augmented reality glasses will replace your mobile phone.

Virtual reality will never be mainstream. It is a side road that does not lead to our destination.

You will hear quite a lot about VR because at the moment it is technically possible to deliver a good VR experience for the relatively small number of people who are interested. Meta/Facebook will release an upgraded VR headset and improve its terrible metaverse environment Horizon Worlds. Sony will promote its upgraded Playstation VR headset. Apple’s AR/VR product will draw attention to virtual reality next year.

Don’t worry about virtual reality. Enjoy it – it’s fun! – but it doesn’t tell you much about where we’re going.

Instead, I want you to focus on a category of upcoming devices that lead directly to an augmented reality future: AR glasses that have a single purpose.

Let’s go back in time. In the early 2000s, you might have carried an iPod to listen to music; a phone to talk or text; and a computer to browse the Internet. Each was more or less a single purpose device.

The mobile device revolution was already in progress at that point but it was not well understood until Steve Jobs famously came onstage in 2007 and announced the original iPhone.

Today we’re introducing three revolutionary products of this class. The first one is a widescreen iPod with touch controls. The second is a revolutionary mobile phone. And the third is a breakthrough Internet communications device. An iPod, a phone, and an Internet communicator … are you getting it? These are not three separate devices, this is one device, and we are calling it iPhone.

The augmented reality revolution is going to start with single purpose AR glasses. Then over the next ten years Apple, Meta, and other companies will jockey to combine everything into a single set of glasses that do everything, trying to repeat the success Apple had with the iPhone and rule the universe. That’s the destination.

Single purpose devices have several advantages. They are (1) affordable, (2) technically possible to accomplish without difficult breakthroughs, and (3) easy to understand. That last one is key. Each one of these will cause you to say, oh, I get it. That overcomes a huge hurdle.

I’m going to describe three single purpose devices that are either currently available or likely to become available in the next year or two.

One: AR glasses that do translation

At a tech conference in May, Google showed off glasses that do live on-the-fly language translation, displaying text that you can read while someone speaks to you in a different language.

If you didn’t read my article, then take the time to watch two minutes of Sundar Pichai’s keynote where he shows off the glasses being developed in Google’s labs. The idea is that someone can speak in a foreign language and the translation will appear in your line of sight while you maintain eye contact with the person speaking.

There may be shortcomings at first. Maybe they’ll have to be tethered to a nearby phone. Maybe they’ll only work well with speech that is slow and well articulated. Maybe the battery will die after an hour.

But you can immediately see why you would want a pair of glasses like that before your next trip out of the country. If Google starts marketing glasses for translations, everyone will immediately understand more than they did about augmented reality, even if they don’t realize it. 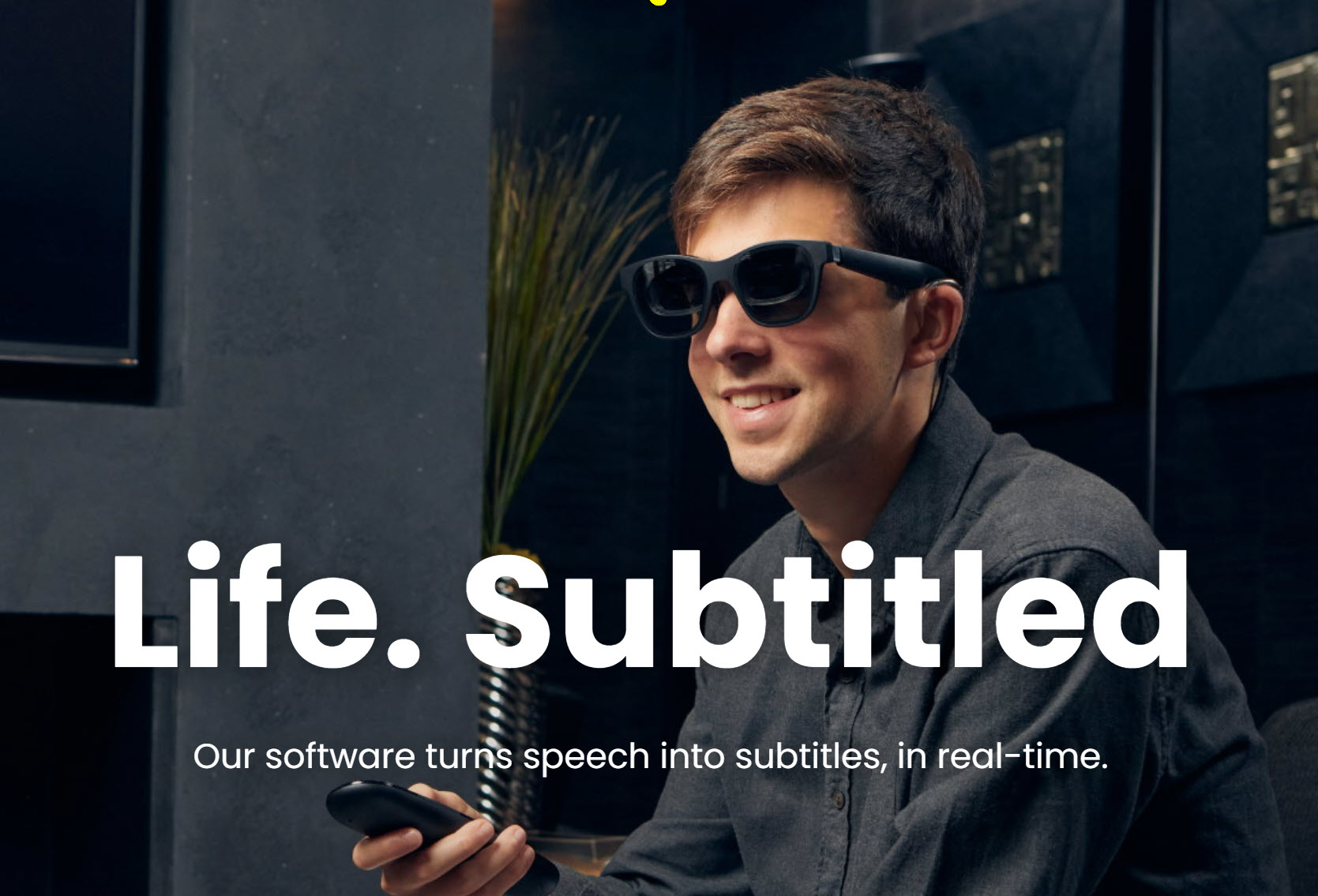 Two: AR glasses that transcribe conversations for people who are deaf or hearing-impaired

Technology for people with hearing loss is advancing rapidly. Hearing aids today do far more than amplify sound. We are near the point where the tech will follow the direction of your eyes and enhance the words spoken by the person we’re looking at, while dropping out other sounds. What a joy that would have been for my father during the years when he could not pick out one person’s words from surrounding noise!

The XRAI Glass software converts audio into a subtitled version of conversation which will then appear on the glasses screen. The software’s sophisticated voice recognition capabilities can identify who’s speaking and the company noted that it will soon have the power to translate languages, voice tones, accents, and pitch.

If you suffer from hearing loss, this is immediately appealing. It’s obvious and intuitive.

There is an interesting generational shift right now: more people than you realize are watching movie and TV with subtitles always turned on. Workers in Zoom meetings are using live subtitles constantly. It’s becoming an expectation. Here’s a survey with some amazing statistics about people watching TV and movies: 50% of respondents said they use subtitles most of the time. 70% of Gen Z respondents said they use subtitles, followed by 53% of millennials, 38% of Gen X, and 35% of baby boomers. (Possible reasons: more people are watching media in public, or want to be able to catch up easily because they are simultaneously doing other things on their devices besides watching.)

Glasses to subtitle the world may be appealing to a far larger group than just the hearing impaired population. 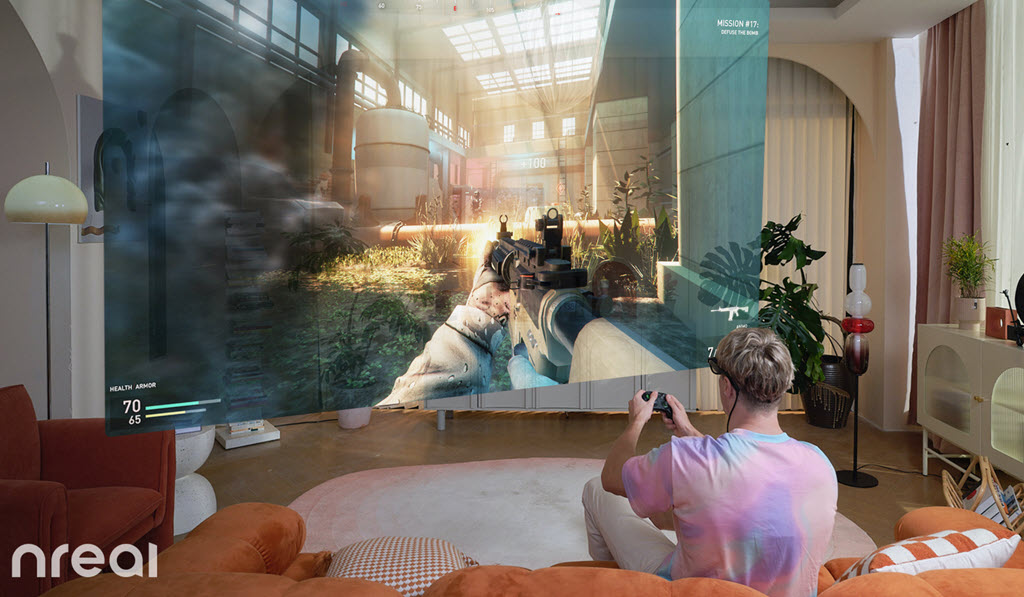 NReal Air augmented reality glasses have been available in Europe since May and have just begun shipping in the US. You can buy them today from Amazon.

They do one thing and only one thing: they project a large virtual screen in front of your face.

The glasses are clear. You can still see the rest of the world. But it appears that you have a screen hanging in the air that is the size of a 200 inch TV viewed from across the room.

They’re inexpensive, less than $400. The display is bright and crisp. There are decent small speakers close to your ears in the stems. The glasses are tethered with a single USB C cable to a nearby device – an Android phone, a Nintendo Switch or Steam Deck for gaming, or a PC. (There are lots of things to learn about compatibility so do lots of research if you’re interested. At the moment iPhones are only supported with a bulky extra-cost adapter, and only Apple’s latest M2-equipped Macs can run NReal’s Nebula software, although the screen can be mirrored from any Mac or PC.)

This is a new concept so you’re not sure what role it plays. Some easy examples:

You’re sitting on an airplane. Instead of trying to prop your iPad up in the few inches between you and the seatback in front of you, you connect the glasses. Now you can watch that movie on what appears to be the size of a movie screen. You can still see the edges of the seat and the drink on your tray, but the monitor appears to be a comfortable distance away.

You’re lying in bed. You plug in your glasses and the screen is floating above you, exactly where your eyes are looking with your head flat – no need to hold the iPad over your head until you get drowsy and drop it onto your nose.

You’re watching a movie by yourself at home. Turn the lights down, put on the glasses, and watch it on a screen that appears to be twice or three times the size of your TV. Why not?

You’re working at a coffee house. You plug the glasses into your M2 Macbook Air and you see two or three monitors, like 27” monitors on a desk – but you can still see your hands on the keyboard and trackpad. The picture at the top of this article is NReal’s promotional rendition of that experience.

Three examples of AR glasses. At worst in the next few years, you would need three different pairs of glasses to get those benefits. It will take a while for everything to come together in one pair of glasses that does many things.

It will happen. The race is on between Apple, Meta/Facebook, Google, Amazon, Magic Leap, Arrgle, and others.

In a few years we will have a single pair of glasses that we carry with us as readily as we carry a phone today. Until then, we have some exciting technology that will give us glimpses of that future – and perhaps some exciting experiences along the way.