When Microsoft realized that it was on the verge of missing the implications of the Internet, it famously turned the company around in the mid-90s, building web access into all of its products and working out the implications of online access more thoroughly than anyone else.

The turnaround that Microsoft is engaged in this year might be even more impressive. It is straightening out its product brands, giving virtually everything a consistent design, and adapting to a world where mobile devices and multiple form factors are replacing traditional desktop computers.

This week’s announcement potentially carries as much weight as Microsoft’s other 2012 blockbusters – the radical reinvention of Windows and Office, the Surface tablet, the revamped server lineup and more.

Hotmail is being replaced with a new webmail service called Outlook.com. It is not an update to Hotmail but a completely new, designed-from-the-ground-up service, featuring a modern design that is consistent with Microsoft’s overall efforts: simple, flat (no 3D effects), lots of white space, straight lines (no rounded corners). 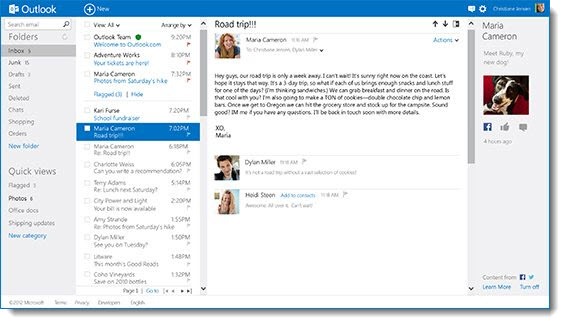 You can get a free Outlook.com address (or convert a Hotmail address) at www.outlook.com. (There is currently a glitch that might make it hard for Office 365 subscribers to sign up.) Hotmail users can continue to use the existing Hotmail interface but it’s likely that Hotmail will be switched to this new design eventually.

The design is strikingly similar to the desktop version of Outlook in the next version of Office, but that’s not all. It’s also similar to the design of the Exchange-based Outlook Web App seen by Office 365 subscribers, as well as the Mail app in Windows 8. That’s part of the point. Microsoft is finally waking up to the value of consistency.

It’s also showing a greater awareness of branding. The Hotmail name is hopelessly tarnished. People associate Outlook with mail in a (mostly) positive way. Outlook.com (and all other Microsoft services going forward) is built on a “Microsoft Account”; the company is engaged in purging the unloved name “Windows Live ID.”

The new service is loaded with features, and the clean design helps make it easier to find those features. Everything is forward-looking!

An example of thoughtful design: If you create an email message and attach a group of photos, Outlook.com will offer to upload the photos to Skydrive and send the message with thumbnail previews, which the recipient can click on to download the full-size originals. The same thing will happen with any large file attachment, making attachment file size limits a thing of the past. 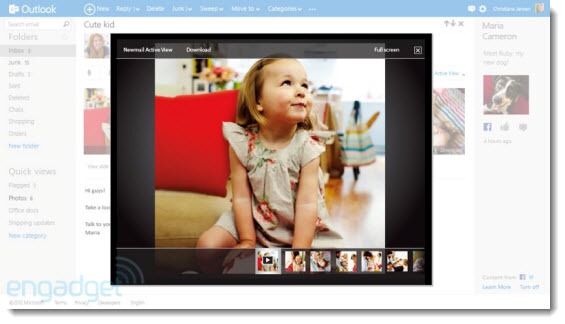 Most Gmail users become used to its peculiar, unattractive interface, and of course many people are committed to staying in Google’s walled garden. For everyone else, Outlook.com jumps to the top of the list for free and easy webmail. There are virtually no differences in features between Outlook.com and Gmail, and Microsoft’s new service has a far more appealing look.

Here is the official Microsoft announcement of Outlook.com. If you need a disposable address, Microsoft now has a viable alternative to a Gmail address – and Outlook.com deserves consideration as a permanent replacement for anyone stuck with an ISP address (@sbcglobal.net, @comcast.net and the rest). If you’re ready to move on from your current email address, take a look!