Why Windows 10 Won’t Connect To The Internet (Another Day, Another Microsoft Update Disaster) 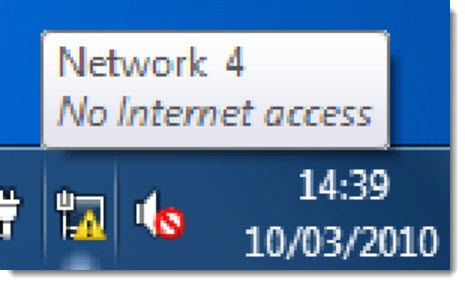 If your computer won’t connect to the Internet, you might have run into a new Windows bug. It’s got all the classic symptoms of Microsoft bugs.

•  It’s affecting a large number of people but we don’t know how many. Microsoft has posted an extraordinary banner on its support pages, which suggests it might be a widespread problem. (See below.) I’ve run into it twice in the last few days. There are lively conversations in forums and support sites full of people complaining about it.

•  It either is or isn’t the result of a recent update to Windows 10. The most frequent reports are from people running Windows 10 version 1607 (with the Anniversary Update that most people have now gotten), but there are similar reports from people running different versions of Windows 10, with and without the recent updates that are under suspicion. Reports started coming in around December 8, during a week when there were no updates released for Windows 10.

I’ll describe the symptoms and give you the best information available today about steps that might fix the problem. This might be fixed in a few days or people might still be searching for this page six months from now. Who knows? We’re all playing Microsoft roulette these days.

This is a problem with DHCP – the service that assigns a unique IP address to your computer’s network adapter. Your computer might appear to connect to wi-fi but display the message in the top picture, “No Internet access.” Or there might be a lengthy delay while the message says, “Identifying,” followed by the same failure to provide an Internet connection.

If you can’t get your Internet connection to work, you can find out if you have a DHCP problem this way. (These are general instructions that will fit most people. Networking is complicated and your setup might be different, so get help if you’re not sure if this applies to you.) 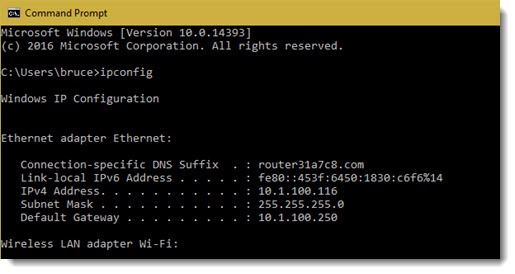 Type in ipconfig and hit Enter.

Look at the line near the top that says “IPv4 Address.”

A few days ago, the above message appeared at the top of every single Microsoft support page. “If you are experiencing issues connecting to the Internet we recommend you restart your PC by going to Start, clicking the Power button, then choosing Restart (not Shut down).”

This is unprecedented. I can’t remember Microsoft ever doing anything like this before.

We have no proof that this is related to the DHCP problem but there is nothing else happening that would justify such an odd bit of very prominent advice. (Although if you can’t get online, it’s rather difficult to see advice on Microsoft’s website, but let’s not quibble.)

The first solution, then, is to do a full Restart from the Start menu. Microsoft’s goal is apparently to bypass the Fast Startup procedures in Windows 10 and give the network adapter a fresh look at the DHCP server.

Try these tips as alternatives, if a restart from the Start menu doesn’t work.

Try this sequence to completely reset many components of the computer network adapters.

Type in these commands. Hit Enter after each one.

After you’ve run those commands, restart the computer. With luck you’ll be back up and running.

As always, the Intertubes are full of people suggesting other fixes. Proceed with caution. Most of them are not, shall we say, fully informed.

This is just starting to bubble to the surface of the tech hive-mind. Woody Leonhardt is covering it closely, first in an article last week for InfoWorld, then in a more comprehensive follow-up on his own site. Neowin picked up on it today and optimistically hopes that a Windows 10 update this week might have fixed it. It’s not clear yet if that’s true.

There has been much speculation about specific recent updates that might have caused this problem but each suggestion has drawn responses that apparently disprove it. Perhaps Microsoft has this one figured out and has released the fix – but where did it come from? And why is that banner still at the top of the Microsoft support pages? What triggered it in the middle of a week with no changes to Windows 10?

And the ultimate question: what has happened to Microsoft’s quality control for updates to Windows? This is only the latest in a long line of failed updates. It will be harder and harder for Microsoft to regain our trust if things like this keep happening.