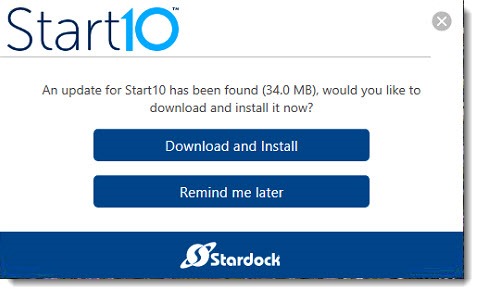 If your Windows 10 computer displays an update notice for a new version of Start10, go ahead and install it. It’s safe.

This is your Windows 10 Start menu with Start10. 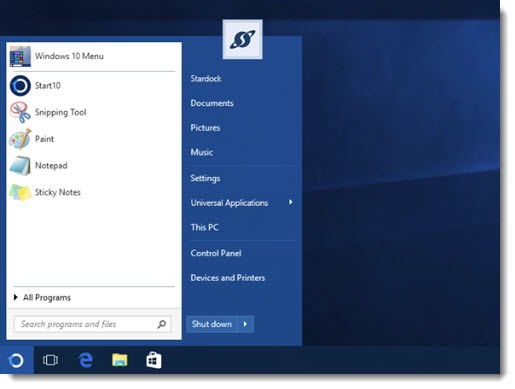 Start10 is a five dollar program from Stardock Software that replaces the Windows 10 Start menu with a start menu that looks exactly like Windows 7. The Start10 default menu is shown in the above screenshot. Looks familiar, doesn’t it? That’s the point.

I install Start10 on every Windows 10 computer that I set up. I used to ask permission. Now I just install it. It’s an important item on my checklist for configuring Windows 10 on new computers. Everyone loves Start10. If you’re running Windows 10 and you don’t have Start10, I highly recommend buying it from Stardock. 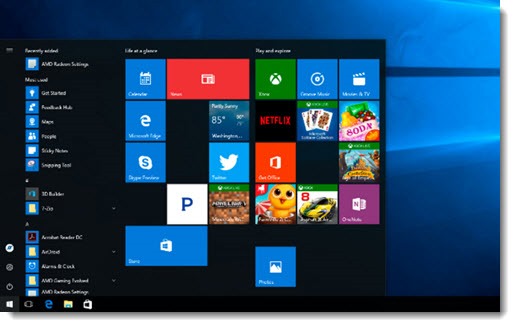 Sharp eyes will notice the tile for Candy Crush Saga. Yeah, I’ll bet you’ve been giving that a workout. How about Age of Empires: Castle Siege? Raise your hands if you’ve reached for that tile lately. No? Farmville? Asphalt 8: Airborne? Anyone? No, I didn’t think so.

Microsoft introduced the tiles in Windows 8. People hated the tiles. They were an important part of the reason that Microsoft’s reputation began to slide and Windows 8 became one of the most disastrous operating system releases in history. Microsoft couldn’t give up on the tiles, so it decided that it could win hearts if it just made the tiles take up less space onscreen in Windows 10. When Microsoft previewed Windows 10 and showed the new Start menu in a slide onscreen, I quite literally thought it was a joke that would be followed by the real menu. Alas, it wasn’t a joke. It was Microsoft’s best effort.

Here are two things that are both true.

•  The Windows 10 Start menu can be customized within an inch of its life. The entire pane of tiles can be hidden. Tiles can be turned off or made bigger or smaller. They can be rearranged and grouped. A tile can be added for any program. You can expand or contact the pane. The tiles can be whatever helps you be happy and productive.

•  Never – not once – have I ever seen anyone customize their Start menu. I have worked with hundreds of normal non-technical people on their Windows 10 computers. Normal people don’t customize Windows features. Sorry, Microsoft, they just don’t. Instead, the tiles are ignored.*

( *This is, of course, an overstatement. One of my clients customizes the Start menu on all her computers. She’s the only one, but still, I shouldn’t exaggerate. I’ve probably said that a million times.)

When it launched Windows 10, Microsoft did not provide an easy way for users to revert to a familiar looking Windows 7-style Start menu. It was a continuation of the hubris that led Microsoft to think that it could impose a new look on Windows 8 that no one had asked for and force people to like it. Apple has done that – and gotten away with it – repeatedly. It didn’t work for Microsoft with Windows 8. There are fewer complaints about the Start menu in Windows 10 but I think it has contributed to people’s low-level irritability at Windows and Microsoft.

Enter Stardock. Stardock is a software developer that stepped in with Start8 for Windows 8 and made a mint from frustrated users. It has continued with Start10 for Windows 10. The Stardock programs are the best of the Start menu replacements – elegant, simple, and cheap.

Start10 is installed on the Windows 10 computers for almost all my clients. I can’t update it automatically with the Bruceb Remote Management service. It’s up to you.

If you see the update notice shown above, download and install the update. It only takes a minute. You’ll be asked to restart your computer when it’s done.

Think kind thoughts about Start10 when you click on the Start button and get a simple and familiar menu. It’s your friend.