The Amazon Ecosystem: The Company That Wants To Sell Everything To Everyone 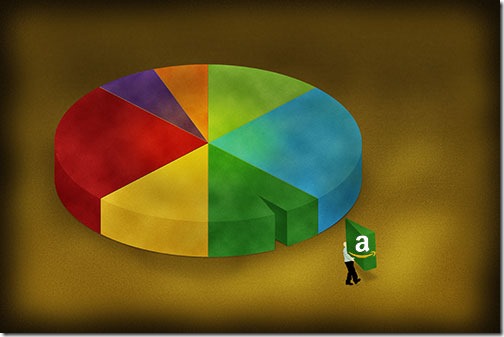 Amazon seeks to be the middleman in every financial transaction on the planet. Its incentives are all tied to making customers happy in every context where Amazon can take a small fee as money moves from one place to another.

Since the beginning, Amazon’s mission statement has been: “Our vision is to be Earth’s most customer-centric company; to build a place where people can come to find and discover anything they might want to buy online.” In the most recent SEC filings, however, that is shortened; now it refers only to “Earth’s most customer-centric company,” without restricting it to sales from the Amazon website. Amazon’s vision covers so much more than online shopping! Sure, we’re Amazon customers when we order online, but Amazon’s customers are also Fortune 500 companies that use Amazon servers to run their businesses, third party sellers that rely on Amazon to handle sales and fulfillment, and oh so much more.

Focus on the word “middleman.” It’s the best way to understand Amazon’s ambitions and the scope of its ecosystem. I’m going to describe a number of specific parts of Amazon’s business; the common thread is that Amazon is positioning itself to collect a payment in a wide variety of transactions, in exchange for providing some useful service during the transaction. Zoom out and let’s get an overview of Amazon’s businesses: books and video; shopping; home assistants; Amazon Web Services; groceries; and Amazon’s possible future in pharmaceuticals, health care, financial services, and delivery services.

Books & video  For many of us, our first exposure to Amazon’s ecosystem came when it released the Kindle and took control of e-book sales. Despite valiant and continuing efforts by competitors, almost no one considers buying an e-book from anyone besides Amazon. Once you have purchased a few e-books, you are firmly locked into the Amazon book ecosystem. Apple fought with publishers to raise book prices as a way to dislodge Amazon from its controlling position (paradoxical but true); Barnes & Noble still clings to a miniscule position for the Nook e-reader; and Google sells its own proprietary e-books in the Play Store. You can buy books from Microsoft that can only be read in the Edge browser. (Seriously. Who would do that?)

Amazon is now locked in a pitched battle with Netflix for original video content. The two companies have much different motivations. Netflix builds its business on your willingness to pay money for its content. Amazon makes nothing directly on its original content; the only reason it makes shows is to entice you to buy annual Amazon Prime subscriptions, because you will then be more likely to shop on Amazon for everything besides video. And once you’re browsing Amazon’s original content, you might decide to stream from Amazon’s large pay-to-play video library, building Amazon’s reputation as the place to turn for simply everything.

Shopping  That brings us to sales on the Amazon website. This is the conventional understanding of Amazon’s ecosystem: our loyalty to Amazon’s brand for shopping, which in some ways is even stronger than the loyalty that Apple users have to the Apple brand. Think of it this way:

•  When we search for answers online, we use Google as the search engine. It never occurs to us to use anything else. Without realizing it, though, you have carved out an important exception.

•  When we search for something to buy, most people use Amazon as the search engine. We search Amazon, and only Amazon. We trust its low prices, wide selection, fast shipping, and generous return policies. Google is your search engine for a lot of things but Amazon is your search engine when you’re shopping. That is a profound change in our habits in the last ten years and it has powered Amazon’s explosive growth in retail sales.

Amazon Prime is the genius stroke that cements our loyalty to Amazon online shopping. We pay for it readily because we believe – with good reason – that we are getting great value from it: free shipping, streaming video, and Amazon’s well-deserved reputation for reliability and customer support. Once we buy a Prime membership, we work hard to convince ourselves that we are maximizing the benefits of the membership. Amazon Prime members spend almost twice as much per year at Amazon as non-members.

But this is where Amazon’s ecosystem begins to look a bit different than you expect. Amazon is increasingly only a middleman for third party sellers. Amazon takes a percentage of sales in exchange for handling the website, taking care of the invoicing & payment, and serving as the ultimate arbiter for customer support. Some – but not all – businesses also allow Amazon to ship items from Amazon warehouses – more than two billion items in 2016 shipped on behalf of third parties. Frequently, though, boxes are arriving that clearly have never gone through Amazon’s hands, shipped by small businesses in Vermont or, for that matter, shipped directly from huge retailers like Target, which seems strange. For the last couple of years, more than half of the units sold through Amazon’s website have been sold by third-party sellers.

Home assistant & smart home  Amazon was first to market with a home assistant, the wildly successful Amazon Echo line. It arranged partnerships with every business that could conceivably interact with the Echo, with three goals: (1) when you buy those smart home devices, the Hue light bulbs and Nest thermostats, you will likely buy them from Amazon; (2) Echos are designed to help you order from Amazon by voice; and (3) you are likely to be locked into whichever line of home assistant you try first; once you have an Echo, you are less likely to buy a Google Home. The jury is out. Google Home sales are catching up to Echo sales, and a recent report claimed that almost no one ever buys anything from their Echo.

Amazon Web Services  An extraordinary number of the world’s governments and large companies have outsourced their computing to Amazon. Amazon Web Services powers far more of the Internet, and the world, than you realize. AWS provides about ten percent of Amazon’s revenue but almost 75% of Amazon’s operating income in the most recent quarter. Microsoft is competing vigorously but Amazon has a strong lead in the market for cloud computing.

The next part is important, because we’re likely to see it happen again.

Amazon originally developed server capacity for its own use to power the Amazon website. In other words, Amazon was its own first customer for cloud computing. Once it had developed the infrastructure, it began to sell its excess capacity to third parties, eventually building up the global AWS service.

Netflix is an AWS customer. Adobe, Ticketmaster, Hertz, General Electric and Harvard Medical School are AWS customers. The US Department of State is an AWS customer. I’m an AWS customer (my clients’ cloud backups are stored there). Amazon provides cloud computing power to all those companies and charges a fee while they get on with their businesses. See how this works?

Groceries  Amazon has barely begun to leverage its purchase of Whole Foods. It is starting with incentives to join Amazon Prime for discounts on groceries, but Amazon will likely step up its efforts with home delivery of groceries, as well as using the Whole Foods stores as mini-fulfillment centers where you can pick up your Amazon orders immediately.

Pharmaceuticals  When Amazon announced that it was buying a small online pharmacy, PillPack, shares of Walgreens, CVS and Rite Aid dropped by 11 billion dollars overnight. PillPack’s business is mailing pharmaceuticals in individually labeled packs sorted by date and time. It is a perfect match to build on Amazon’s reputation for accurate shipping.

But more important, PillPack already has licenses to sell prescription drugs in all fifty states, a time-consuming and difficult process if Amazon was starting from scratch. If Amazon can simplify the process of filling a prescription at the same time as offering cheaper prices, it could transform pharmaceutical sales, a huge and profitable business.

Health care  Amazon is part of a three-way joint venture with JPMorgan Chase and Berkshire Hathaway to create a non-profit health care company. At the outset, Amazon will be its own first customer; the new firm is starting with health care services only for the employees of the three partners, a bit over a million people.

Amazon has not described its plans in detail. One possibility is that Amazon will not attempt to be a health care insurer itself; instead, it could act as a middleman between employees and health care insurance companies, assisting in evaluating electronic medical records, managing pharmacy benefits, selling plans and handling claims – and charging a fee for the service.

Financial services  Amazon already does some things that look a lot like banking and finance, without the burden of being a regulated financial institution. So far those things are focused on products that support increased participation in the Amazon ecosystem. There is much speculation that Amazon may launch into banking and checking accounts for consumers and there are rumors about asset management.

Amazon already runs Amazon Pay for online payments to Amazon and participating merchants. You’ve heard this story before! Amazon is currently the first and best customer for its payment system. It does not take much imagination to see Amazon promoting Amazon Pay more vigorously to compete with Paypal and Square, perhaps with an NFC-enabled phone app to compete with Apple Pay and Google Pay, and perhaps with a person-to-person payment system similar to Venmo. I’m speculating but all of those are consistent with Amazon’s goal of taking a small fee from every financial transaction on the planet.

Delivery service  A few weeks ago Amazon announced a new program offering incentive payments to anyone willing to start an independent delivery business that will take packages from local Amazon sorting centers to customers, driving Amazon branded vans and wearing Amazon uniforms. The next step will be an expansion of the service to pickups from Amazon’s third party sellers. Again, it will be consistent for Amazon to start developing its own delivery business by making itself the first customer – but UPS and FedEx live in constant fear that Amazon will expand that to a generally available Amazon shipping service, relegating the other services to leftovers and holiday overflow.

Amazon’s ecosystem is broader in scope and a bit harder to pin down than the walled gardens run by Apple and Google. Amazon says it is customer-centric. At some level every person, business, and government in the world is a “customer.” Amazon intends to serve all of them, and with luck, take a fee out of every transaction among them. It’s an impressive vision.