How An Internet Mob Almost Bought The US Constitution 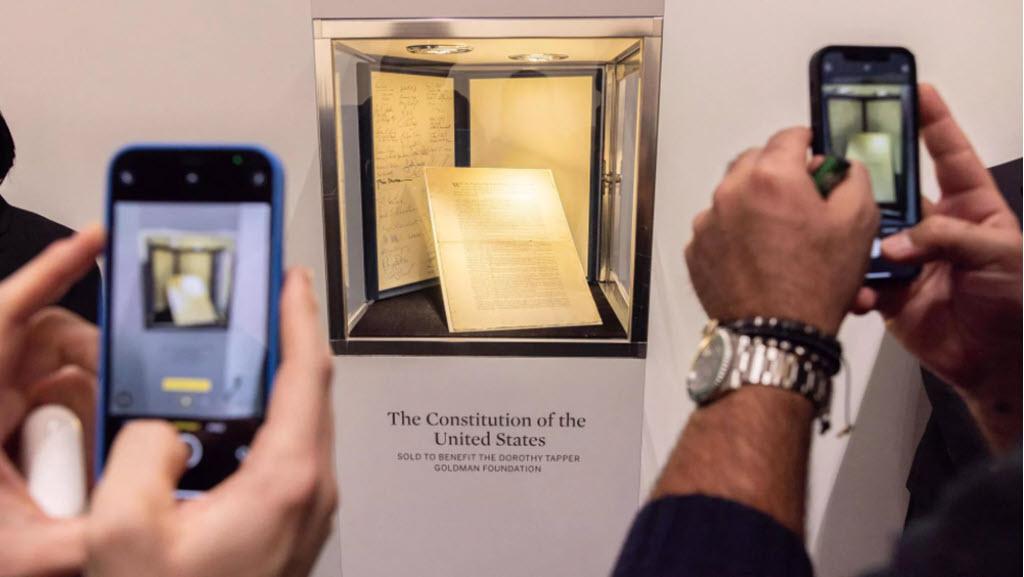 The failed attempt by an Internet mob to buy the US Constitution might be my favorite story of the year. It’s a revenge story! It’s loaded with crypto weirdness! It features thousands of people banding together for giggles! It’s got ties to conspiracy theories and Gamestop madness! The villain is played by an ultra-rich white guy who apparently spent $43 million because some people made fun of him online. And it prominently features Nicolas Cage. How great is that? It’s the perfect illustration of so many things that make the world profoundly silly in 2021.

Nothing bad happens in this story. Decent people spent money to accomplish something good and honorable. But at each step, if you look closely, there is something very stupid going on.

The story begins in 1787. Five hundred copies of the US Constitution were printed after the Constitutional Convention. Thirteen copies exist today. Only one of them is in private hands, bought in 1988 by a real estate developer and rare document collector.

In September Sotheby’s announced that the privately held copy of the Constitution would be sold on November 19 at auction, with proceeds to benefit a foundation founded by the developer’s widow.

The Tao Of DAO 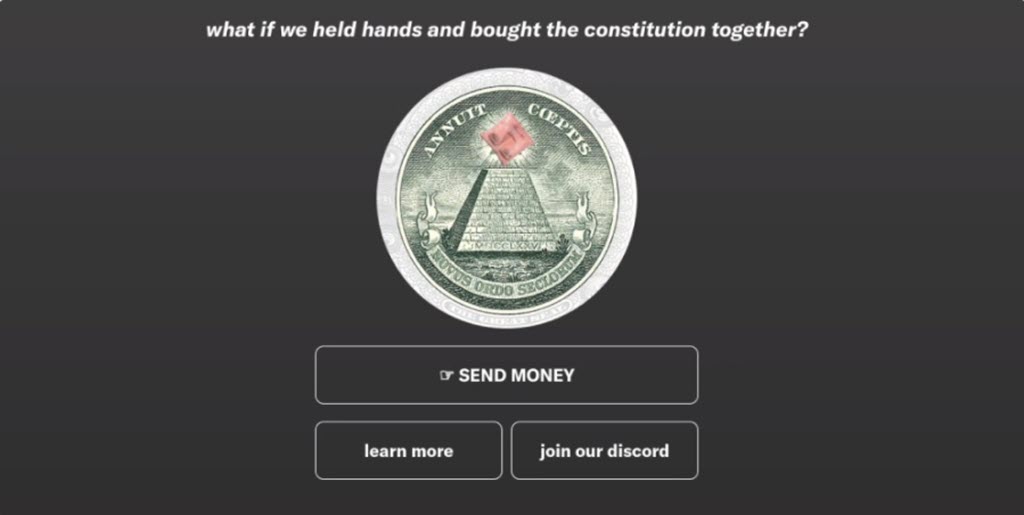 On Thursday November 11, a small group of rich people decided to change the world. In their view, the time is ripe for the world to have a lot more Internet mobs using strange poorly defined crypto mechanisms with lots of acronyms to “collectively own everything from historical artifacts to art to real estate to physical collectibles.”

In their eyes, what the world needs to lead us to that bright future is a glorious crypto adventure that is so overwhelming, so charming, and so goofy that the world takes notice and reorganizes the entire financial system around spontaneous on-the-fly cool crypto clubs.

Enter the possibility of buying the US Constitution. Perfect!

They had seven days to raise an estimated twenty million dollars from scratch.

Contributions would be made by people mashing on buttons for things that not a single human being would fully understand. Trust me about that. Here, I’ll give you some acronyms and jargon: Web3, DAO, NFT, ETH, gas fees, Ethereum, PEOPLE tokens. Write any of those terms in any order with some connecting words. What you write will be exactly as sensible as anything written by the people who claim to know what they’re doing.

No one would contribute cash. Filthy lucre! Perish the thought. No, everyone would buy a cryptocurrency named “Ethereum” that is notoriously arcane and expensive. But it wouldn’t stop there! Then they would convert the Ethereum into another imaginary currency invented specifically for this project.

That night the core group formed ConstitutionDAO and launched a Twitter page. Over the weekend they set up a Discord server. (More about Discord another time. It’s a hip new way to chat online, especially popular with crypto kids.) They set up a website. One of them wrote a manifesto about how incredibly neato keen this is. From the manifesto: “Web3 isn’t a panacea, but its primitives, like NFTs, tokens, and DAOs, give us new ways of collaborating and distributing ownership.” Clear and convincing!

Now here’s the part where the world drifts completely out of focus.

The web page for contributions went live on Sunday.

Within a day, it had raised three million dollars.

By Tuesday it was up to five million dollars.

And on Wednesday and Thursday, the world went completely off the rails. By the day of the auction, the group had raised $47 million from more than 17,000 contributors – a new record for the largest amount of money raised in 72 hours. A few people contributed large amounts, some over a million dollars, but the vast majority of people made small contributions, two or three hundred dollars.

Why did people contribute all that money?

They didn’t contribute because it made any financial sense. Not a single thing about cryptocurrency makes financial sense by any traditional measure.

People contributed because they thought it would be funny to be part of an Internet adventure.

This is the central story of finance in 2021. The Reddit mob that manipulated Gamestop stock prices weren’t doing it based on sophisticated market analysis. When you see the stock of AMC Entertainment bouncing up and down like a yo-yo, it’s because online mobs are playing with it. There is a whole new world of “meme stocks” with cult-like followings that are hyped or derided on Reddit and Facebook and Twitter, sending stock prices into gyrations that have nothing whatsoever to do with the actual company financials.

When you see Elon Musk saying crap on Twitter and sending the price of Tesla stock up or down, or causing cryptocurrency prices to spike and plunge, just because he can and it’s fun – that’s our world in 2021. 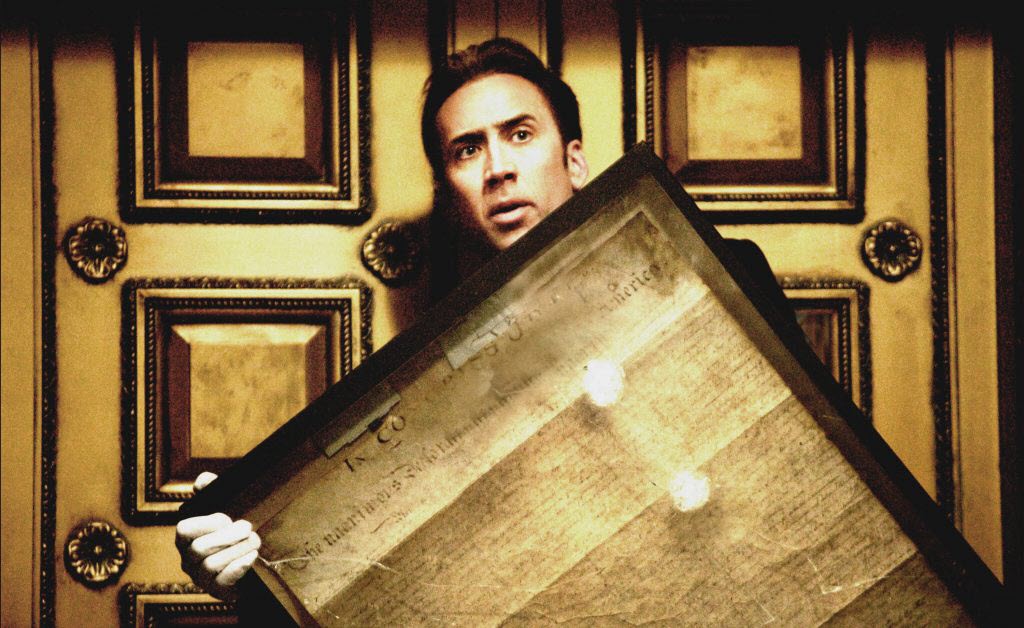 Internet mobs in 2021 are driven by memes – shared bits of art or in-jokes that just leave everyone in the community in stitches at their cleverness.

See, he starred in National Treasure, a movie where his character stole the Declaration of Independence, close enough, right? Plus, it’s Nicolas Cage. For some reason, memes with Nicolas Cage make some people giggle.

Quotes from the ConstitutionDAO manifesto:

“Since ConstitutionDAO needs to raise enough money to buy the Constitution in seven days, memes are crucial to spreading the message far and wide and to creating cohesion. . . . Nic Cage has become the face of this faceless movement. No Nic Cage memes, no Constitution.” (emphasis added)

You might think that’s silly. I think it’s silly. But you and I didn’t raise $47 million a couple of weeks ago and ConstitutionDAO did and they used Nic Cage memes to do it, so who’s the silly one?

The mob didn’t buy the US Constitution

The auction for the Constitution was always going to be a battle between ultra-rich people and well-heeled institutions. If you were going to sit down and write a set of rules for bidding on a coveted item against billionaires, wouldn’t you think this would be the first rule?

Rules to win an auction

1) Do NOT announce your really truly highest possible bid before the auction starts.

Stop and think for ten or fifteen seconds and you will realize that the effort by the mob to buy the Constitution was always going to be a lost cause. This flamboyantly public group would raise an amount of money which  would be capped and known to everyone in the room.

So the ConstitutionDAO group was outbid by a billionaire.

The online mob bid about $40 million. (They raised $47 million but had to reserve a fair amount for auction fees and expenses following the auction if they were successful.)

A billionaire bid $43 million. He could have bid $40 million dollars plus one dollar. He threw in some extra money. Maybe there were some other bidders, or maybe he literally doesn’t give a crap because this amount of money is like pocket change to obscenely wealthy white men.

But this wasn’t just any wealthy white guy! The story gets sillier. This is an obnoxious white guy with a grudge. I’ll tell you about him in the next article. And if you’re lucky, I’ll have space to tell you funny stories about gas fees, in case crypto currency jargon doesn’t seem stupid enough yet.