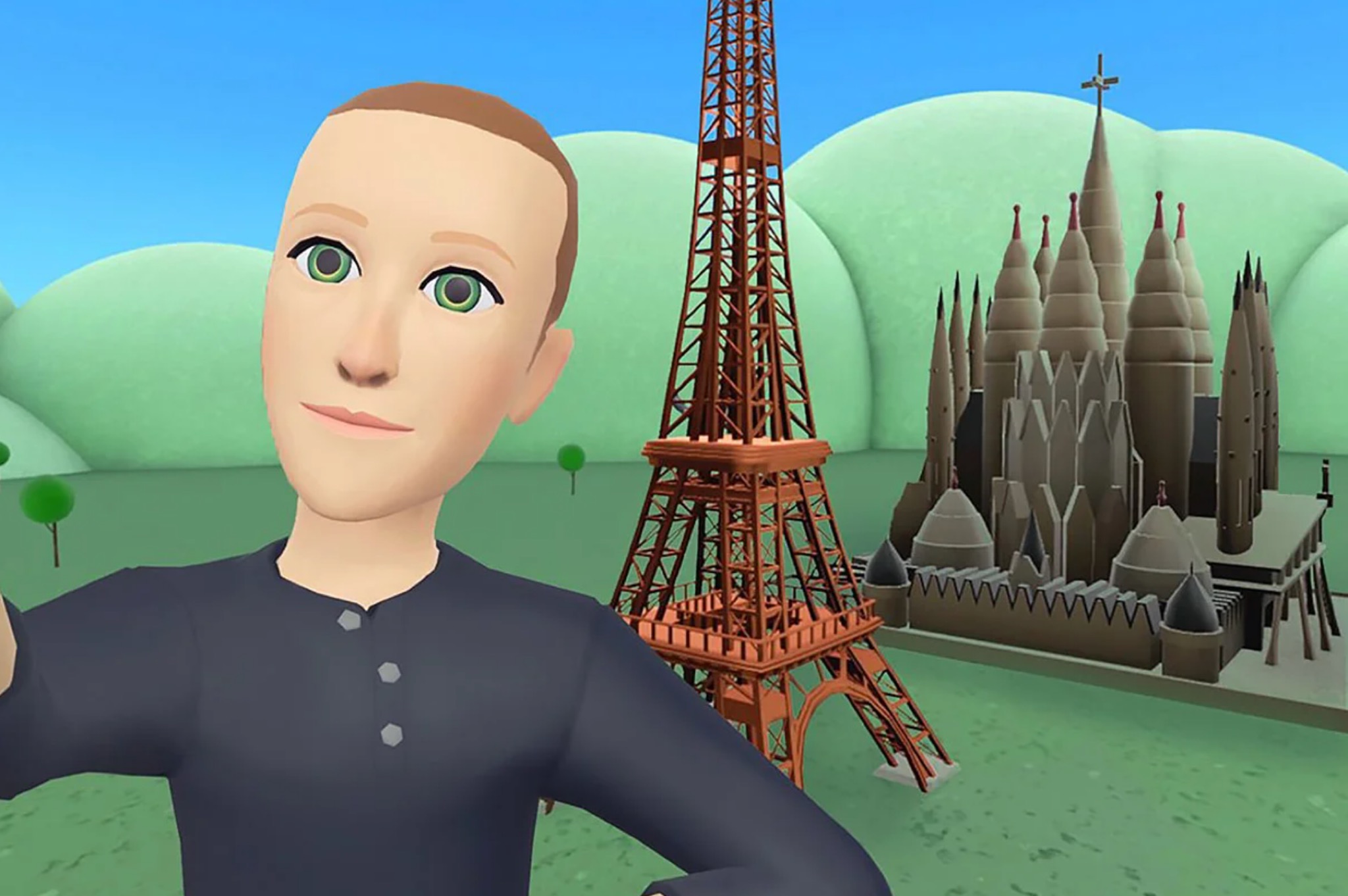 Luxuriate in the awfulness of the above picture. It’s Mark Zuckerberg’s avatar in virtual reality, taking a selfie in front of the Eiffel Tower and it’s hard to be sure, maybe Sagrada Familia in Barcelona? Meta released the picture to promote the release of its VR environment Horizon Worlds in Spain and France.

Within an hour the internet was flooded with memes making fun of it, and Mark Zuckerberg was trying to back away and deflect attention. You have to assume he spent the rest of the day looking in closets for someone to blame.

I’ll tell you more about the picture – the terrible, horrible, no good, very bad picture – but let’s get some background so I can make it seem even worse.

Meta (formerly Facebook) is perceived as the public face of the future of VR. Mark Zuckerberg has done his best to take over VR in the public’s eye. He largely accomplished that in 2022 with the splashy rebranding of the company; the successful effort to turn “metaverse” into a meme for a few months, always with references back to Facebook/Meta; and discouraging (or buying) any company thinking about competing with the Meta Quest 2 low-end VR headset.

Mark Zuckerberg is a smart person. I really believe that! I’ve read many interviews and statements that are more intelligent and nuanced than you would think from the reporting.

But Facebook has a track record of being tone deaf. Of invading privacy in ways that are unforgiveable, verging on evil. Of changing their products arbitrarily and making them worse.

And Mark Zuckerberg is living down to that reputation by being a terrible steward of the future of virtual reality.

Zuckerberg loudly proclaimed that the company would spend ten billion dollars this year on research. And he crowed about Horizon Worlds, a virtual reality environment for Meta Quest 2 owners.

Those two statements look like they would be related to each other. They’re mostly not.

Most of Meta’s research is devoted to future products that will take years to come to fruition. There is a huge amount of work to do before augmented reality can be mainstream – both on hardware and on the AR environment to make the hardware worthwhile. That’s where the money is being spent.

The big bucks are not being spent on virtual reality and specifically not on Horizon Worlds.

But it’s still a problem that Horizon Worlds looks so bad. 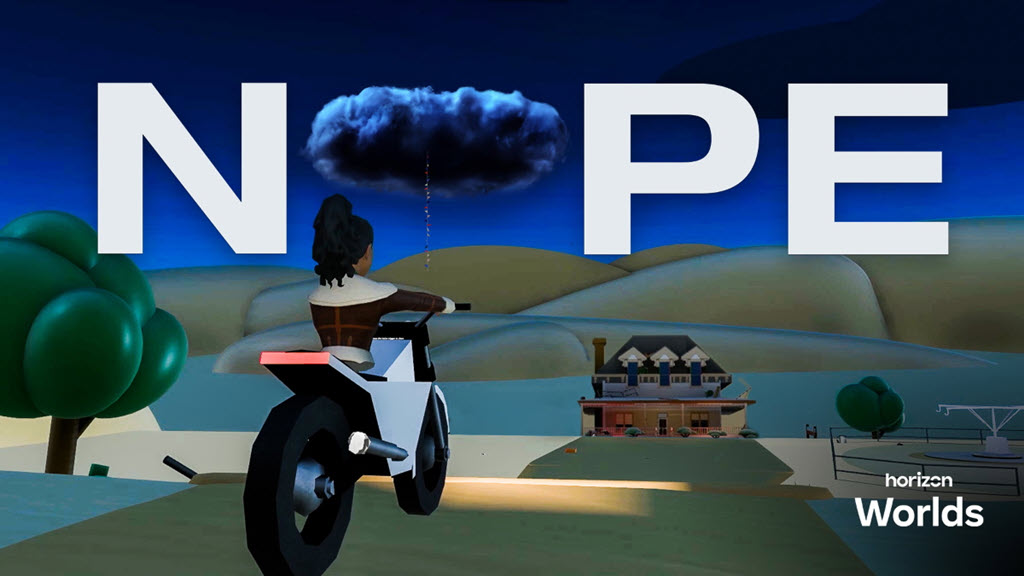 Horizon Worlds’ problems are well known. Avatars in Horizon Worlds have simple cartoony features and no body below the waist. Graphics are blocky. Landscapes are bare. The tools for developers simply don’t allow them to do anything better.

Above is a promotional screenshot for a Horizon Worlds environment created to hype the new Jordan Peele movie Nope. It’s notable for two reasons: (1) The visual pun is irresistible. The correct answer if you’re ever tempted by Horizon Worlds is “NOPE.” (2) That screenshot fairly represents what it looks like. You can double-check – watch the one minute promotional video, or a short tour by a random Youtuber. It really is that bad.

That’s interesting because movie studios aren’t run on a shoestring. Promotions tend to be built by PR agencies with big budgets. It seems likely that Horizon Worlds simply cannot look any better than that.

As many other people have said, Horizon Worlds looks like it’s twenty years old, with blocky graphics like an old 8-bit game on Nintendo or NES.

Some of the degraded experience on Horizon Worlds is the result of hardware limitations. It takes a lot of processing power and bandwidth to represent large groups of people in real time who are all moving around and talking.

That’s not really an excuse for how awful Horizon Worlds looks. Take another look at the Zuckerberg screen shot. Everything about it looks like a sketch book from an art student about to be kicked out of design school. The avatar’s dead eyes, the bleak landscape, the lack of effort in drawing the landmarks – that’s not just hardware limitations.

Blocky graphics can look compelling. Minecraft and Roblox create rich and fantastic worlds with blocks the size of your head.

There are already multiplayer environments in VR that look far better than Horizon Worlds. Example: VRChat looks good and is fun to play if you’re the kind of person who enjoys hanging around with potty mouthed fourteen year olds. That’s no one’s fault; every multiplayer online game today seems immediately to be infested with potty mouthed fourteen year olds.

Maybe the Horizon Worlds team doesn’t have anyone with a shred of talent at designing game worlds.

Maybe there’s management turmoil behind the scenes. It could be the worst case you’ve ever seen of corporate committees sucking creativity out of a project.

Or maybe the team just doesn’t give a damn.

Whatever the reason, it’s rare for problems like that to be shown off so publicly by a huge company for a high-stakes project.

I’m worried about the future of virtual reality. Many people are naturally skeptical about VR for a variety of reasons – skepticism about putting on a helmet, reluctance to spend the money, a poor experience with nausea if they try it, and most importantly, a general feeling that it just doesn’t matter to them.

When Mark Zuckerberg releases a promotional photo and makes VR look stupid, people get one more data point to confirm their preconceptions. This isn’t the first time Zuckerberg has released embarrassing screen shots from Horizon Worlds, and it probably won’t be the last.

Horizon Worlds is a fringe application for the world of VR. There are many worthwhile VR games and online experiences. I love my VR gear!

But non-gamers will never hear about the good stuff. All they’ll see is snippets of news about Meta, the public face of VR in 2022.

And Meta makes VR look like it’s going to fail. Meta is shaping people’s perceptions every time it releases a stinky picture. Meta even dreams about adoption by business for virtual meetings. That has never been likely but Zuckerberg’s picture sets that possibility back by years.

Which is why I fear:

Virtual reality has no future, and it’s Mark Zuckerberg’s fault.