Personal Computers Are Just Too Hard To Use, And It Isn’t Your Fault 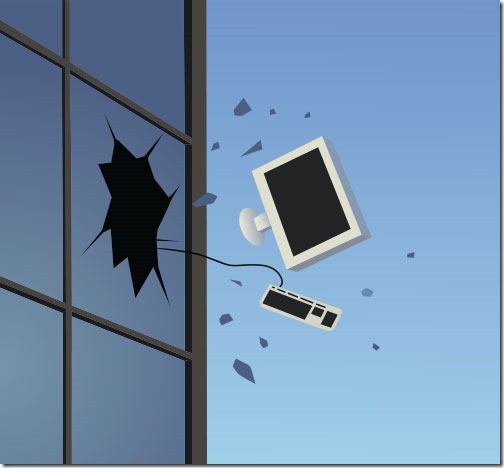 “Personal computers are just too hard to use, and it isn’t your fault.”

That was the first line in the first column that influential tech journalist Walt Mossberg wrote on October 17, 1991 for the Wall Street Journal.

PC sales are in free fall. Sales in the first quarter of 2016 were even lower than the most pessimistic projections. Apple’s laptop shipments fell 40% from the last quarter of 2015. Taken together, the top eight vendors (Lenovo, HP, Dell, Apple, etc.) saw a 20% decline in laptop sales compared to the holiday season. Sure, there’s always a drop after the 4th quarter but sales are down in any way you care to measure. Year over year? Sales of desktops and laptops were down 11.5% compared to the 1st quarter in 2015. Sales in the 1st quarter of 2016 were at the lowest point in a decade. You get the idea.

I’ve recently talked about some of the reasons for the drop in computer sales. We are engaged in a transition away from computers to phones and tablets. We’re keeping our computers longer. A generation of schoolkids is growing up with Chromebooks.

But I haven’t talked about another reason, something that everyone knows in their bones and that shapes our decisions even if we don’t think about it consciously: personal computers are just too hard to use.

Twenty years ago it was perhaps acceptable for computers to work best for people willing to learn about their fiddly bits. The hardware was changing in fundamental ways at a fast pace, from brand new processor architecture to constant changes in audio, video and networking components. Windows and Apple’s OS had to undergo wrenching changes to incorporate the security required by a persistent connection to the internet.

We’re past that. Hardware, software, networking and security are not undergoing those profound shifts. They’re being tweaked in mildly interesting ways. Oh, it’s not like development has stopped – we’ve gotten touch screens and digital pens, whee. Advances now, though, are incremental, and they have been for a long time.

We bought into the promise and we have incorporated these machines into our work and personal lives at a deep level. Computers should be getting easier to use, because that’s our fundamental need. We don’t need a digital pen. We need to be able to sit at our desks and get work done without a constant stream of frustrating and irritating encounters that draw attention to just how fragile our computers are.

For ten years I’ve been expecting that part of my work to die down. Surely, day to day computing would become easier and I’d get fewer calls to install printer drivers and troubleshoot crashes, right?

If anything, it’s getting worse.

The ball has been dropped by everybody that has any connection to technology. You can think of your own stories. Everyone can. I don’t think there’s anyone who’s having such a troublefree experience with their computers that they can’t relate to this. All I can do is tell a few anecdotes to try to give you a flavor of what my days are like. Each one has these things in common:

•  something doesn’t work that should work

Hardware makers are constantly trying to outdo each other for flashy new features when the fundamentals just don’t work. A few months ago my Surface Pro 3 stopped holding a charge while it was asleep – no reason, no idea what changed, but if I leave it disconnected from its power cord for more than a day, the battery is discharged. Microsoft introduced a new laptop, the Surface Book, which typically costs over two thousand dollars and can scale up to almost three thousand dollars. It was deeply flawed in many ways – removing the screen (its signature feature) would routinely cause the Surface Book to crash, and it had its own power and sleep issues. It’s taken Microsoft six long months to get them even close to being usable. I’ve had too many calls from people with monitors that don’t turn on from their docking stations, or computers that can’t be booted until every USB device is disconnected, or printers that drop out of sight when IP addresses change, or, or, or – I can only list a few examples or we’ll be here all day.

Microsoft has dropped the ball in Windows in oh so many ways. Microsoft deserves all the ill will it has earned with its incessant Windows 10 upgrade notices. Recently I’ve been trying to install the Windows 10 upgrade that Microsoft has pushed so hard and discovered that clicking on “Upgrade now” sometimes causes all the upgrade windows to disappear instead of actually, say, starting the upgrade. I’ve tried to figure out why some upgrades on computers running Windows 8.1 with Media Center fail with an unhelpful error message. I still run into the occasional Windows 10 upgrade that takes 10-12 hours for no particular reason. Windows 10 has many things that move Windows in the right direction – lighter system requirements, some simplified controls, a decent respect for continuity. And then Microsoft mucked it up with a half-finished Edge browser, with changed defaults so programs don’t work as expected, and quite a list of other annoying things. New features are introduced that are in your face with incomprehensible messages, serve no purpose, and are dropped a year later.

The update system is a mess. Microsoft has abandoned its Patch Tuesday schedule for updates to Windows 10 and Office, and restarts happen at apparently random times. Today I tried to decide what to tell a client whose computer had displayed a message for half an hour that it was installing one (1) update and shouldn’t be touched. It finished half an hour later. It was just an update. No idea why it took an hour. But there’s the client with no way to know if it’s frozen, if she’ll be able to do work in five minutes or half an hour or the next day, or if the update will kill the computer. Office 365 subscribers are seeing a banner across the top of the Office programs inviting them to upgrade to the latest version, Office 2016. The upgrade sometimes takes 10 minutes, sometimes takes an hour, and is absolutely the least interesting upgrade you’ve ever seen – except for the times that it destroys something about Outlook and requires me to set up a new mail profile and re-download the entire contents of the mailbox. Despite my best efforts to install updates to third party programs automatically with Bruceb Remote Management, clients still have to wrestle with updates and all too often wind up with programs that stop working or with adware and toolbars cluttering their computers.

It’s not just Microsoft. My experiment with Quickbooks Online ended after an email arrived a week after I started advising me that they’d had some difficulty and really, it would be better if I just started over. Adobe has an unbearably complex system for licensing and installing Acrobat – I cringe every time I have to explain why a small business has to keep track of multiple Adobe IDs and deal with “Adobe Creative Cloud” just to work on PDFs. I spent hours today trying to make a random third party program work. I spent hours yesterday on a different one. I’ll probably spend hours more tomorrow on another one.

Microsoft, though, gets extra demerits for the daily frustration it has caused with its disastrous confusion between two different sets of credentials (“personal,” occasionally called a “Microsoft account,” and “business or school,” occasionally not called anything else because Microsoft lost control over the name “Office 365”); two different file syncing services with the same name (“OneDrive” and “OneDrive,” occasionally called “OneDrive for Business”); a horribly complex business system for obtaining licenses for mailboxes, Office programs, and enterprise services (“Office 365”) and a horribly complex and completely different system for obtaining Office programs (“Office 365”). Not to mention the poor, overused name “Outlook” which appears on so many different programs, apps, and online services that it has become completely useless to describe anything.

And on and on. Does it tell you anything that the article I’ve written that has gotten the most feedback by far is titled, How To Delete PDFs Without Throwing Your Computer Out The Window? Seriously, all over the world, ever since Windows 8, people have to Google how to delete a file!

Okay, I’ve had a bad week. But I think the overall point is true: the manufacturers and vendors and developers have let us down. We don’t have the tools we should have to get our work done. I don’t see anything changing. Or rather, I see things changing all the time, for better, for worse, for no reason, for good reasons. The line on the graph for our overall satisfaction is not going up. If anything, it’s going down. That’s a shame. It’s also a powerful reason that computer sales are going to continue to decline as we seek out tools that are easier to use.